While short-lived, airdrops are meticulously prepared months in advance by dozens of Air Force and Army planners. Their goal: to get airmen and soldiers primed to rapidly respond to urgent combat or humanitarian efforts.

An Air Force C-130 Hercules taxies to a large hangar where about 60 Army paratroopers wait to board. Each lugging about 100 pounds of gear, the soldiers quickly line up and load into the aircraft as its four idling engines blow hot gusts over the tarmac. 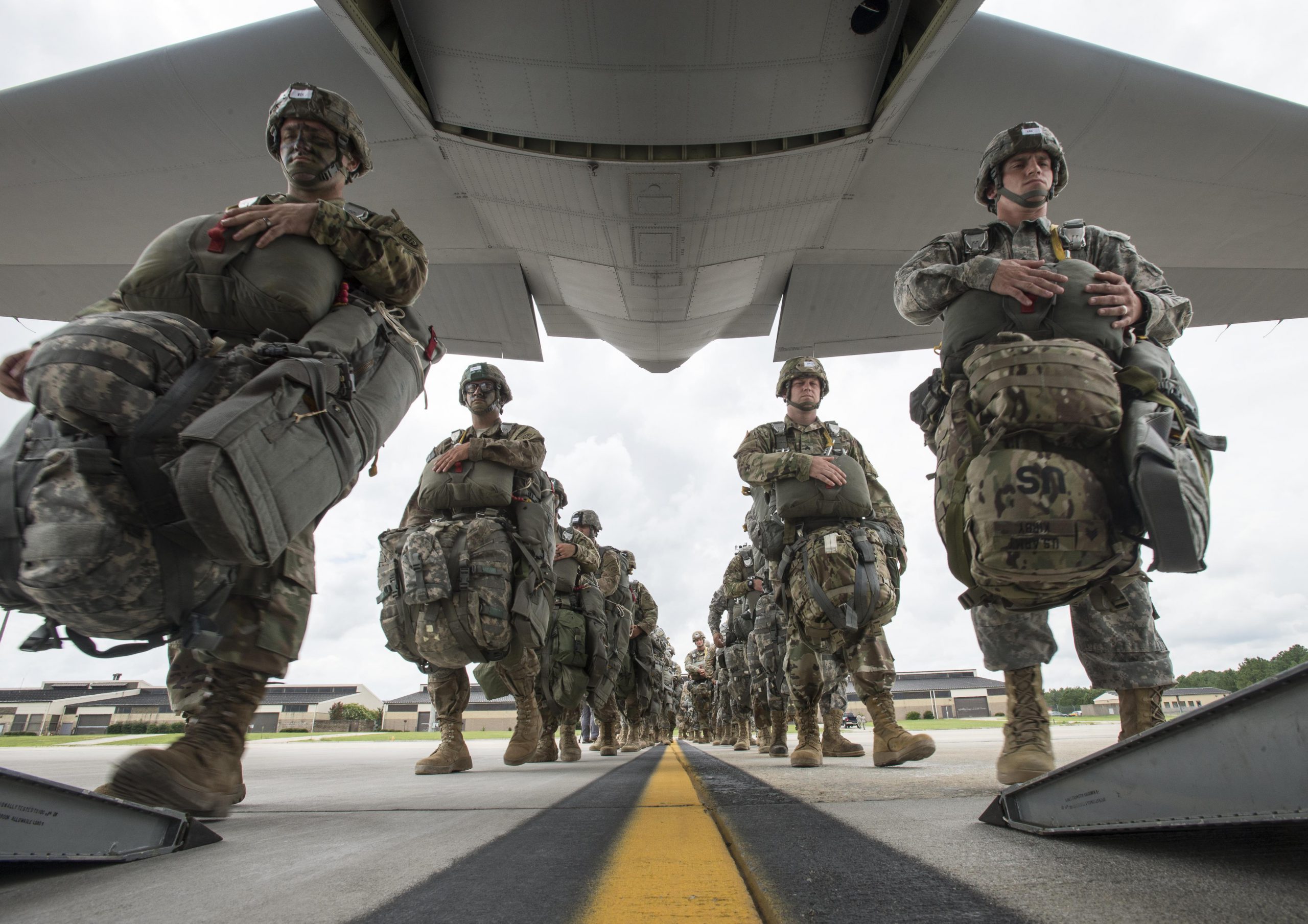 Minutes later, the plane is flying at 150 mph over the drop zone and the paratroopers jump, whisked away in a rush of fresh air during the routine training mission — one of hundreds held each year here. The C-130, requested from Little Rock Air Force Base, Arkansas, heads back to the hangar for another run.

While short-lived, these airdrops are meticulously prepared months in advance by dozens of Air Force and Army planners. Their goal: to get airmen and soldiers primed to rapidly respond to urgent combat or humanitarian efforts.

Before aircrews can fly and paratroopers can jump, several obstacles lay in wait.

“We fix a lot of problems that come up to keep aircraft flying,” he said. “We just can't predict all of them.”

Fuller and other planners create backup plans and posture forces to hedge most issues in providing effective training. But it doesn’t stop there.

Last year, planners from both services also designed an evolving two-year outlook for joint training to maximize time and funds. And just before that, quarterly symposiums were started so organizers from the Army’s XVIII Airborne Corps and its 82nd Airborne Division, and Air Mobility Command — in charge of the 18th Air Force — could meet face-to-face to shape major training events

Since then, Air Force sorties have soared to bolster the 82nd Airborne and its global response force, a battalion-sized unit capable of deploying within 18 hours. As the Air Force’s largest partner for airdrops, the Army division had about 50,300 parachute jumps in fiscal year 2015. Planners expect to surpass that number by more than 30 percent this fiscal year, which would be the most jumps in four years. 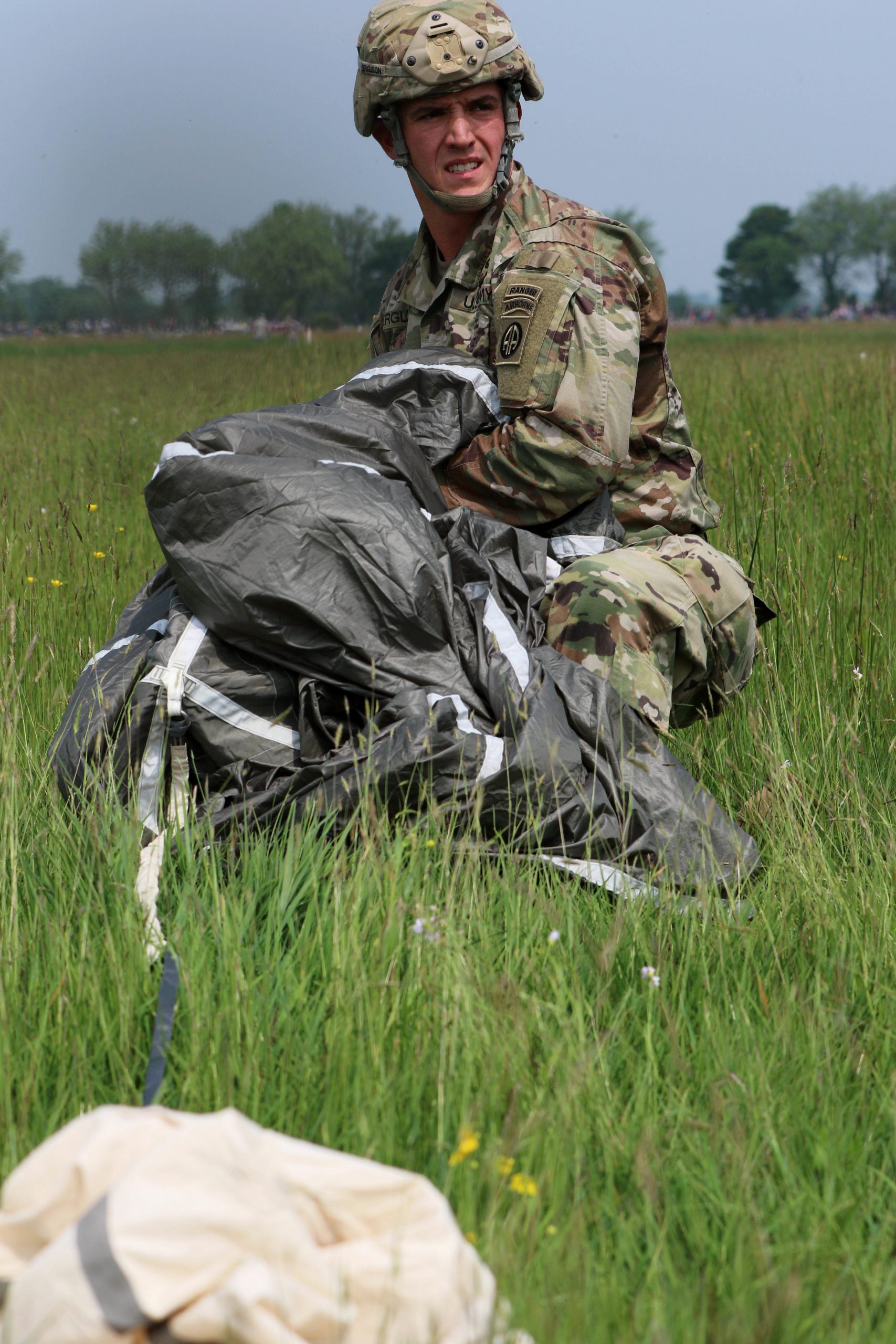 A soldier assigned to the 82nd Airborne Division gathers his parachute at Sainte-Mère l’Église, France, June 5, 2016, after a combined U.S., British and French airdrop to commemorate the 72nd anniversary of D-Day. Army photo by Capt. Joe Bush

“The chute count is higher now than it was a year ago, and we're going to continue to build on that,” Air Force Lt. Gen. Sam Cox, the 18th Air Force commander, said from the command’s headquarters at Scott AFB.

Cox was invited to sit on the Army Airborne Board, a newly formed group that oversees Army airborne operations. Having a senior airman on the board, he said, has allowed Army leaders to thoroughly discuss certain topics, like how to decrease spacing between C-17 Globemaster IIIs to drop more paratroopers in less time.

“Things like that — where an Air Force voice might matter — helps them understand the right way of looking at it,” he said. “That is just an extension of the collaboration that we've been doing over the course of the last year to try to increase strategic relationships.”

As a result, he added, the “joint integrated operational capability is better now than it has been in at least a decade.”

Each month, AMC organizers handle about 150 air support requests within the JA/ATT system.

“The purpose of it is to try to make sure that it's not only cost effective but it’s training effective and it’s joint,” Fuller said of the program.

Often, he said, more requests than available aircraft come in.

“You will very rarely have a unit that will say, ‘Well, we’re just not going do that.’ There are normally reasons why they can't do things,” Fuller said. But “there's some flexibility that can happen to still get training accomplished.”

In the Army, air support requests trickle in from individual units to division-level planners, before being pushed to AMC planners who’ll validate and post them online to Air Force wings.

Army Maj. Travis Stellfox, who arranges airdrop operations for the 82nd Airborne, consolidates requests from across the division, the military’s largest parachute force with roughly 19,000 troops.

“It's sort of like a work-request program,” he said. “We put our request into the system and then the people who will fill the request, in this case the Air Force, volunteer to perform that service for us.” 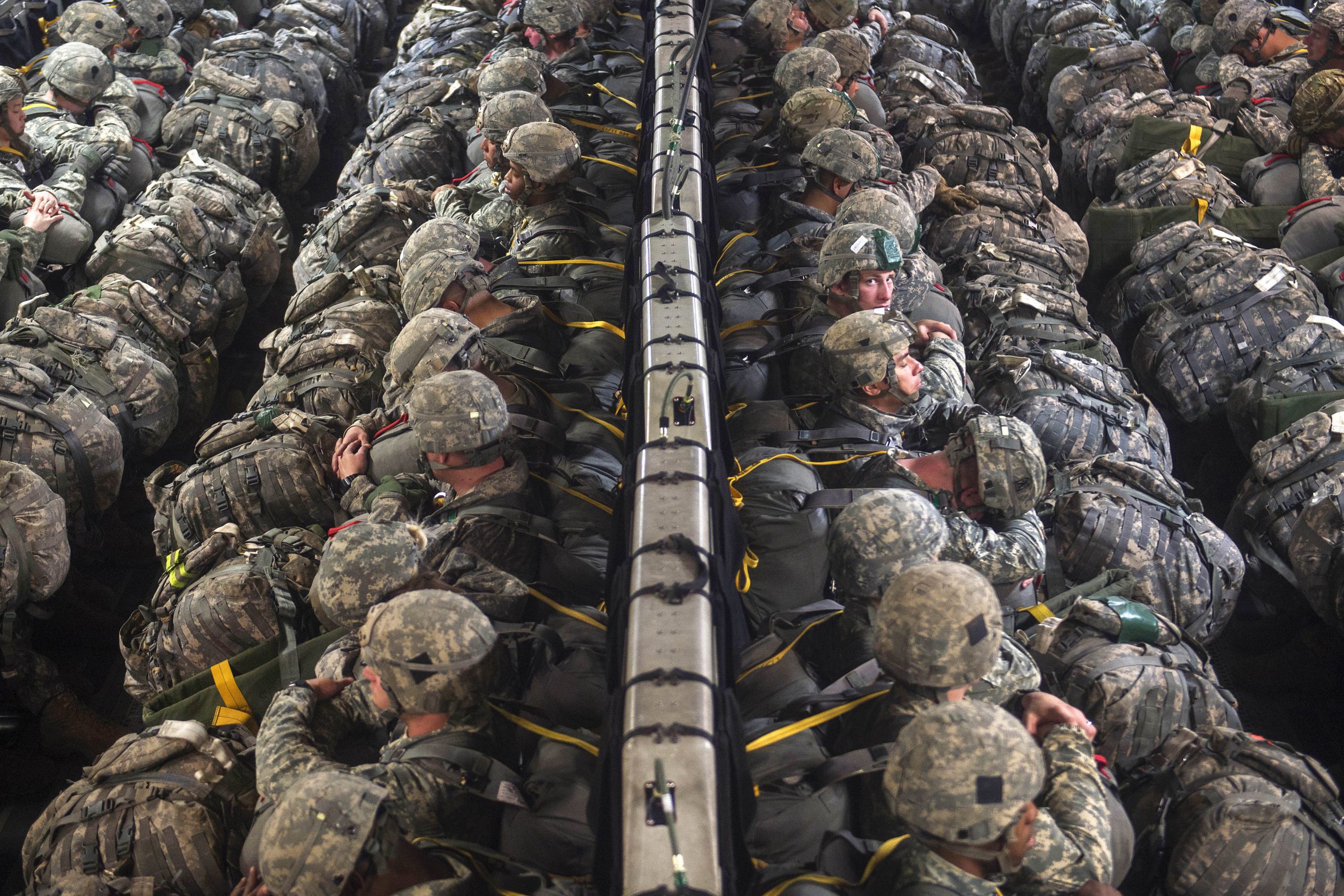 Paratroopers sit in a C-17 Globemaster III aircraft before jumping

At the division’s 1st Brigade Combat Team, Army Staff Sgt. Adam Rauls compiles a training “wish list” from the brigade’s six battalions, as part of setting up an airborne timeline to acquire transportation along with parachutes, food and other logistics.

“People who normally jump … they really don't see our side of it,” Rauls said. “There's a lot more to it.”

Requests are typically given to Rauls about 90 days out and he’ll submit them to Stellfox up at the division. In them, Army planners try to give wiggle room on dates and keep Air Force training requirements in mind. They’ll even toss in night missions or heavy platforms and bundles, which they call “candy,” to entice wings to support them.

“We try to get some of their training objectives in there,” Rauls said. “We've made a lot better effort of that than we used to do.”

Once division leaders approve the requests, Stellfox sends them off to the Air Force.

“I'm on the phone with someone from the Air Force almost daily,” he said. “That partnership has been something that really has made a difference in getting Air Force flight crews, load crews and Army paratroopers trained and ready to fight.”

After Air Force planners validate the requests, they can be viewed by Air Force wings aiming to knock out training for both services in one fell swoop.

“Increasing the ability to marry the training is one of the reasons why we have the online system,” said Fuller, the 18th AF planner. “We’re making sure that we're utilizing the assets effectively.”

Once a mission is picked up, a team of planners from all units involved is formed. An order to execute the mission is then published and handed off to the local level or, for larger missions, the 618th Tanker Airlift Control Center, which tracks the sorties of more than 1,300 mobility aircraft.

The wing flying the mission typically pays for the flights with its own training dollars. “It's basically free airdrop support,” said Dan Schultz, the center’s combat delivery director.

Since wings can only support about two-thirds of requests, Air Force planners ask users to avoid duplicating missions that may bog down the JA/ATT system or merge them in order to stretch funds.

This move has helped the average number of requests on the system drop from 180 to 150 per month compared to five years ago, Schultz said, adding that military budget cuts have also played a role. 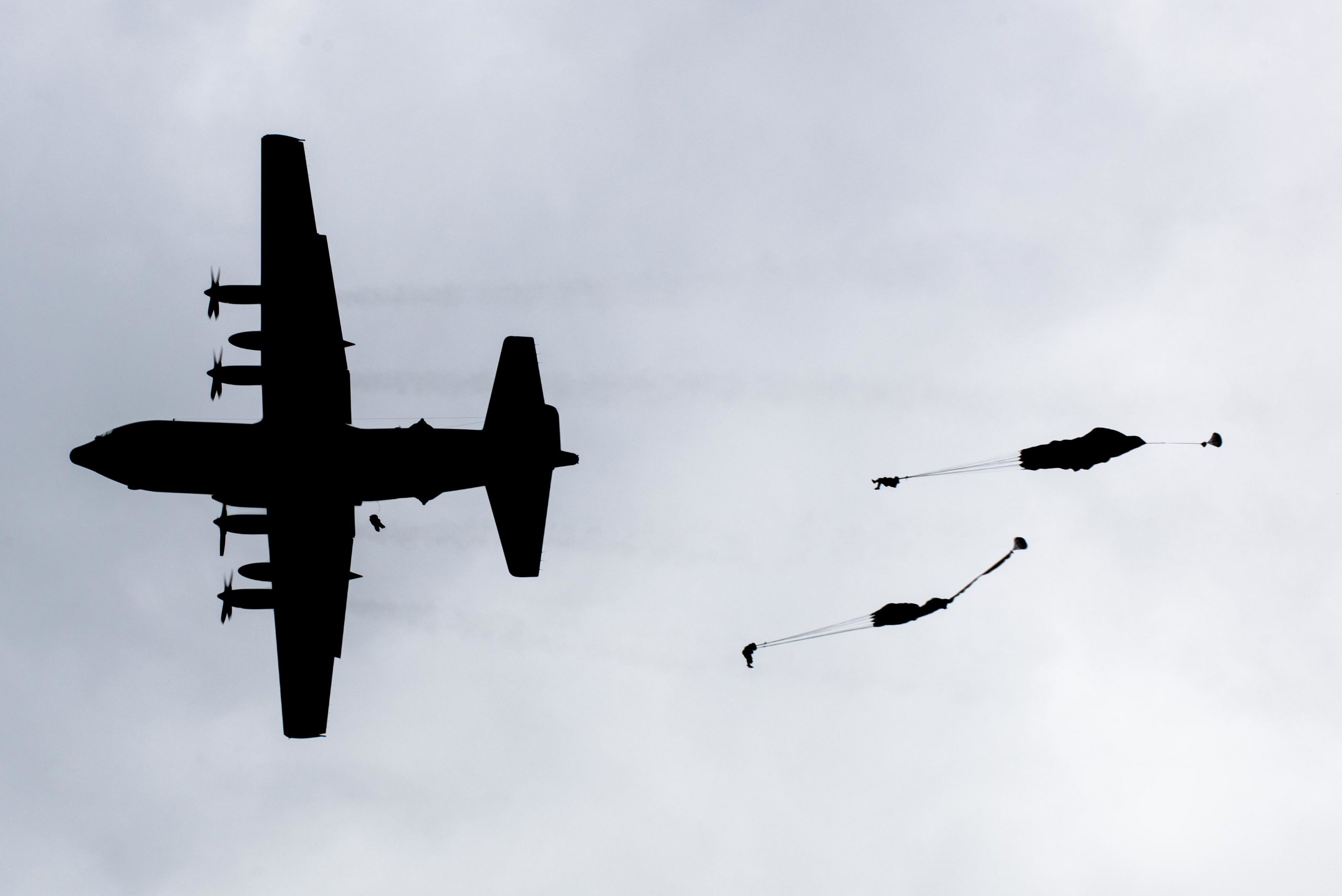 Soldiers perform an airborne insertion from a C-130 Hercules

‘Skin in the Game’

Planning gets more complicated in larger multinational exercises, such as Swift Response, which had 10 nations training together in Europe earlier this summer.

“I always joke with the young planners that it's harder to do an exercise than it is to do real world,” Fuller said, “because I have to do everything I would do real world and then I have to do all the overhead to make the exercise happen as well.”

The flight over the Atlantic Ocean and other missions during the month-long exercise offered airmen, like Air Force Capt. J.R. Wendler, a C-17 evaluator pilot assigned to the 16th Airlift Squadron at Joint Base Charleston, South Carolina, realistic drills to practice global response force tactics.

“That was phenomenal training as far as the C-17 pilots are concerned because it allows us to take off in a large formation,” Wendler said.

Swift Response challenged aircrews to put some “skin in the game” by requiring their aircraft to obtain a significant 60,000 to 80,000 pounds of fuel as they moved the paratroopers across the pond, he said. Low-level flying and airdrops in formation were also needed.

“If any of the pilots messed one of those things up it would have led to a mission failure,” Wendler said.

While training is vital to mission success, he said, operational duties may trump some chances to do it.

“We get used in a lot of different ways,” Wendler said. “This iron is usually flying downrange doing forward base supply.”

Future planning and flexibility on each side, Fuller said, looks to free up those training opportunities.

“There are difficult decisions that have to be made all the time,” he said. “I can't give everybody an aisle or window seat. Some people have to sit in the middle. But we do the best that we can to make sure that everybody has the airlift that they need.”