Approximately 140 airmen and 8 F-15C Eagles from the 142nd Fighter Wing, Oregon ANG, participated in the Sentry Savannah 17-2 exercise during January and February at the Air Dominance Center. 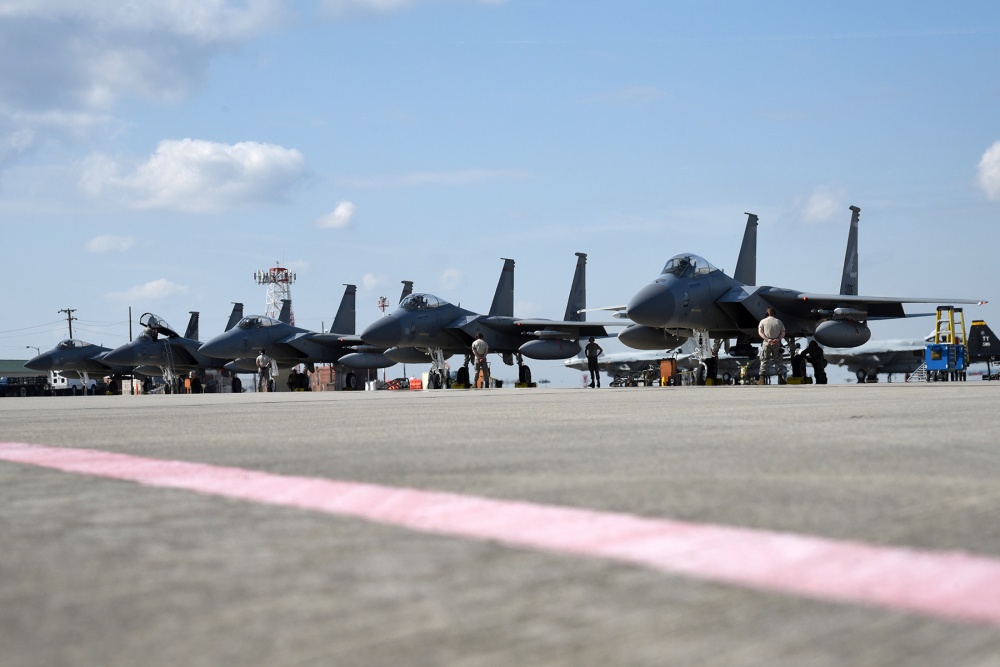 Airmen from operations, maintenance, logistics readiness, and security forces are taking part in the exercise.

“Having members from multiple units, who don’t normally work together on a daily basis, all working in a close environment, not only shows how well we work as a team to complete the mission, but also allows our members to get to know each other on a personal level,” said Air Force Master Sgt. Kevin Stone, the first sergeant for the exercise.

Each area focused on their roles, ensuring the overall mission is accomplished.

“Our job is to do everything we can to maintain a 100-percent effective rate, to make sure that our pilots get the training they need,” said Air Force Lt. Col. Todd Hofford, 142nd Maintenance Squadron commander.

For the F-15 pilots of the 123rd Fighter Squadron, “Sentry Savannah provides invaluable combat-like training not found in home station training missions,” said Air Force Lt. Col. Aaron Mathena, 123rd FS commander. “For our new pilots, this is their first experience in this kind of environment, with multiple aircraft and scenarios."

Being in a deployed location presents challenges and opportunities for learning not faced at home. However, the expertise, dedication, and professionalism of the entire team easily overcome any they face and make for an optimal training environment and a chance to demonstrate the 142nd FWs ability to deploy, anytime, anywhere, Mathena said.