The ‘imminent collapse’ is a disinformation narrative pro-Kremlin outlets employ to target audiences afraid of political and social change. It works particularly well during periods of real political challenges.

A defining feature of pro-Kremlin disinformation is its repetitiveness. For all the outrageous claims they make, pro-Kremlin outlets often sound like a broken record sticking to just a handful of basic messages for domestic and international audiences. This is not by accident or oversight, it is by design: repetition makes lies sound more believable. Pro-Kremlin disinformation outlets achieve this by sticking to a set of recurring narratives that work as templates for particular stories.

A narrative is an overall message communicated through texts, images, metaphors, and other means. Narratives help relay a message by creating suspense and making information attractive. EUvsDisinfo has identified a set of five dominant narratives used by Russian and pro-Kremlin disinformation outlets. We have seen them deployed on many occasions: for example, to interfere in elections, to spread falsehoods about the COVID-19 pandemic, and to justify the unprovoked war in Ukraine.

This summer, we are bringing you an updated overview of these narratives. Here is the fourth one, the narrative of ‘Imminent Collapse’. See also the previously published narratives: ‘The Elites vs the People’, ‘Threatened Values’, and ‘Lost Sovereignty.’

In Aristotelian rhetoric, the concept of kairos denotes a sense of urgency for action. Most speakers utilise this concept when they claim: act now, before it’s too late! In the pro-Kremlin disinformation context, the narrative of the ‘Imminent Collapse’ fulfils this function.

Russian and pro-Kremlin disinformation outlets regularly employ this narrative. Examples include: the EU is on the verge of collapse, the US is collapsing, NATO is breaking down, Ukraine’s entry into the EU would provoke the bloc’s collapse, and the financial system is collapsing.

According to the Kremlin propaganda, other factors are also hastening this alleged collapse. For example, the RIA Novosti cartoonist describes terrorism in Europe as a deadly scorpion that Europeans have unwittingly placed in their pocket. 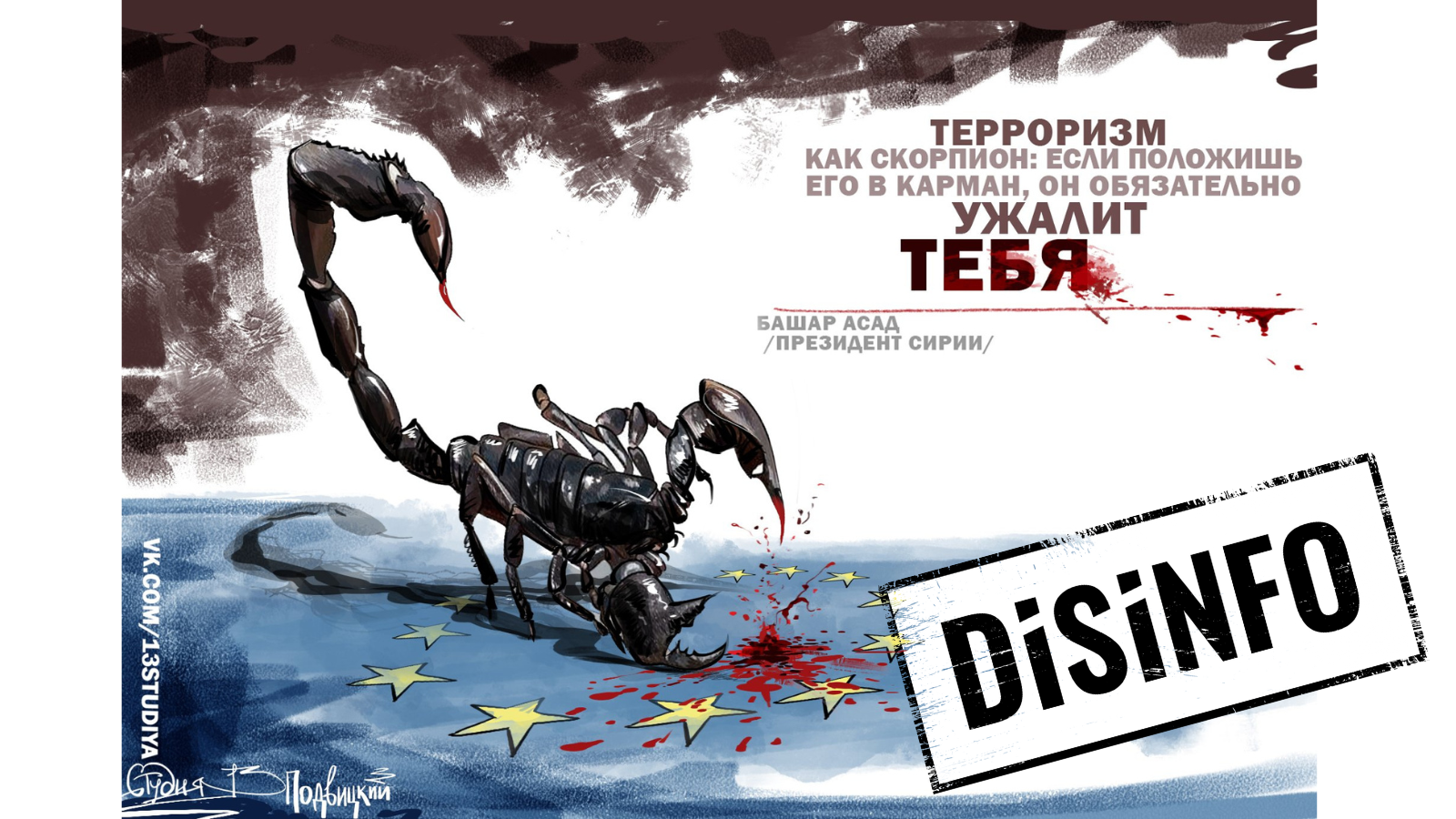 Russia has been foreshadowing Europe’s imminent collapse for well over a century. Describing Europe or EU member states as ‘on the verge of civil war’ worked just as well in 2019 as it did back in 1919.

Russian state-run outlets feed their local audiences multiple stories of how life is terrible in the EU: unrest, violence, poverty, political extremism, and so forth. All to create a sense of comfort for the audience of living inside Russia, apparently not on a verge of an imminent collapse, in a clear contrast to the situation elsewhere.

The ‘imminent collapse’ is a hard-working narrative that usually resonates well with both local and international target audiences, despite the fact that there has not been a civil war in the EU, nor has Europe collapsed. By many metrics, the bloc continues to flourish.

Target audiences that – legitimately or not – already fear political and social turmoil in their countries are particularly susceptible to this narrative.

Thus, this narrative works especially well during periods of real political challenges, like during the migration crisis in the fall of 2015, during the pandemic, and now during the Russian invasion of Ukraine.

The enormous influx of migrants to Europe certainly posed a major challenge to European governments, but Russian and pro-Kremlin outlets portrayed the situation in grossly overstated and apocalyptic terms, reporting about the crisis as though it constituted a systemic collapse. Of course, the system survived intact, but the image of a collapse lingers on in Kremlin parlance.

During the early stages of the COVID-19 outbreak, in March 2020, nationalist philosopher Aleksandr Dugin relished in witnessing the collapse of Western democracies:

The global capitalist society collapsed immediately. Not everyone has understood it yet. But they will very soon. This means that the very substance of Liberal Globalism has collapsed, the world of office workers and beauty bloggers, transgender persons and climate activists, human right defenders and hipsters, migrants and feminists.

The approach was also visible in Russian and pro-Kremlin coverage of the Yellow Vest protests in France. The right to express discontent with government and politics is an integral part of democracy, and the citizens of any European state enjoy the right to protest peacefully. The Yellow Vest movement and other expressions of discontent like it belong to the European democratic tradition. They are not proof of the breakdown of the system, but of its ability to reinvent and rejuvenate itself.

Despite their lack of success in prophesising, pro-Kremlin fantasising of an imminent collapse of their perceived adversaries has continued also after the Russian invasion of Ukraine. In pro-Kremlin outlets’ disinformation, the war in Ukraine is just a Western ruse to postpone the ‘inevitable collapse of global capitalism.’

The ‘imminent collapse’ narrative is also sometimes used to lament the alleged breakdown of European moral values and traditions. Russian and pro-Kremlin disinformation outlets for instance regularly describe children’s rights in Europe as an attack on family values. Their bottom line: Europe is dying by abandoning all decency and morals.

However, the reports of Europe’s death may have been greatly exaggerated. Navigating a tumultuous economic situation, wading through a global pandemic, or witnessing a heated political landscape should not be mistaken as an existential collapse.