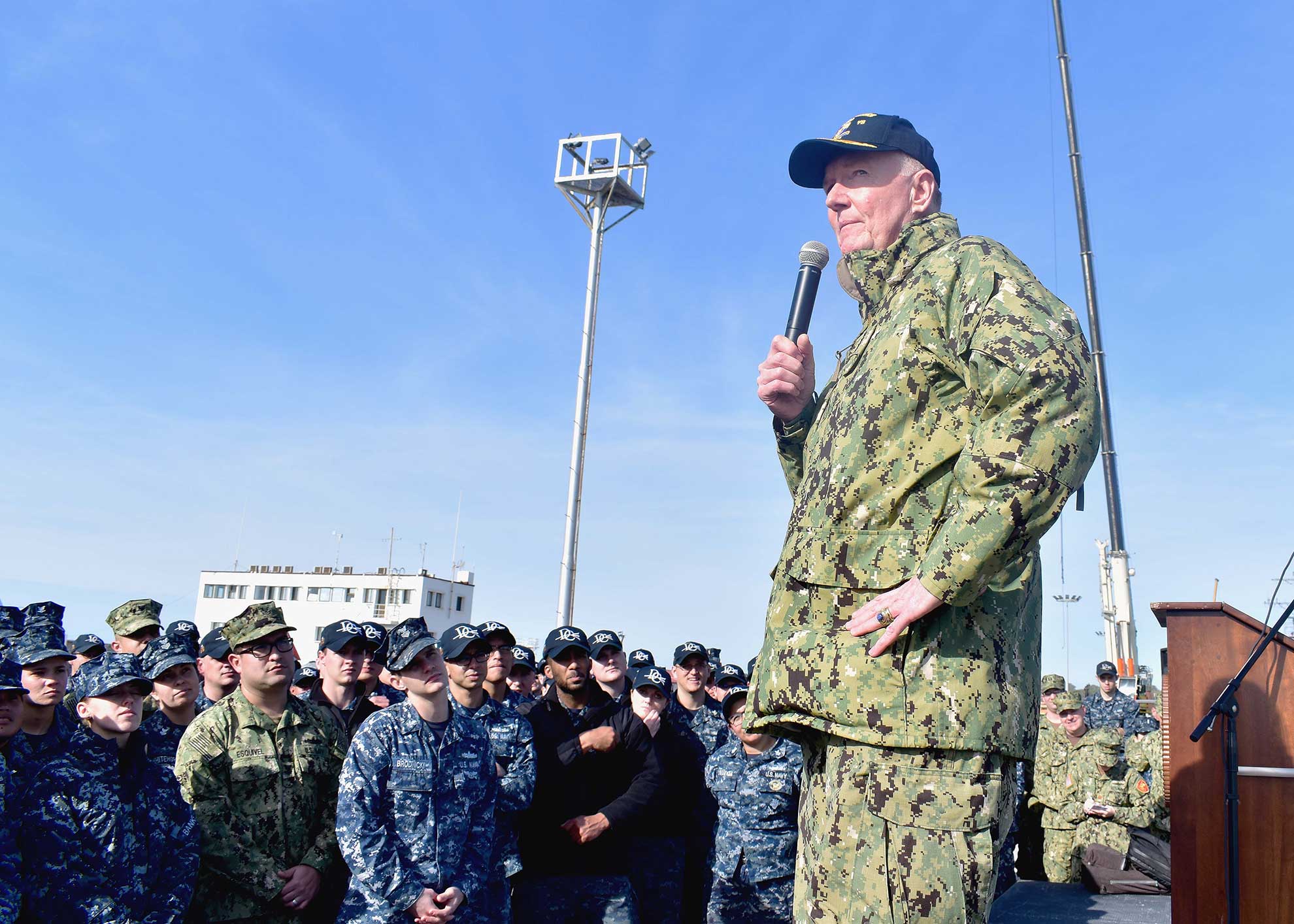 Foggo, a U.S. Naval Academy graduate who has spent 37 years on active duty, is the grandson and son of Canadian military officers who fought in World War I and World War II respectively. He conceived the podcast as a way to have an ongoing dialogue with U.S. and allied personnel. His first podcast focused on his five main focus areas, or “big rocks” as he calls them because of the “heavy lifting” they require: theater anti-submarine warfare (ASW), integrated air and missile defense (IAMD), forward-deployed naval forces, countering violent extremism, and enhancing African maritime security.

“These are all very challenging areas that we must be both subject matter experts and experts in execution at the strategic and tactical level,” said Foggo. “This theater goes from… the North Pole down to the Cape of Good Hope in South Africa, and from 45 [degrees] west in the middle of the Atlantic Ocean all the way out to the shores of the Crimea [Ukraine].  With the Arctic Ocean, the Atlantic Ocean, the Baltic Sea, the Mediterranean Sea and the Black Sea, and parts of the Indian Ocean as part of our theater of operations.”

Foggo said that in recent speeches and writings, he has emphasized that the United States is immersed in the “Fourth Battle of the Atlantic,” due to the increased activity of the Russian submarine force.

“The activity in submarine warfare has increased significantly since the first time I came back to Europe and since the Cold War.  The Russian Federation navy has continued to pump rubles into the undersea domain, and they have a very effective submarine force,” said Foggo.  “So theater ASW, big rock, is very important, and a combined arms game that involves all of us.”

Foggo then focused on U.S. anti-ballistic missile and IAMD capability, calling it “the best in the world,” and emphasizing its strategic importance and ongoing efforts to integrate with allies. 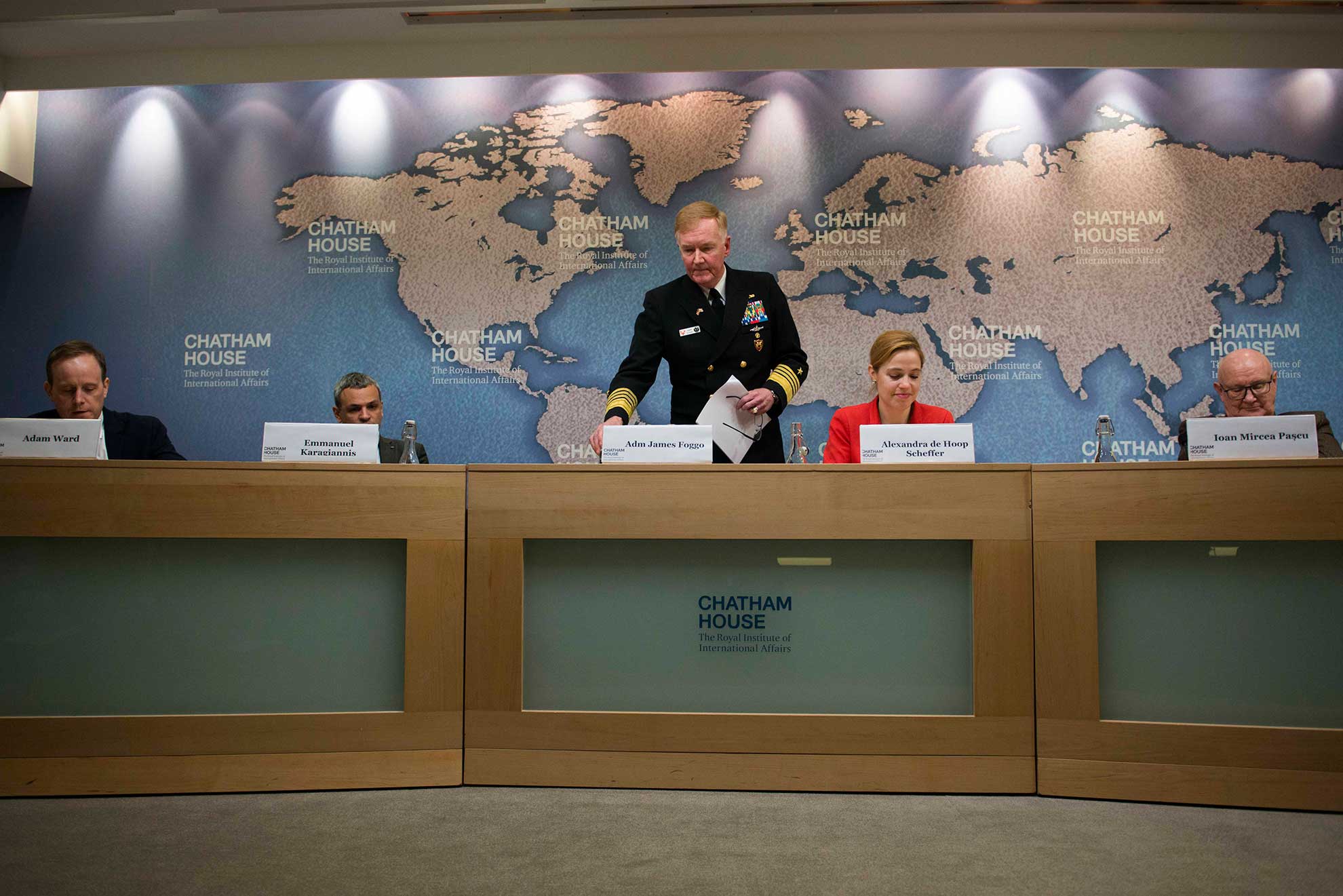 “We are defending against any kind of malign influence or launch of Iranian ballistic missiles, but it is a skillset that many navies in Europe would like to have their own indigenous capability.  And so when we do these demonstrations, we are not alone.  Formidable Shield 17 was an incredible coalition of the willing, who came to the range in the Hebrides off of the coast of Scotland for a couple of weeks,” he said.

“And we did many exercises in which that flotilla was attacked by anti-ship cruise missiles, and allies and partners fired their own defensive weapons to protect a high-value unit that was looking for the ballistic missile coming over the horizon.  So tremendous success, part of what we do, and a big reason for having four guided-missile destroyers in Rota, Spain.”

Mention of Rota led to discussion of Foggo’s third focus area, forward-deployed naval forces, which is closely related to ballistic missile defense and other important missions that require steady presence and rapid reaction.

“We couldn't do all the missions that we do without our forward-deployed forces in Europe and we couldn't do this without partners, either,” said Foggo. “When I talk about missile defense, let's not forget the incredible collaboration we get from our Romanian partners with our missile facility in Deveselu, and we are building another missile facility ashore, and it's like an Aegis-class ship ashore in Redzikowo in Poland.”

Foggo also mentioned ally and partner support to the FDNF forces.  “Our FDNF forces afloat are in Rota, Spain.  We wouldn't be there if it weren't for the incredible generosity and relationship we have from our host nation in Spain.  And that is a port facility that is located in an area that gives us access to the North Atlantic, to the Baltic, to the Mediterranean.”

“On countering violent extremism, this is something that we face every day.  And we see attacks throughout the European theater and the African theater, and even in our own country and Canada.  And we defend forward against that.  That's the reason we're here.  We want to take that fight to the violent extremists and keep them out of our own sovereign countries.  And when I say that, I mean all the countries of NATO and the countries of North America that are part of NATO as well,” said Foggo.” The U.S. Navy continues to combat violent extremist organizations by dismantling networks of terrorist organizations in Syria, Iraq, Libya and elsewhere. We've done a lot of work off the Somali coast, and I think that's been very successful at tamping down piracy operations there to a bare minimum.”

For the final “rock,” Foggo emphasized the dramatic progress that has been made in recent years.

“On the final big rock, enhancing African maritime security, I've been doing this now in this theater since 2009 when I worked at Supreme Headquarters Allied Powers Europe (SHAPE) headquarters, and I saw the Africa partnership stations stand up.  I saw the Express series exercise,” he said. “It's our signature series of exercises around Africa.  We do Cutlass Express in East Africa, we do Phoenix Express in North Africa, and we do Obangame Saharan Express in the Gulf of Guinea in West Africa, all with the intent of enhancing the quality of the maritime domain of our African partners. And since 2009 to present, their progress has been like night and day,” Foggo continued. 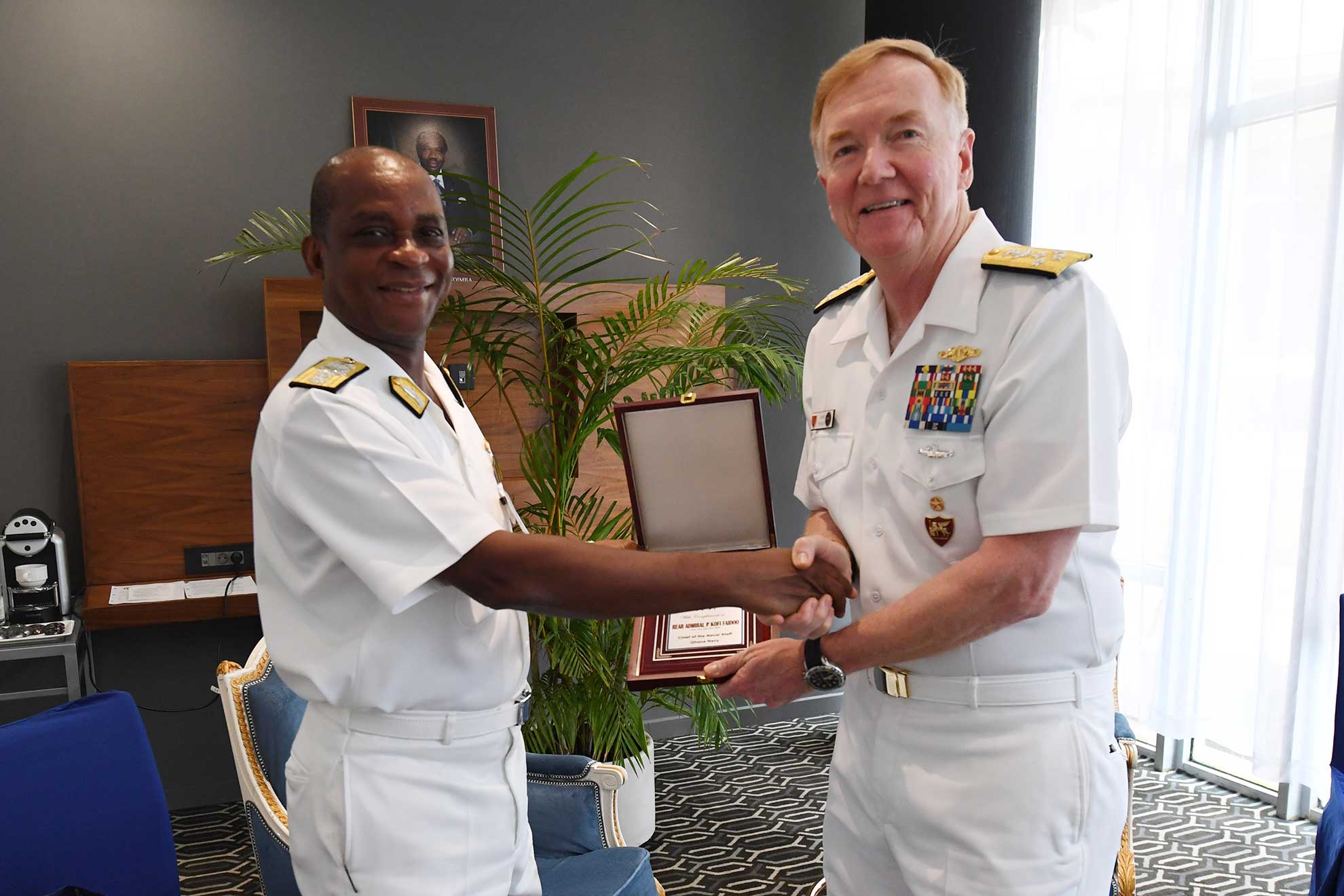 “We have gone from a time when the African partners either did not have the facilities or the capacity, in terms of ships, to go out and operate. They now have a robust series of facilities, radars that can coordinate and collaborate across territorial lines.  They have an agreement, called the Yaounde Code of Conduct, in the Gulf of Guinea.  And they have vessels that can get under way and challenge nefarious activity in the maritime and counter the pirate activities taking place, whether it be in the Gulf of Guinea, a new surge there, or maintain the status quo where we have beaten piracy on the east coast of Africa, off of Somalia.”

In challenging times, the hard work put in by the warrior-experts who contribute to Foggo’s five focus area will see those efforts pay off in the form of increased security throughout the vast theater of operations, which covers 105 countries, 20 million square nautical miles of ocean that touches three continents, and a combined population of more than one billion people.  The podcast will continue to be a way for Foggo to communicate to those under his command, and to the world, about his priorities. 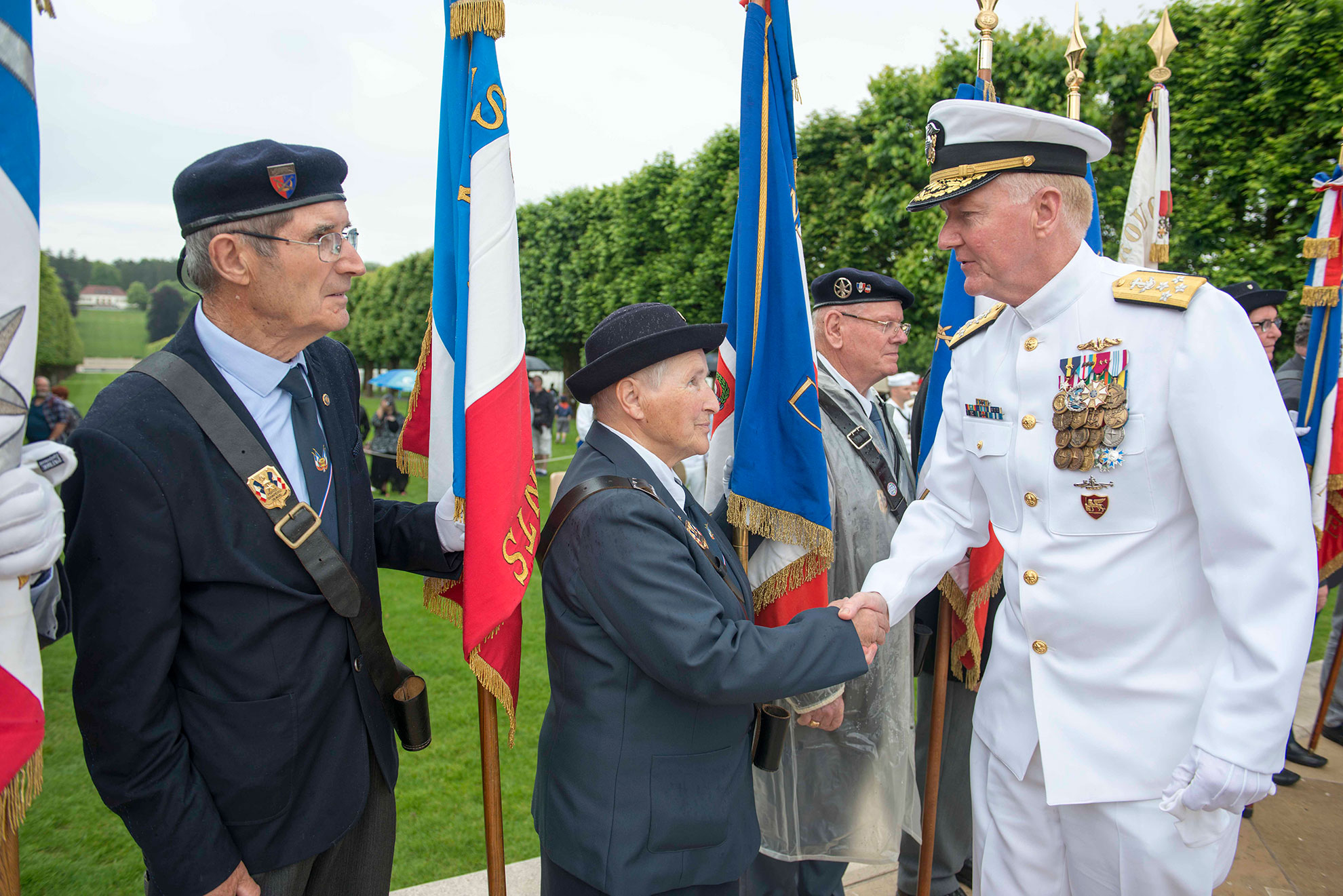 "I'm very thankful for the opportunity to discuss what is going on in these two important theaters," said Foggo. "It is important to connect with great work being done in Europe and Africa by the U.S. Navy, our allies, and our partners."

“On the Horizon: Navigating the European and African Theaters” will be available for download August 30th, here on Sound Cloud and here on Speaker.com.

U.S. Naval Forces Europe-Africa/U.S. 6th Fleet, headquartered in Naples, Italy, conducts the full spectrum of joint and naval operations, often in concert with allied, joint, and interagency partners in order to advance U.S. national interests and security and stability in Europe and Africa.