Washington  D.C. — (ANS) — April 6, 2018 — U.S. Soldiers and allies on the Western Front in 1918 faced a dreaded but expected bloody German Spring Offensive, which the Germans referred to as the Kaiserschlacht, or Kaiser's Battle, according to Eric B. Setzkorn, a historian at the Center of Military History. 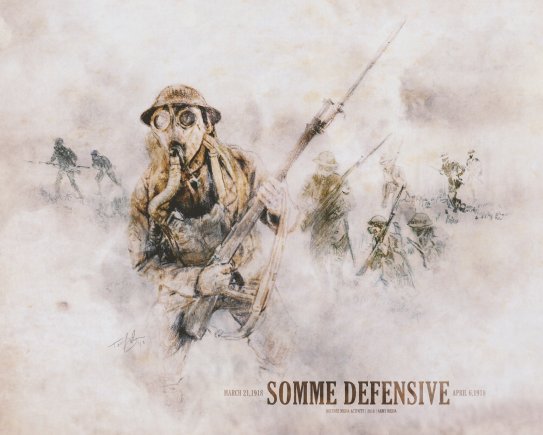 The World War I Spring Offensive, now exactly a century old, was anticipated, he said, due in large part to two events: the collapse of the Russian army on the Eastern Front and the deployment of American forces to Europe, following a year-long effort to recruit, train and ship them over. Victory in the east allowed Germany to shift divisions westward, and the Germans were particularly eager to employ them before the U.S. divisions could reach the front, he said.

The Spring Offensive began March 21, with just one American division, the 1st Infantry Division, at the line of trenches that marked the front line. The other divisions — the 2nd, 42nd and 26th — were still in their final phase of training by the French in a quiet sector away from the front. That meant that the majority of allied combatants on the Western Front were French, French colonials, British and Commonwealth forces.

With reinforcements drawn from the Eastern Front, the Germans were able to bulk up and send 192 German divisions to the Western Front, outnumbering the 180 British and French divisions there, Setzkorn said. After a massive enemy bombardment by more than 6,000 cannons, 72 German divisions smashed into the British in the Somme sector of the line in the north of France. That line of trenches extended from the English Channel in Belgium, through northern and eastern France to the Swiss border.

After a week of nearly constant attacks, the German army had advanced more than 40 miles, creating a huge salient in the line just north of Paris and inflicting more than 175,000 casualties on the British. The fact that the Germans advanced 40 miles was considered significant because for the preceding few years, the lines moved very little, if at all.


The German efforts to drive a wedge between the British and French armies and push the British back to the English Channel appeared to be working. Although British forces rallied to block the Germans at Amiens, France, the threat remained severe, Setzkorn said.

"For the first time since 1914, panic gripped the allies, who feared that the Channel ports or perhaps even Paris could be lost," he noted.

American participation in British defensive operations remained limited throughout the Spring Offensive, which lasted until April 6, he said. Altogether, just fewer than 3,000 Americans participated in this campaign.

The 12th and 14th Engineers maintained and operated light railways in the advance zone of the British Third and Fifth Armies and later helped to construct trenches north of Amiens, he said.

Elements from the 3d Division's 6th Engineers had been assigned to the British Fifth Army in February for bridge construction near the town of Péronne, France. When the Germans attacked, the engineers mined the recently-constructed bridges over the Somme River and withdrew with the British.

After rigging an engineer dump at Chaulnes for demolition and preparing new defensive positions at Démuin, the 545-man detachment of the 6th Engineers deployed to the front west of Warfusée-Abancourt on March 27. They were issued British rifles and joined British units to hold the line.

For four days, the British and Americans weathered intense shellfire and repulsed a German attack, suffering numerous casualties in the process. The 6th Engineers finally withdrew on April 3, he said.

The 17th, 22nd, 28th, and 148th Aero Squadrons of the U.S. Army Air Service also served in the Somme defense, operating as part of the British Royal Flying Corps. Although the Spring Offensive ended April 6, the German 1918 offensives were far from over, he said. In the coming months, thousands of American Soldiers would be called on to join the battle to block follow-on German attempts to win the war.