High above a cold and dusty mountain range in Afghanistan, an Air Force F-16 Fighting Falcon receives fuel from a KC-135 Stratotanker flying at more than 30,000 feet.

High above a cold and dusty mountain range in Afghanistan, an Air Force F-16 Fighting Falcon receives fuel from a KC-135 Stratotanker flying at more than 30,000 feet. Many man hours and quality control processes are completed by airmen and civilian contractors here to ensure the fighter jets receive the necessary fuel to complete their missions. 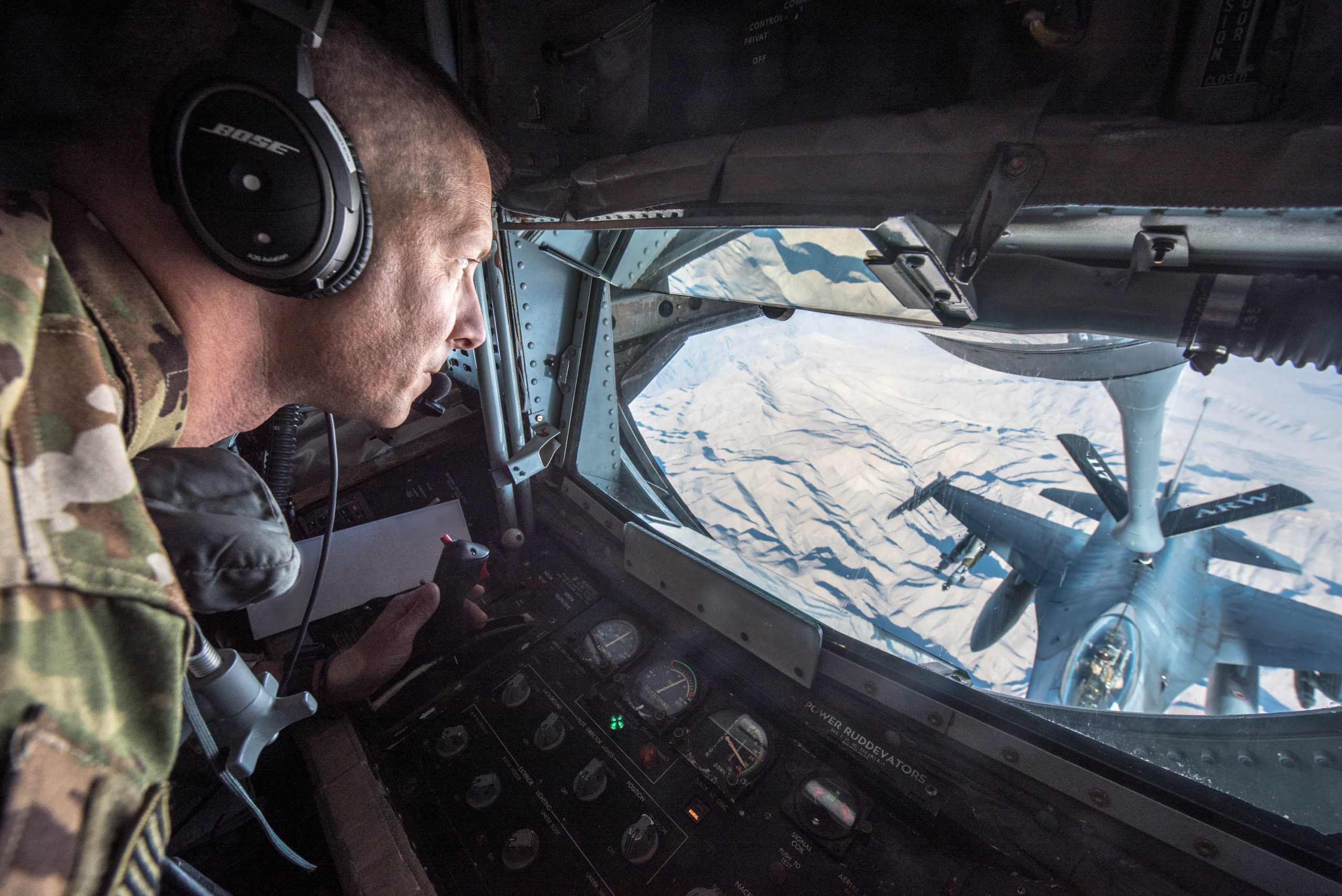 JP-8, the jet engine fuel used by the Air Force, starts as Jet A-1 fuel that is brought in by ships. A fuel system icing inhibitor and corrosion inhibitor are added at the port to turn it into JP-8. It is then stored at the port until the 379th Expeditionary Logistics Readiness Squadron Fuels Flight requests it for resupply here. The aviation fuel is then stored in holding tanks on base and pushed to fill stands and hydrant facilities for customers to use.

During this process, the fuel is filtered and tested multiple times to ensure a quality product for Air Force assets. From the holding tank facility, JP-8 flows through a filter separator on the issue side and again through the receipt side at the base storage facility. The repeated filtration ensures that the fuel is clean and within standards until it reaches the end user the aircraft.

Planes here are normally fueled using 6,000-gallon R-11 tanker trucks, likewise R-12 hydrant hose trucks connect to outlets in the ground on the flightline. The R-12 is the quickest and most efficient method of fueling because it only needs to connect to the hydrant and the plane once until the aircraft takes its required load. After hooking up to a hydrant, it pumps fuel into planes at a rate of around 750 gallons per minute.

In the past six months, the fuels flight has safely overseen the throughput of 195 million gallons of JP-8, valued at $400 million of fuel. They have also received 4.5 million gallons of diesel and gasoline [ground fuel] for the more than 1,500 ground vehicles on base. The flight is also responsible for all of the liquid oxygen for aircrew safety systems and liquid nitrogen for aircraft tires here and several forward-operating bases across the area of responsibility.

“Our job as the professional fuel handlers here at AUAB is to never run out of it, contaminate it or spill it,” said Air Force Master Sgt. Jory J. Ohmer, a fuels contracting officer representative with the 379th Expeditionary Logistics Readiness Squadron.

The KC-135s here are all fueled to a standard ramp fuel load, meaning that each aircraft has the same amount of fuel, regardless of the mission it is supporting. This is to decrease the burden on scheduling, the fuels flight and maintenance crews and to increase operational flexibility. 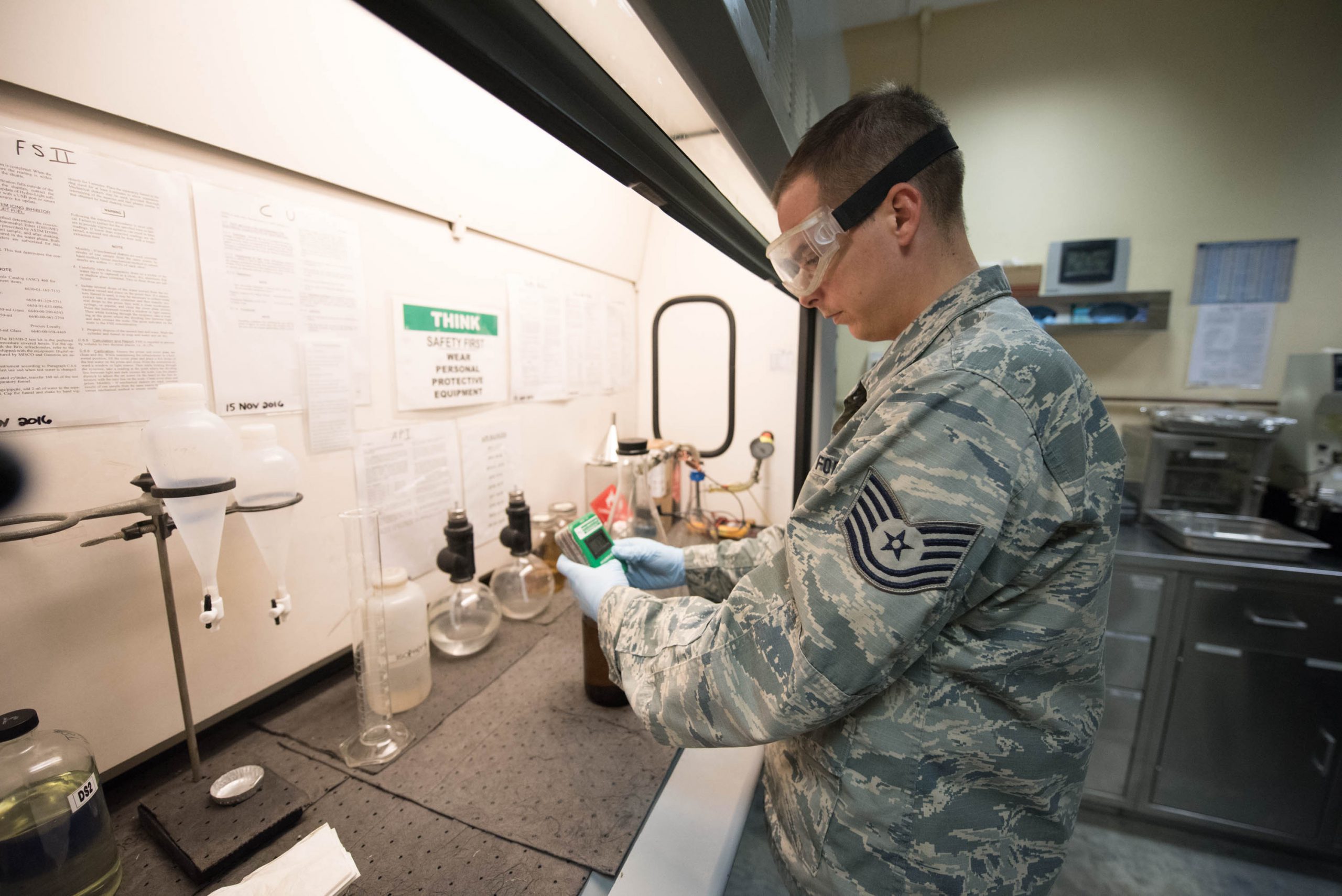 “If an aircrew steps to one airplane and encounters a maintenance issue that can’t be fixed during the preflight, the crew can step to a spare airplane and complete the scheduled mission because the airplanes all have the same amount of fuel on them,” said Air Force Lt. Col. Cory L. Clagett, the commander of the 340th Expeditionary Air Refueling Squadron.

Depending on what season it is here, the ramp loads can vary because the weather determines how much fuel aircraft take on their missions. Planes can take off in the winter at greater weights because the air is denser and the tanker’s engines perform better.

Another reason to keep a standard amount of gas on the tankers is because sometimes the aircrews may not know how many receivers they will refuel and how much fuel they will offload to those receivers. Though aircrews develop a plan based on who their receivers are going to be before a mission launches, plans can change quickly.

“We don’t always have that luxury,” Clagett said. “We don’t necessarily know today who our receivers are going to be tomorrow. Right now, those plans are being finalized within the [Combined Air Operations Center].”

The KC-135 Stratotankers fly across U.S. Central Command’s area of responsibility. This includes missions in Afghanistan, Syria, Iraq, the Horn of Africa and the Persian Gulf. They can refuel a full spectrum of aircraft, including, but not limited to, Air Force B-52 Stratofortresses, F-16 Fighting Falcons, A-10 Thunderbolt IIs, C-17 Globemaster IIIs, U.S. Navy F-18 Hornets, and coalition fighters such as the British Royal Air Force’s Mirage.

“I truly believe if it weren’t for the men and women of this squadron, we could not effectively prosecute the war,” Clagett said. “With this squadron alone offloading nearly two-thirds of the gas in the AOR, it’s pretty obvious how important our airmen are to the air war out here.”

With multiple sorties every day, there is always a KC-135 tanker in the air over the region. Like a gas station, the 340th EARS is open 24 hours a day, 365 days a year.

“The lights are never off and it’s always a beehive of activity around here,” Clagett said. “Operations don’t slow down just because it’s the weekend or a holiday. Day or night, weekend or weekday, it’s the same mission for our staff and aircrews. I couldn’t be more proud of them. Our airmen are unquestionably mission-oriented, hardworking, dedicated and non-stop focused. … They make it happen and crush the mission every day.”