The Chief of Naval Operations Adm. John Richardson returned to the Naval Postgraduate School (NPS) to impart his vision of overcoming the biggest challenges facing today’s Navy during the latest Secretary of the Navy Guest Lecture (SGL). 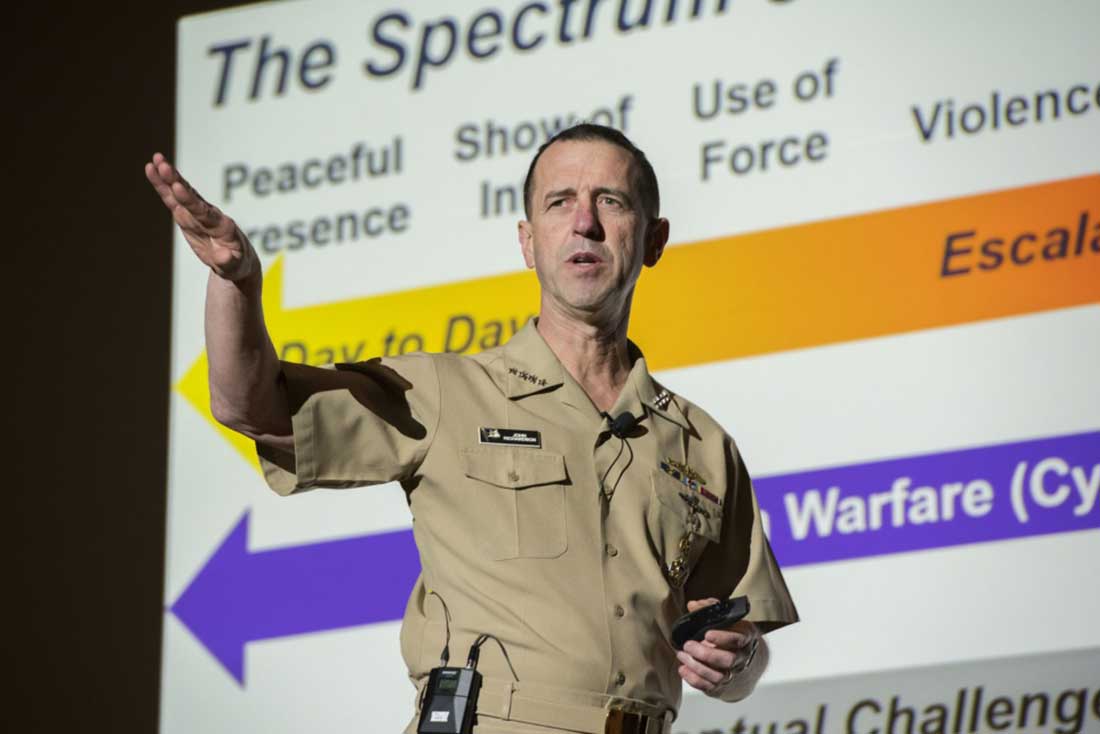 “What a pleasure it is to be back here … We scoured the entire planet for the right person to lead this institution and I am confident we made the right choice. I very much look forward to your tenure,” Richardson said to Rondeau.

Richardson addressed the recently-released second version of his “Design for Maintaining Maritime Superiority,” coined Version 2.0, a 20-page document which reaffirms the growing presence of great power competition and seeks to align the U.S. Navy’s strategic guidance with both the National Security Strategy and the National Defense Strategy.

“One of the reasons that we put out Version 2.0 is that so much has happened since we put out the first version in 2016,” said Richardson. “I say ‘we’ very deliberately, because even though I had the privilege of signing this document as the Chief of Naval Operations, it really represents the collective input from all of Navy leadership.

“The thought driving the publication of the first version is that, even in 2016, we were getting the sense that things were changing,” he continued. “We were entering an era of great power competition and we laid out a number of tasks for ourselves … As we had achieved many of those goals, it was time to come up with the next set of objectives so we could continue to make progress down this track.”

Version 2.0 maintains that it has been decades since the U.S. last competed for sea control, sea lines of communication, access to world markets, and diplomatic partnerships. Richardson asserts that U.S. Naval forces must adapt to this change and respond with urgency in order to aggressively compete in a modern security environment.

“The last time we dealt with great power competition was about 28 years ago, and a lot has changed since then,” said Richardson. “The rivals have changed. The rise of China has presented us with a lot of unique obstacles, and even though Russia is still around and some things are reminiscent of the Cold War, most are different."

He added that the rules of the game have changed.

“The pace of change is quicker now than ever before in the 10,000 or more years that human beings have tackled the seas. In fact, since the end of the Cold War, maritime traffic has multiplied by four and carries 90 percent of the world’s GDP, which has doubled in the past 25 years. All while, the maritime domain continues to grow and new challenges have presented themselves such as Information Warfare.”

Richardson noted that the rapid growth and adoption of information technologies have opened a new frontier in warfare, as well as engendered particular interest on such issues as technological superiority and space. Correlating with these issues, the goals of Version 2.0 encapsulate a way ahead for the Navy to become a more agile force that operates at different levels of intensity in different domains at the same time.

“If we want to take on the challenges that we face, then we have to restore agility, and there are multiple dimensions to doing that,” Richardson said. “One is conceptual agility. We have to be become more creative and start thinking outside of the box, and it is places like NPS that help us do that.

He also said there is technological agility.

"We need to be able to move our technological capabilities into the hands of the warfighter at a relevant speed, because in the modern information age it matters to be first. That means we need to have a way to prototype, produce and deliver our systems before our adversaries.”

Richardson noted that the Navy must transform into a giant, learning engine to achieve faster innovation.

“The Navy has to return to the rate of innovation and development we saw during World War II, and that includes our schools like this very special place, as well as our exercises and experiments,” he said.

In closing, Richardson brought up the history of the U.S. Navy and how our decisiveness and our values of honor, courage and commitment have yielded the greatest Navy in the world. Moving ahead, he indicated that NPS plays a critical role in the Navy’s future.

“There are many universities in the world and they are all solving problems,” Richardson stated, “But this university is solving our Navy’s, and our nation’s, problems.

“This is what is unique about this place. Because of your work here, we will continue to be the Navy that is the safest for our Sailors, the best partner for our allies and the worst nightmare for our adversaries,” he said.

Before closing his presentation, Richardson fielded several questions from the students in the audience.

NPS' Secretary of the Navy Guest Lecture program provides a series of professional lectures by senior leaders throughout defense, government, industry and academia designed to help the university's students and faculty link their studies, teaching and research efforts to the defense needs of the nation.