Identifying Cyber Threats : There’s a potential pipeline leak, so a team is dispatched to investigate. It was a false alarm, but then another alarm goes off, then another. This scenario is very real…

Joint Base Elmendorf-Richardson — Alaska — An electronic sensor along the more than 800-mile Trans-Alaska Pipeline sounds the alarm.

There’s a potential pipeline leak, so a team is dispatched to investigate. It was a false alarm, but then another alarm goes off, then another.

Soon, every sensor is chiming.

This scenario is very real, and all it takes is one malicious cyber attacker to make it happen.

As part of Arctic Eagle 2018 in Alaska, Air and Army National Guardsmen trained on how to identify a potential cyber threat.

“We wanted to test what the operational impacts would be if this happened,” said Scott Moreland, exercise planner, Arctic Eagle 2018. “This will test the Guard’s ability to identify when it has happened and make sure it is being communicated.”

Arctic Eagle 2018 was an optimal time to conduct such a scenario. More than 1,100 guardsmen from multiple states came to Alaska to participate in the multi-facet exercise.

Multiple cyber-based scenarios were part of the exercise. The first being a satellite crash and practicing cyber hygiene, followed by exercises on cyber security and cyber protection.

“We don’t currently have a real-world cyber security mission, so what we presently do is called cyber hygiene, which is focused on training, awareness and outreach,” said Capt. Robert Gordon, Director of Computers and Communications, Alaska National Guard. “If a threat actor, wanted to know what the National Guard is doing, they can track that through their social media. That is where cyber hygiene can help stop the attackers.”

Lt. Col. Thomas Pries, Director of Space and Integrated Air Defense, Washington Military Department, made the trip from the state of Washington o discuss the work being done in his home state in the cyber security domain. 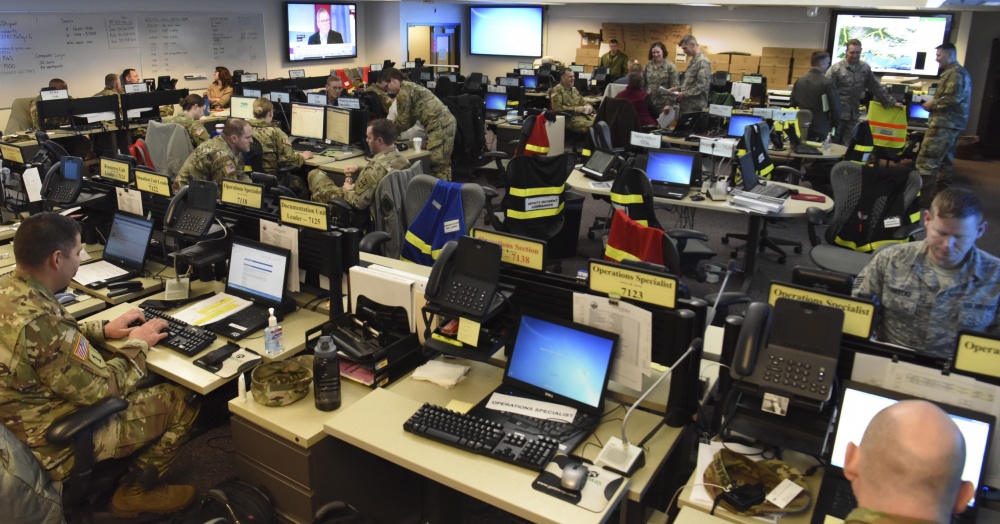 “We have done some extensive work supporting public utilities districts in Washington,” Pries said. “The knowledge of our National Guard cyber professionals is invaluable, and has already assisted in strengthening security of the networks our citizens rely on every day.”

Another part of Arctic Eagle 2018’s cyber exercise was to identify a phishing attack on the city of Valdez. The Port of Valdez handles more than 1.5 million barrels of crude oil, along with other goods annually.

“We chose the port because we wanted to know how much it could possibly disrupt the operations, and what actions would take place, mainly communicating with other organizations about the phishing attack,” Moreland said.

Starting to have those kinds of conversations, according to Moreland, was a priority during the exercise.

“One of the goals of Arctic Eagle 2018 was to have scenarios that included security and protection of critical infrastructure; we feel like including cyber in the exercise meets the state’s intent,” he said.