At U.S. Cyber Command’s first-ever industry day, leaders from across the command briefed nearly 400 members of private industry about the command’s acquisition priorities at the National Geospatial-Intelligence Agency. 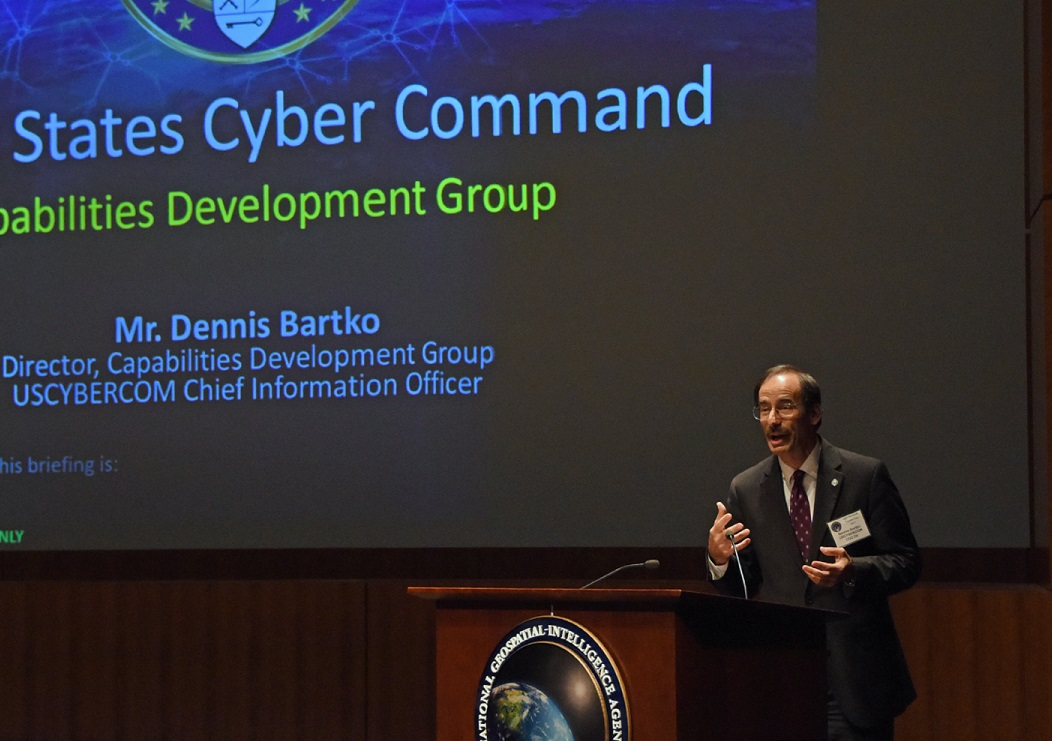 ‘We Have to be Great’

“We have to be lean and agile as we execute our programs,” Rogers said in a video. “We cannot keep the United States safe into the future, especially in the rapidly changing domain of cyber, using a firehose approach. We have to have the precision of a microsurgeon. We can’t just be good, we have to be great. And, we can’t be great without partnerships.”

He also challenged the attendees to be creative in the solutions they bring to the table to help defend the nation and stressed that communication would be the key to success.

Other leaders echoed Rogers’ comments, including Dennis Bartko, the director of the command’s Capabilities Development Group.

“Our objective [for industry day] is pretty simple: to share information with you so we can work together as a team to enable the Cyber Mission Force. Nothing works in this domain without partnership,” Bartko said. “I believe that communication is the lifeblood of teamwork, and like Admiral Rogers said, communication needs to go both ways.”

Bartko also laid out his expectation and vision for how the command would use its new limited acquisition authority granted by Congress, which allows Cybercom to execute contract actions up to $75 million per fiscal year until Sept. 30, 2021, for rapid tool development, IT services and other capabilities related to cyber operations.

Cybercom will continue to rely on the military departments and federal agencies to write and execute contracts for the remainder of its capabilities development budget, Bartko said.

“We’re probably not going toward long-term big projects,” he noted, which is what people tend to think of defense contracting. “We’re likely going to leverage a DEVOPS model instead.”

DEVOPS, or development operations, refers to a model of development popular in the software and technology world that aims to limit the time between concept and implementation. This allows for increased adaptation and in-stride modifications.

“The CMF reaching [full operational capability] will drive resources because our operational tempo will increase,” he said. “We will need to leverage automation, innovation and a rapid development approach. Requirements are dynamic so solutions need to be responsive.”

Tony Davis, previously the acting Command Acquisition Executive at Cybercom, helped the command create the processes and programs needed to execute its new acquisition authority. While Davis has returned to U.S. Special Operations Command in Tampa, Florida, he stated he sees a bright future for the new acquisitions office.

Davis said the cyber acquisitions model requires agility and flexibility, particularly in prototyping, where products will be delivered “in weeks or months, not months or years.” The challenge then, he said, is how to get the capability into the hands of the warfighter to test it.

Davis stressed the need for competition in this space and a commitment to working with small businesses.

Cybercom currently has small business and competition advocate functions to ensure the integrity of the competitive process. It also plans to use part of its acquisition authority to create an unclassified collaboration venue where businesses and academia can help tackle tough problems without needing to jump over clearance hurdles, which can often be a barrier for small businesses and researchers.

Command officials said that ultimately partnership, outreach and teamwork will make Cybercom more agile and capable in its ability to defend the nation.