The 366th FW sent approximately 240 operations and maintenance airmen and 14 F-15E Strike Eagle aircraft from the 389th Fighter Squadron to train in real-world simulated scenarios for this two-week long exercise.

An Air Force pilot from Mountain Home AFB, Idaho, performs a pre-flight check on an F-15E

One of the mainstays of Mountain Home, the F-15E Strike Eagle, is a distinctive aircraft with dual seats. The aircraft’s design enables the pilot and the weapons systems officer to work collectively to achieve peak proficiency. The all-weather fighter houses avionics and electronics systems that give this aircraft the ability to fight at low altitude any time of the day through various types of weather.

“Checkered Flag is a unique opportunity for us to integrate with many different aircraft, specifically fourth- and fifth-generation aircraft integration,” said Air Force Lt. Col. David Och, 389th Fighter Squadron commander. “We do not get to do this type of training at Mountain Home very often.

“The ability to come here to integrate and mission plan alongside the newest aircraft in our inventory is a unique experience only available at exercises like Red Flag and here at Checkered Flag,” Och added.

According to its factsheet, the 389th FS Thunderbolts are responsible for sustaining combat readiness to conduct a variety of short-notice contingency operations worldwide. 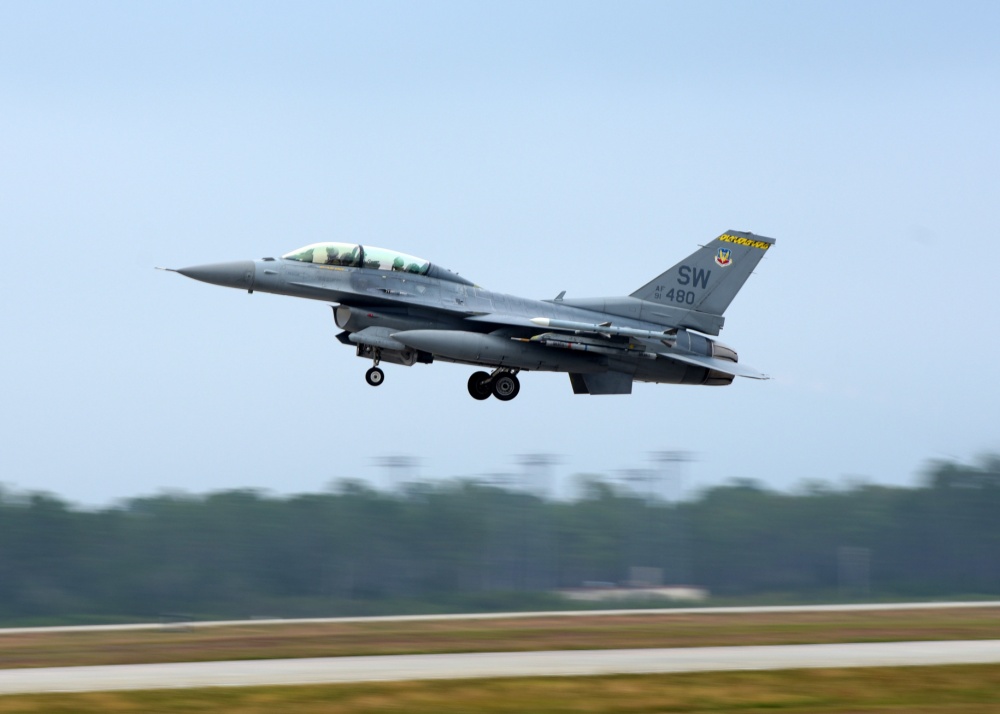 “Exercises like this allow us to practice, make improvements and efficiencies in logistics and manpower toward the deployment aspect of an exercise,” Och said. “In this case, we are only moving assets from Mountain Home to Tyndall. However, if we were to be heading into a real-world deployment, much of the steps and processes would be the same.

“Our wing must be prepared to deploy combat-ready assets at a moment’s notice so participating in this exercise is extremely beneficial,” he added.

Checkered Flag focuses on the seamless integration of fourth- and fifth-generation aircraft while enabling the participating active duty units to train alongside their Air Force Reserve and Air National Guard colleagues. Checkered Flag and the Weapons Systems Evaluation Program run simultaneously, WESP focuses on the air-to-air training and live fire weapons testing for the participating units.

“This specific exercise allows our Thunderbolts to get back into an air-to-air combat mindset,” Och said. “After returning from a record-setting deployment that was mainly an air-to-ground focus, we will now be able to train and refocus on being ready for any contingencies that may occur at a moment’s notice.”

As the exercises ramp up into full swing, the 389th and its partners will participate in rigorous, high-paced training based on real-world scenarios.