Prabhakar spoke last week at the 4th annual Defense One Summit during a conversation with moderator Christopher Mims, technology columnist for the Wall Street Journal.

“The questions we ask ourselves at DARPA about the space domain … is what would it take to make the space domain robust for everything that we need militarily and for intelligence, and what would it take to make space a real-time operational domain, which it’s not at all today,” the director said, noting that many other nation-states now are active in orbit and space is a domain where conflict is becoming a real possibility.

Through a national security lens, she added, nothing needed from an intelligence or military perspective can be done effectively without access to space. Something as simple as navigation completely depends on GPS in nearly every part of the world and in every operating regime.

For DARPA space programs, a whole portfolio is needed, Prabhakar said, noting that there is no one magic solution to challenges in the space domain.

“One dimension of it is launch, and some of the things that we’re all seeing with commercial launch today is a great step in the right direction,” she said.

“If you think of it in terms of time to launch — how long does it take to put a new capability on orbit — we’ve lived through a long time where the answer to that question was years. It’s going to take billions of dollars and many years from the time we started to really put the asset into function,” the director added.

Commercial capabilities may accelerate that to months, she said, but getting ready for launch — having a certified process, all the safety and assurance, the facilities and the operational capability to launch — is a long, slow process. 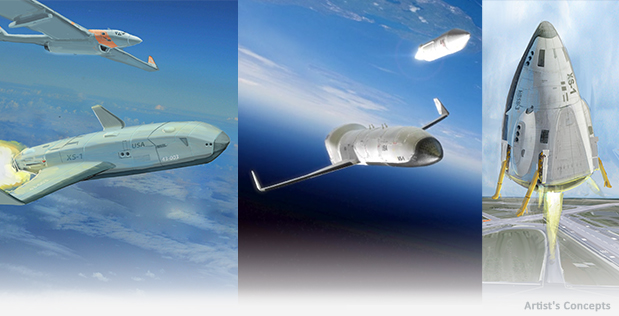 In an era of declining budgets and adversaries’ evolving capabilities, quick, affordable and routine access to space is increasingly critical for national and economic security. Today’s satellite launch systems require scheduling years in advance for a limited inventory of available slots and launches often cost hundreds of millions of dollars each. The Defense Advanced Research Projects Agency created its Experimental Spaceplane, or XS-1, program to help overcome these challenges and reduce the time to get capabilities to space.

“Because of the demands on launch, from the day you know you have to put an asset on orbit to the time you can plan on a launch today is still unacceptably long,” Prabhakar said.

Commercial capabilities will help, she added, “but if in a time of war we imagine if we could go to space not in a month or next week but tomorrow, think about how that would completely change the calculus for an adversary that’s thinking about [using an antisatellite] weapon to take out one of our satellites.”

With that ambition in mind, DARPA is now starting Phase 2 of its Experimental Spaceplane, or XS-1.

“It’s a reusable first stage that’s designed to be able to put 3,000 or 5,000 pounds into low earth orbit … at a very low cost point — a few million dollars — but very significantly the objective on the DARPA program is by the end of the program to fly that spacecraft 10 times in 10 days,” Prabhakar said, “something that’s inconceivable with any of the spacecraft we have today.”

A second piece of the puzzle is what can be done in orbit, she added, referring to low earth orbit, or LEO, an orbit around Earth whose altitude is between 99 and 1,200 miles.

“We’re doing some amazing work with geo[synchronous]-robotics and rethinking [geostationary Earth orbit]-architectures once you have an asset that would allow you to extend the life or do inspection or simple repairs at GEO, which is something you can’t do today.

GEO is a stable region of space 22,370 miles from Earth. Because the orbital period matches almost exactly the time it takes for Earth to rotate on its axis in a day, objects in GEO seem to be hovering directly over one place on the planet, Pamela Melroy, deputy director of DARPA’s Tactical Technology Office and a former astronaut, said last year during a DARPA forum.

And because GEO is a stable environment for machines — but hostile for people because of high radiation levels — DARPA thinks the key technology there is space robotics, Melroy said.

The program’s goal is to develop and demonstrate technologies that make it possible to inspect and robotically service cooperative space systems in GEO and to validate new satellite assembly architectures.

Phoenix has achieved promising Phase 1 results and has awarded eight companies prime contracts for Phase 2 efforts. Phase 1 showed the feasibility of the agency’s robotic tools and assembly techniques, and validated the concept that new satellites could be built on orbit by physically aggregating “satlets” in space, according to DARPA.

DARPA now is working to validate the technical concept of satlets in LEO, DARPA says.

In her remarks at the Defense One Summit, Prabhakar discussed what she called “big bets” that DARPA places in breakthrough technologies.

“I think space, a completely new architecture for space that makes it robust, resilient and real-time, that would be a revolution,” she said, “and I think it’s something that could happen with some of the bets that we’re placing.”