The erosion of American military capabilities is real and must be halted, the chairman of the Joint Chiefs of Staff, Marine Corps Gen. Joe Dunford, told the Senate Armed Services Committee.

The erosion of American military capabilities is real and must be halted, the chairman of the Joint Chiefs of Staff told the Senate Armed Services Committee here today. 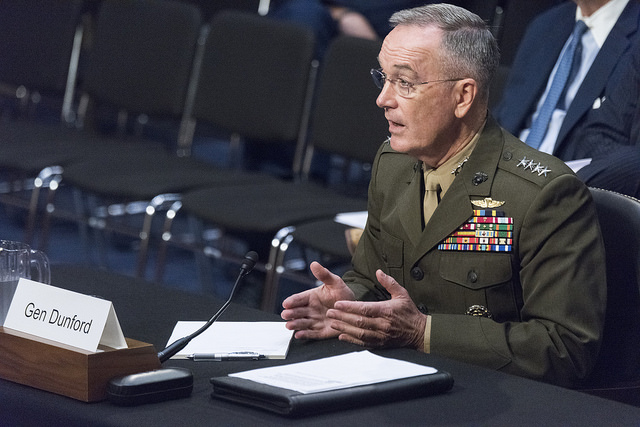 Dunford attended his reconfirmation hearing in the U.S. Senate Hart Building. He has served as CJCS since Oct. 1, 2015, and has been nominated for a second two-year term.

The chairman told the senators that America’s military benchmarks its forces’ capabilities against the military capabilities of Russia and China.

Russia and China are spending vast amounts to build up their militaries and they are aiming capabilities at American gaps, Dunford said. The biggest advantage the United States maintains, he said, is the ability to deploy troops and capabilities anywhere in the world and then maintain them. Russia and China, he added, are looking to minimize that advantage and split the United States from its European and Pacific allies.

In the early part of this century, the United States “had a significant competitive advantage in our ability to project power when and where needed to advance our national interest,” he said.

“I can't say that today,” the chairman said.

Capabilities are also eroded by lack of money and lack of time for training, he said.

“If you took a pilot specifically, you know, in the past, pilots might have had 30 hours a month to fly. Now they may be down as low as 15 hours a month,” Dunford said. “On a day-to-day basis, you may not be able to see the different between pilot A and pilot B. But, if there is an in-flight emergency, I can guarantee you that the pilot that has 30 hours will immediately feel much more comfortable and confident in their ability to deal an anomalous situation [and] be able to control their physiological response. And you and I may never find out about that incident.”

The pilot with only 15 hours a month may not end up so safe, the chairman said.

Dunford: U.S. Faces Volatile, Complex Security Situations
The United States faces a volatile, unpredictable world and must keep up its guard, Marine Corps Gen. Joe Dunford, the chairman of the Joint Chiefs of Staff, said during a reconfirmation hearing before the Senate Armed Services Committee.