Wreckage of the World War II aircraft carrier USS Hornet rests on the floor of the South Pacific Ocean around the Solomon Islands, 5,400 meters (nearly 17,500 feet) below the surface as discovered by the crew of Paul G. Allen’s Research Vessel (R/V) Petrel. 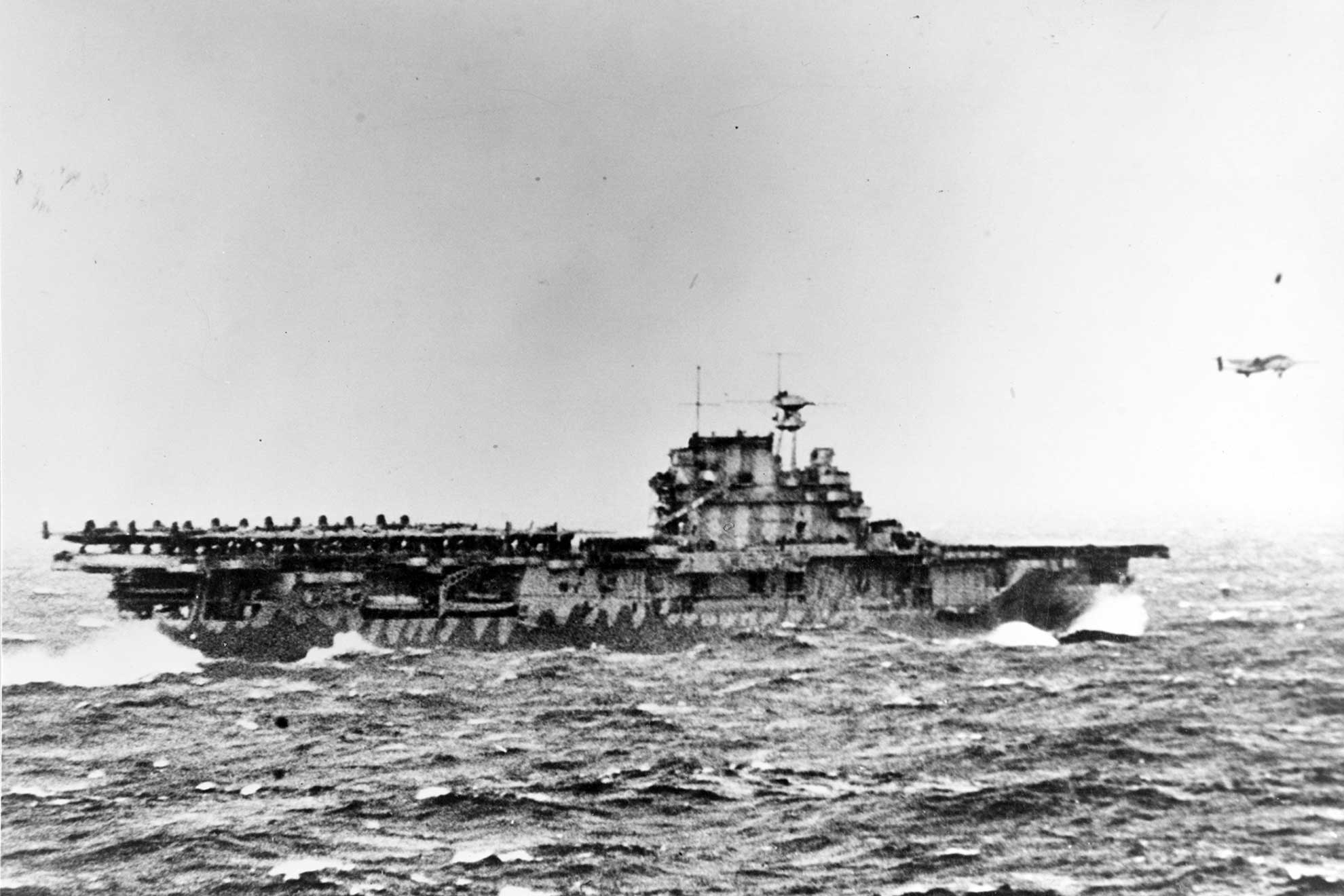 Hornet was best known for its part in the fateful Doolittle Raid that was launched in April of 1942, which was the first airborne attack of Japanese homeland targets including Tokyo. Led by U.S. Army Lt. Col. James Doolittle, all of the 16 B-25 planes that were launched from Hornet were unable to land at their designated airstrip in China, but the raid provided a boost to American morale, and put Japan on alert about our covert air capabilities.

In June, Hornet was one of three American carriers that surprised and sunk four Japanese carriers at Midway, turning the tide of war in the Pacific.

The ship was sunk during the exceptionally vicious Battle of Santa Cruz Island that started Oct. 25, 1942. Hornet proved an especially determined ship over the next 24 hours. Enduring a relentless, coordinated attack by Japanese dive-bombers and torpedo planes, her crew was ultimately forced to abandon the ship due to damage and resulting fires. She then defied American efforts to scuttle her with 16 torpedoes and 369 rounds of 5-inch shells. When Japanese forces approached shortly thereafter and fired four torpedoes from two Japanese destroyers late in the evening of Oct. 26, Hornet finally succumbed and slipped beneath the surface. She lost 111 Sailors from her crew of nearly 2,200.

"With the loss of Hornet and serious damage to Enterprise, the Battle of Santa Cruz was a Japanese victory, but at an extremely high cost,” said retired Rear Admiral Samuel Cox, director of Naval History and Heritage Command. “About half the Japanese aircraft engaged were shot down by greatly improved U.S. Navy anti-aircraft defenses. As a result, the Japanese carriers did not engage again in battle for almost another two years."

"Naval aviation came of age in World War II and American Sailors today continue to look to and draw inspiration from the fighting spirit of ships and crews like USS Hornet (CV 8), Vice Chief of Naval Operations Adm. Bill Moran added. "Although her service was short-lived, it was meteoric.

"In the dark days following the Japanese surprise attack on Pearl Harbor, she and the Doolittle Raiders were the first Americans to punch back at Japan, giving hope to the nation and the world when things looked bleakest," Moran said. "She was there when the American Navy turned the tide in the Pacific at the Battle of Midway, and she was there when America started the long drive to Tokyo in the Solomon Islands. Mortally wounded during the vicious campaign at Guadalcanal and abandoned after all attempts to save her failed, she was finally sent below by the Japanese destroyers Akigumo and Makigumo.

"As America's Navy once again takes to the sea in an uncertain world, Hornet's discovery offers the American Sailor a timeless reminder of what courage, grit and commitment truly look like," Moran continued. "We'd be wise as a nation to take a long, hard look. I'd also like to thank the crew of Petrel for their dedication in finding and honoring her sacrifice."

The discovery of Hornet was made during R/V Petrel’s first mission of 2019 after relocating from the Philippine Sea to the Solomon Islands to spend winter months in this arena. Operating out of Guadalcanal, the area is rich in history and prominence in terms of naval engagements.

“We had Hornet on our list of WWII warships that we wanted to locate because of its place in history as an aircraft carrier that saw many pivotal moments in naval battles,” said Robert Kraft, director of subsea operations for Vulcan. “Paul Allen was particularly interested in historically significant and capital ships, so this mission and discovery honor his legacy.”

The 10-person expedition team on the 250-foot R/V Petrel was able to locate Hornet’s position by piecing together data from national and naval archives that included official deck logs and action reports from other ships engaged in the battle. Positions and sightings from nine other U.S. warships in the area were plotted on a chart to generate the starting point for the search grid.

In the case of Hornet, she was discovered on the first dive mission of Petrel’s autonomous underwater vehicle, and confirmed by video footage from the remotely operated vehicle, both pieces of equipment rated to dive down to 6,000 meters.