While challenges face the Army, the service remains resolute in its mission to fight and win the nation’s wars, says Army Vice Chief of Staff Gen. James C. McConville.

The general appeared a hearing of the Senate Armed Services Committee’s subcommittee on readiness and management support with the vice chief of naval operations, the Air Force vice chief of staff and the assistant commandant of the Marine Corps. 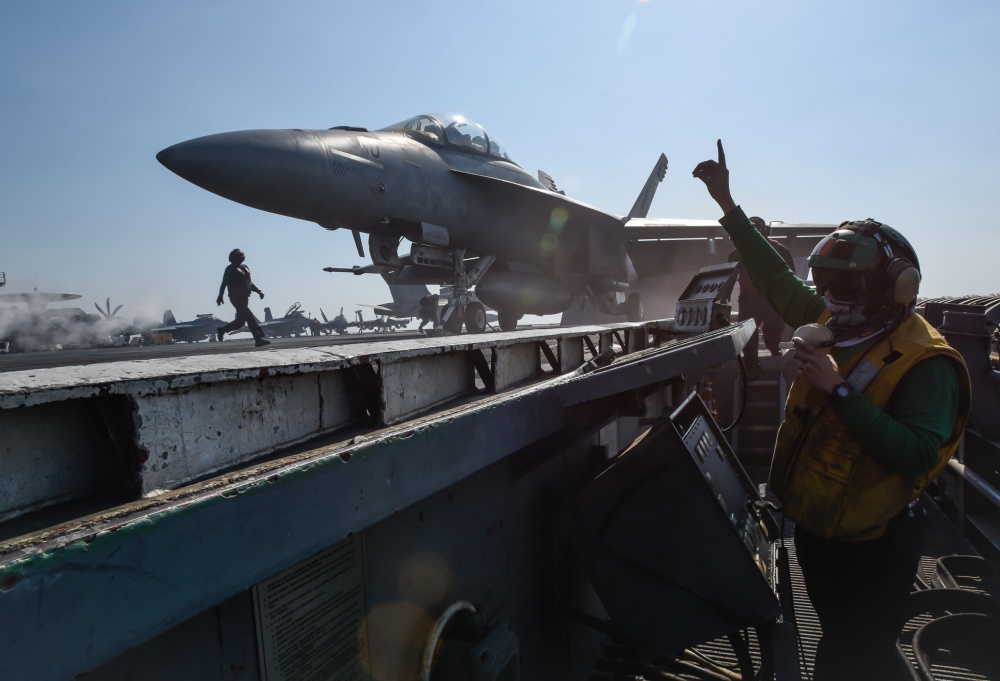 Navy Petty Officer 2nd Class Mariani Rivera signals that an aircraft is ready for launch on the flight deck of the aircraft carrier USS Theodore Roosevelt in the Persian Gulf, Feb. 4, 2018. Added military funding provided by Congress will enable the Navy and the other services to improve their lethality and effectiveness. Navy photo by Petty Officer 3rd Class Alex Corona.

“The establishment of cross-functional teams focus the Army’s six modernization priorities, and the introduction of the Army’s Futures Command will increase unity of effort, agility and accountability while building a more agile and lethal force,” McConville added.

The general asked for continued help from Congress for timely, predictable and sustained funding to ensure the Army maintains its competitive edge and retains the best-trained, best-equipped and best-fighting force in the world.

“The Congress and the people of our great nation expect a Marine Corps to be forward-deployed and forward-postured, ready and capable of rapid action to win our nation’s battles,” Marine Corps Gen. Glenn M. Walters, the assistant Marine Corps commandant, told the senators. Marine Corps readiness is essential to fulfilling this responsibility, he added.

“Our defense strategy now defines readiness as our ability to compete, deter and win against the rising peer threats we face,” Walters said, adding that the Corps must modernize to achieve that definition of readiness.

“The support of Congress in passing the fiscal year 2017 request for additional appropriations provided a welcomed step toward correcting our readiness challenges.,” he said.

“Today our strategic competitors China and Russia are moving at a speed and scale unseen in recent history,” Wilson told panel members. “We must counter that with sustained urgent action.”

With help from Congress, the Air Force can accelerate building a more lethal force ready to compete, deter and win “any fight, anywhere,” Wilson said.

“Aided by your funding in [fiscal year 2017], we’ve arrested the readiness decline,” he said, noting that 3,300 airmen a year over the next five years will be added to the Air Force.

Navy to Invest in Increased Capability and Readiness

“Last year, members of Congress invested $1.7 billion in Navy readiness,” the admiral said. “We allocated every single penny of that critical investment to arrest the erosion we were seeing [in] FY ’17 and previous years, and it put us on a path in FY ’18 to restore our most pressing readiness needs.”

Instead of shutting down flight operations for several fleet squadrons, the Navy was able to continue operating and training its pilots and air crews, he said. The Navy also was able to begin addressing understocked spare parts and it’s able to build a more effective workforce at aviation depots, the admiral added.

“That extra money also helped us recover a number of the deferred surface ship maintenance and modernization periods that allowed us to restock our munitions,” Moran said. “We will be able to sustain the recovery you helped us jumpstart last year and grow and improve our lethality as a Navy.”

Together, these changes will expand the margin of victory in any future fight, Moran told panel members.

“And it will move us closer to the Navy the nation needs,” he said.