The United States “is a Pacific nation and a Pacific power. It always has been and it always will be” said Navy Adm. Harry B. Harris Jr., commander of U.S. Pacific Command. The Indo-Asia-Pacific region remains “the most consequential area for America’s future”.

The Indo-Asia-Pacific region remains the most consequential area for America’s future, the commander of U.S. Pacific Command said here today. 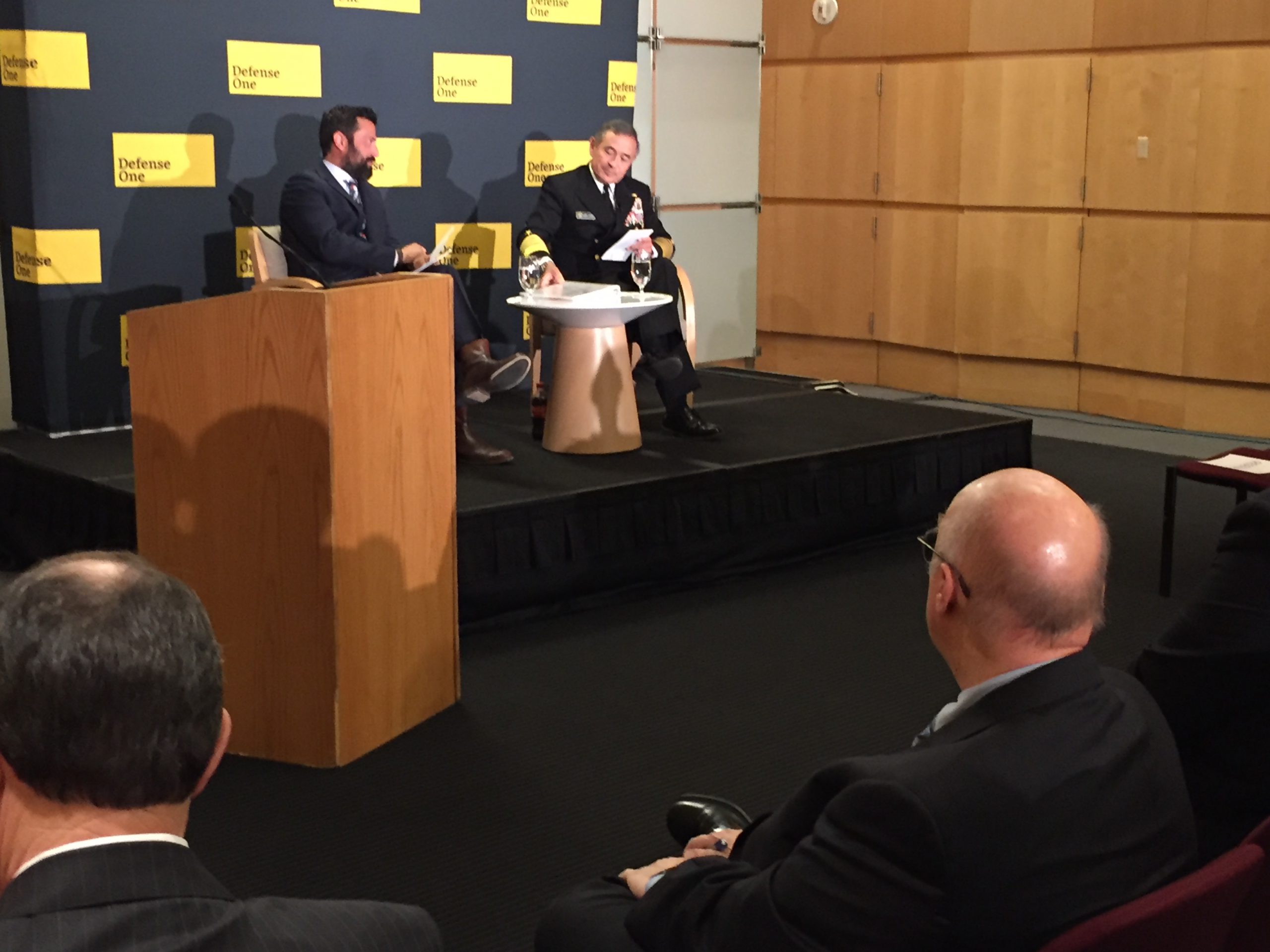 Navy Adm. Harry B. Harris Jr, at the Defense One Summit Kickoff

Defense One Executive Editor Kevin Baron speaks with .  in Washington, Nov. 15, 2016. Harris, the commander of U.S. Pacific Command, said his region is “the most consequential” to America. DoD photo by Jim Garamone.

Navy Adm. Harry B. Harris Jr. said at the Defense One Summit kickoff that he has told all in the region that the United States “is a Pacific nation and a Pacific power. It always has been and it always will be.”

The United States remains the security partner of choice in the region and America’s presence has guaranteed peace and prosperity for the nations of the region, the admiral said. “No one should doubt our resolve to defend the territory of the United States, our people or our interests,” he said.

Harris said he’s also concerned about the potential for the spread of Islamic State of Iraq and the Levant or other violent extremists to the Indo-Asia-Pacific region.

Presence matters, the admiral said. The Arleigh Burke-class destroyer USS Sampson, he noted, will join the disaster relief mission to aid New Zealand following the devastating earthquake in the country. Other examples of U.S. presence in the Indo-Asia-Pacific region are the freedom of navigation exercises in the South China Sea and U.S. Navy port visits to Vietnam and Australia.

The same is true of U.S. military-to-military relations with individual countries in the Indo-Asia-Pacific region, he said, including South Korea, India, Japan, Thailand, Malaysia, Indonesia, Singapore and China.

Harris said China participates in exercises with U.S. ships. The Chinese, he said, sent forces to participate in the most-recent U.S.-led RimPac exercise. Such exercises help set the baselines for how the two navies cooperate at sea and help lessen the chances of a miscalculation leading to serious incidents, Harris said.

But the “hub and spoke” model of relations — where the U.S. has relationships with individual countries, but the countries don’t necessarily have relations with neighbors — needs to change, Harris said. “We should have partnerships with a purpose, and they should be multilateral,” he said.

The United States has five treaty allies in the region — South Korea, Japan, Thailand, Australia and New Zealand — and by nature those relationships will be bilateral, Harris said.

“But beyond that, there is ample space for multilaterals,” the admiral added.

One example is a trilateral alliance for the defense of Northeast Asia, he said. The United States, he added, already has treaties with Japan and South Korea separately, but the three countries should work together more closely to defend such a vital area.

There is the need for a multilateral alliance to combat the threat of violent extremism in Southeast and South Asia, Harris said. “There is a natural grouping of countries there that we are working on to go after ISIL, and that is the United States, Malaysia, Indonesia, the Philippines … and Bangladesh,” he said. “That’s a natural grouping and we ought to be working on that, exploring that, strengthening that and we are.”

Then there is what the admiral calls the regional democracies multilateral alliance — Japan, the United States, Australia and India. “That is a very interesting grouping there, and we ought to be talking about that,” he said.

The Association of Southeast Asian Nations, or ASEAN, is not a military alliance and is not an Asian version of NATO, but it can be a springboard for better military cooperation among the nations of the region, Harris said. One example, the admiral said, was the alliance of Singapore, Malaysia and the Philippines that took on the problem of piracy in the region.

Singapore, Indonesia and Malaysia took on pirates in the Strait of Malacca and virtually cleaned up that area, Harris said.

This is the kind of multilateral cooperation that the presence and example of the United States make possible, Harris said. He said he would like to see more of it.