A defining feature of pro-Kremlin disinformation is its repetitiveness. For all the outrageous claims they make, pro-Kremlin outlets often sound like a broken record sticking to just a handful of basic messages for domestic and international audiences. This is not by accident or oversight, it is by design: repetition makes lies sound more believable. Pro-Kremlin disinformation outlets achieve this by sticking to a set of recurring narratives that work as templates for particular stories.

A narrative is an overall message communicated through texts, images, metaphors, and other means. Narratives help relay a message by creating suspense and making information attractive. EUvsDisinfo has identified a set of five dominant narratives used by Russian and pro-Kremlin disinformation outlets. We have seen them deployed on many occasions: for example, to interfere in elections, to spread falsehoods about the COVID-19 pandemic, and to justify the unprovoked war in Ukraine.

This summer, we are bringing you an updated overview of these narratives. Here is the fifth and final one, the narrative of the ‘Hahaganda’. See also the previously published narratives: ‘The Elites vs the People’, ‘Threatened Values’, ‘Lost Sovereignty’, and ‘Imminent Collapse.’

A final resort in disinformation, typically when confronted with compelling evidence or unassailable arguments, is to make a joke about the subject, or to ridicule the topic at hand.

The Skripal poisoning case is an excellent example of this strategy. Russian and pro-Kremlin disinformation outlets have continued their attempts to drown out the assassination attempt with sarcasm to turn the entire tragedy into one big joke. A similar approach has been employed in the case of the attempted assassination of Alexei Navalny, where pro-Kremlin media has competed on delivering “fun” stories on how to better kill the Russian dissident.

The methods of ‘hahaganda’ also involve the use of various derogatory words to belittle the concept of democracy, democratic procedures, and candidates.

Kremlin aide Vladislav Surkov describes the concept of democracy as “a battle of bastards” and instead recommends the ‘enlightened rule’ of Vladimir Putin as an alternative for Europe. Former Ukrainian President Petro Poroshenko was almost constantly ridiculed in pro-Kremlin media, as is Ukraine’s entire election process. According to Russian state media, an election with several candidates and no obvious outcome is considered a circus. 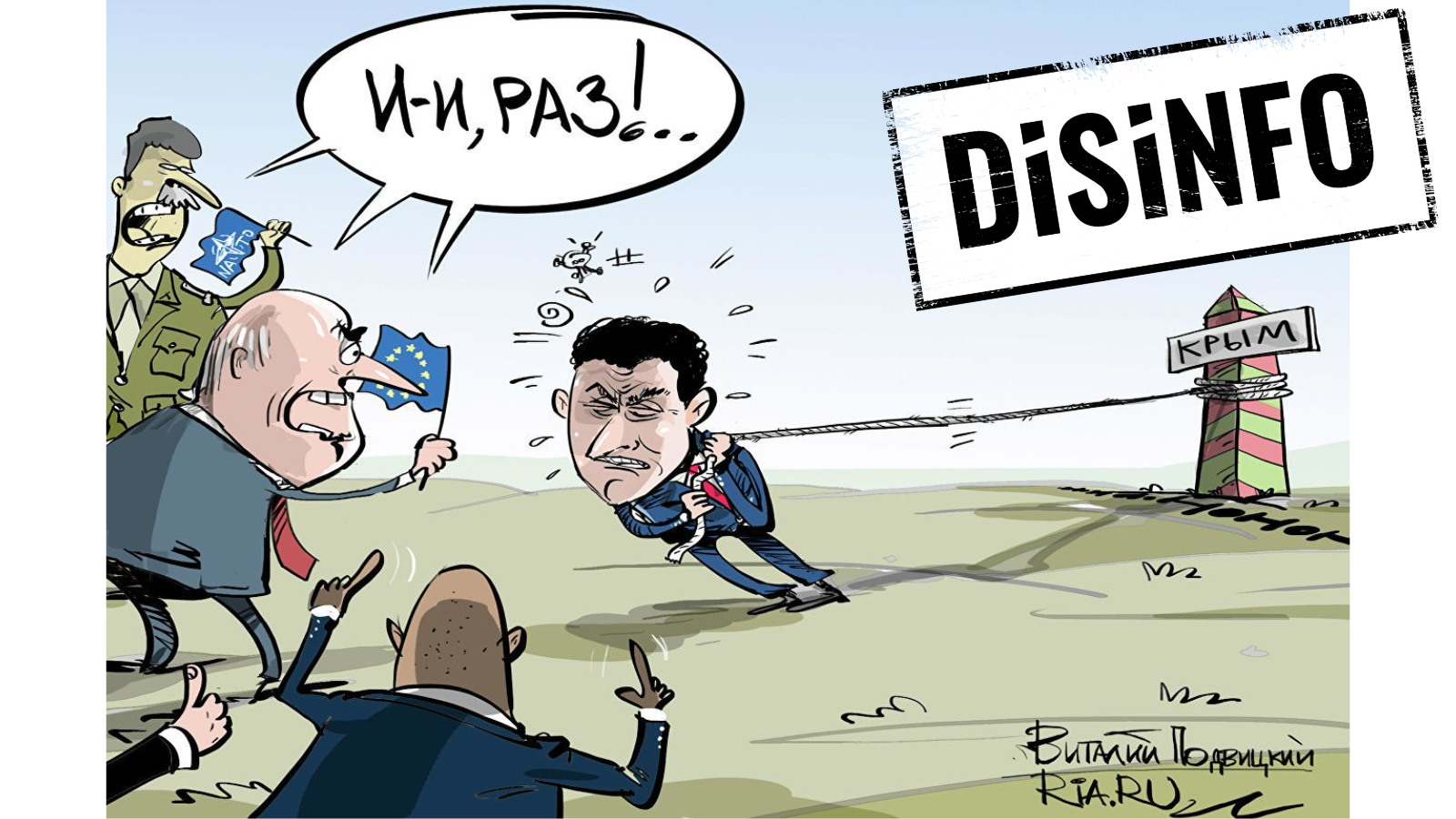 Ukraine’s sitting president Volodymyr Zelensky has also received more than his fair share of ridicule and humiliation in pro-Kremlin disinformation outlets during his time at the office. Among other ridiculous allegations, he has been claimed to get military advice from his 9-year old son, dance to the tune of the US, and allegedly also to that of Turkey. No pro-Kremlin orchestrated humiliation would be full without the mandatory Nazi and Soros affiliations.

This weaponisation of jokes and public ridicule is so favoured by the Kremlin, that the State News Agency RIA Novosti employed two pranksters, tasked with setting up fake telephone conversations with politicians, activists and decision-makers. Posing as representatives of the Alexei Navalny team, environmental activist Greta Thunberg, and most recently as Ukraine’s prime minister, the Kremlin affiliated jesters attempt to con the interlocutor into saying something politically destructive.

Of course, satire, humour, and parody are all integral components of public discourse. The right to poke fun at politicians or make jokes about bureaucrats is important to the vitality of any democracy.

It is ironic, then, that Russian and pro-Kremlin disinformation outlets often seek to disguise their anti-Western lies and deception behind a veil of satire, claiming it is within their rights of free speech. However, at the same time, they aggressively refuse to tolerate any satire that is critical of the Kremlin, or undermines its political agenda. An example of this hypocrisy is Russia’s ban on the 2018 British comedy The Death of Stalin.

In their 2017 report, NATO’s StratCom Centre of Excellence explained how Russian and pro-Kremlin disinformation outlets use humour to discredit Western political leaders.

One of its authors, the Latvian scholar Solvita Denisa-Liepniece, has suggested the term ‘hahaganda’ for this particular brand of disinformation, which is based on ridiculing institutions and politicians.

The grotesque feature of hahaganda is that it is very hard to defend yourself against it. There is no point in protesting. The joke is not supposed to convey factual information. It’s a joke! Don’t you guys have humour? Do you have to be so politically correct all the time?

The goal of hahaganda is not to convince audiences of the truth of a particular joke, but rather to undermine the credibility and trustworthiness of a given target, such as an individual or an institution, via constant ridicule and humiliation. At times, hahaganda takes a truly morbid turn, when the pro-Kremlin disinformation machinery decides to turn an attempted political assassination into a laughing stock.