Pro-Kremlin disinformation channels are using the assassination of Darya Dugina to raise the stakes of the invasion in the eyes of domestic audiences. The goal: to paint a picture where Russia is facing a war of annihilation, and the only way to survive is to destroy Ukraine.

This edition of Disinformation Review is published on day 183 of Russia’s ‘three-day-war’ against Ukraine. Russia has been waging a full-scale unjustified war against a peaceful neighbour for six months now, shelling Ukrainian cities, including hospitals and schools, while killing, torturing, and raping civilians. According to Ukrainian estimates, over 5,000 civilians have been killed, among them 361 children.

None of that matters to Russian propagandists though, whose manipulative and hateful rhetoric has enabled and tried to obfuscate many of over 28,000 reported war crimes committed by Russian armed forces in Ukraine. At the six-months mark of the full-scale Russian invasion which falls on Ukraine’s Independence day, pro-Kremlin pundits have found a new rallying cry for aggression against Ukraine – the assassination of Darya Dugina, pro-Kremlin pundit and daughter of Russian philosopher and ultranationalist Alexander Dugin.

The assassination of Darya Dugina with a car bomb in Moscow is as gruesome as it is murky. The Russian security service FSB announced that the ‘crime was solved’, in record time no less. It accused Ukraine’s secret services of organising the killing and a mother with a 12-year-old in tow of carrying it out. Alleged evidence, presented on a continuous rotation on Russian state-controlled TV, is dubious to say the least, but that has not slowed down the Kremlin’s propagandists.

Even before the FSB’s ‘revelations’, pro-Kremlin pundits blamed Ukraine, claiming simultaneously that the act was a part of Zelenskyy’s plot to provoke a Russian air-strike on Kyiv (to make Moscow look bad) and a British attempt, carried out by Ukraine, to antagonise Russia and Turkey. In a familiar manner, British intelligence services were said to be behind the assassination. The purported evidence was a Daily Mail article whose tone displeased pro-Kremlin propagandists. Estonia was also accused without a shred of evidence.

This prompted the editor-in-chief of RT, EU-sanctioned Margarita Simonyan, to suggest that ‘professionals‘ might go and ‘admire the spires in the vicinity of Tallinn’, hinting at Russia’s involvement in the Salisbury poisoning that the Kremlin continues to deny. This, by the way, is not the first time the Kremlin’s propagandists show that they understand they are lying: spreading disinformation is not an accident or a mistake, it’s a choice.

Such accusations, hurled towards Ukraine, the UK and Estonia on Russian TV, are in line with a broad disinformation narrative that Western secret services are out to get Russia. They also correspond to the more specific objectives of pro-Kremlin disinformation:

Pro-Kremlin disinformation channels are using the assassination to raise the stakes of the invasion in the eyes of domestic audiences. The message is, no one is safe. The assassination is presented on Russian mass media with claims that Ukraine is about to blow up its own nuclear power plant in Zaporizhzhia (see more here). The goal is to paint a picture where Russia is facing a war of annihilation, and the only way to survive is to destroy Ukraine. 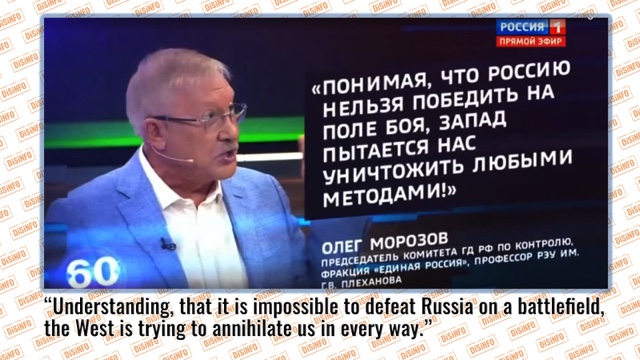 This week also marked the 83rd anniversary of the Molotov-Ribbentrop pact. As many times in the past, pro-Kremlin media took the opportunity to engage in historical revisionism by minimising and whitewashing the role of the Soviet Union in signing the pact with Nazi Germany and bringing about World War II with all of its consequences. See similar disinformation claims made in 2021, 2020, 2019.

In the meantime, the Russian Ministry of Foreign Affairs released a video on Twitter essentially arguing that many other countries, including the Baltic States, signed similar pacts with Nazi Germany. The Russian MFA is, however, mute about the pact’s secret protocols, which divided Europe into ‘spheres of influence’ – an idea that still resonates within Russia.

Talking about the Molotov-Ribbentrop pact, peddlers of pro-Kremlin disinformation like to say that the Soviet Union had ‘no choice‘, in the same way that Russia has ‘no choice‘ but to wage a brutal and bloody war now. Except that it does. But it keeps choosing violence.