Close to 80 terrorist attacks killing 520 people and injuring about 700 others have occurred throughout the world during this month alone.

Close to 80 terrorist attacks killing 520 people and injuring about 700 others have occurred throughout the world during this month alone. 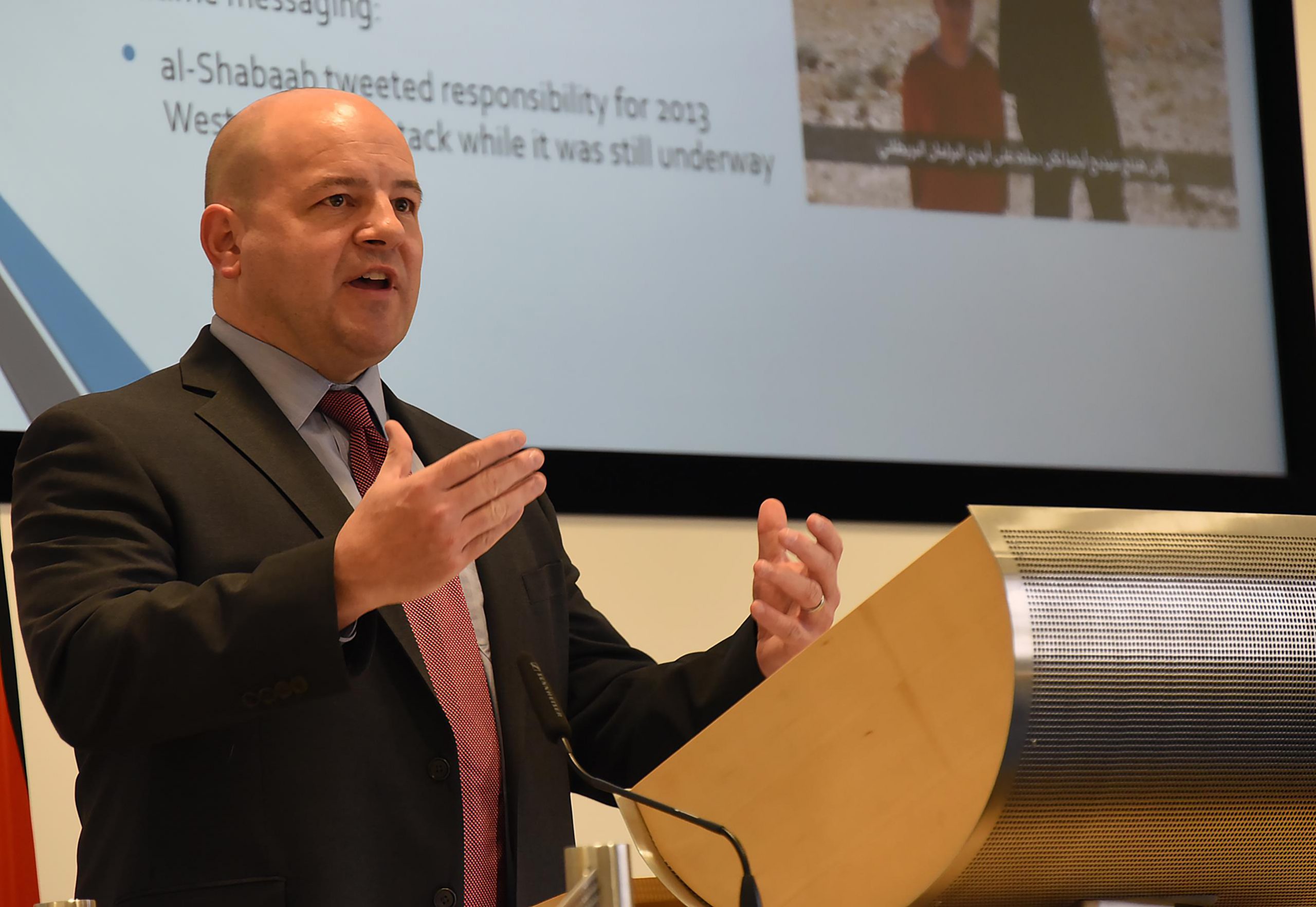 “There should be no doubt about the relevance of what you have learned during this past month,” Dayton told an international group of counterterrorism professionals from 42 countries who were graduating from the center’s Program on Terrorism and Security Studies course March 30.

In this past month, 72 counterterrorism military and civilian practitioners studied and discussed terrorism and what to do about it. They learned how to build strategies within their nations and between nations to defeat terror groups that use the strategy of terrorism to achieve political goals.

The importance of the course in addressing the terrorism threat is evident to Ambassador David M. Satterfield, who over the past eight years has made time in his busy schedule to talk to course participants.

“Combating terrorism is a long campaign. It is a global phenomenon; it is no longer a problem, which can be confined to a border or even a narrow set of borders,” said Satterfield, the director general of the Multinational Force and Observers, headquartered in Rome, when he kicked off the course March 2.

Satterfield’s presentation discussed how diplomacy is a critical component of any counterterrorism strategy, no matter the nature of the terrorism threat.

Referring to PTSS course, he added, “This is the premier counterterrorism course offered anywhere.”

Throughout the course, participants were given tools on how to build effective counterterrorism strategies in their countries. They heard from subject matter experts from 14 nations and faculty from additional five countries.

“The composition of persons in this course is an interesting mix,” said Jamaican Army Capt. Michelle Deval Brown, counterterrorism analyst with the Ministry of National Security from the Jamaican National Defense Force. “They have varied experiences, and during the course, I have been able to learn a lot from them as it relates to the perspectives on their countries. It has been very interesting for me to learn how the different countries go about doing their counterterrorism operations.”

Her fellow participant, Said Ali Salim Al-Shekaili, who works for the Royal Air Force of Oman as a cybersecurity investigator with the Defense Ministry, added that PTSS was exactly as he had expected.

The course’s leadership “actually made every effort to make it ideal for every counterterrorism professional in every way I can think of,” he said.

Course participants learned how to realistically assess the threat that terrorism represents in their countries and harness the powers and capabilities from throughout their governments and societies. They also studied how to build strategies to combat terrorism based on local knowledge and global interaction, and match the imagination of their adversaries.

“And most importantly,” Dayton said, “you learned how to build strategies that posture our governments and our societies for those inevitable times when we get it wrong.”

This global, whole-of-government approach to building counterterrorism strategies was reinforced by seven PTSS alumni who presented to this new group of professionals on what they are doing around the world.

Howcroft and his team consistently employ Marshall Center alumni speakers from a pool of more than 1,600 PTSS alumni — bridging the globe from the Americas to Asia to Africa to Europe — in a diverse network of military and civilian leaders. Howcroft said they are looking for experts in the alumni network, who are working security issues on a day-to-day basis that is important in fighting terrorism or other related emerging threats.

Supervisory Special Agent David Scott, with the FBI’s Washington field offices of the Joint Terrorism Task Force, attended PTSS in 2015. He explained to course participants how terrorists use the Internet.

“I think it’s important to come back to present at PTSS, to show your colleagues what it is that you can give to them on a practical basis that they can use in their jobs on a day-to-day basis,” Scott said.

“I believe it’s crucial to work together to defeat terrorism because terrorism knows no boundaries, so we have to learn to work together and work as an international group in order to defeat terrorism,” he continued. “It’s important to have the ability to trust everybody that you work within the counterterrorism field so to be able to know these people and be able to spend time with them [at the Marshall Center]. It completes a bond that we can use on day-to-day basis.”

Howcroft said this is the reason why PTSS is so important to the countries that send students to the Marshall Center.

“What I want participants to do is to take a fresh look at their countries’ existing strategies, by considering all the tools they learned in this course to determine if priorities and focused efforts are still valid,” Howcroft said. “There’s a great international cooperation for this transnational threat, so we have a whole range of tools now that we can successfully use to go after terrorists.”

Howcroft added that the course participants will return to their nations with a counterterrorism strategy specific to the threats facing their nations that they can implement immediately.

“We [PTSS participants] are supposed to do an assessment of a current threat in our country,” added Brown, who works daily in the collection of information that’s processed and disbursed to the operational teams. “In Jamaica, my threat is an attack on foreign visitors, so I’m working on that assessment now and I’m sure that when I get back home that assessment will be very useful if my country decides to use it.”

Howcroft said the course participants also have a new-found trust, avenues for collaborating and a greater understanding of the threat.

“PTSS introduced me to things that I didn’t know before about counterterrorism in every single way of it,” Al-Shekaili said.

It’s not easy fighting terrorism, Dayton told this new group of counterterrorism professionals. But, he provided some good news for the fight ahead.

“You are now part of a living network of combating terrorism experts and practitioners who are slowly and steadily working to eliminate a network of global terrorists who praise death and violence,” Dayton said.

“And,” you are making progress,” he added.