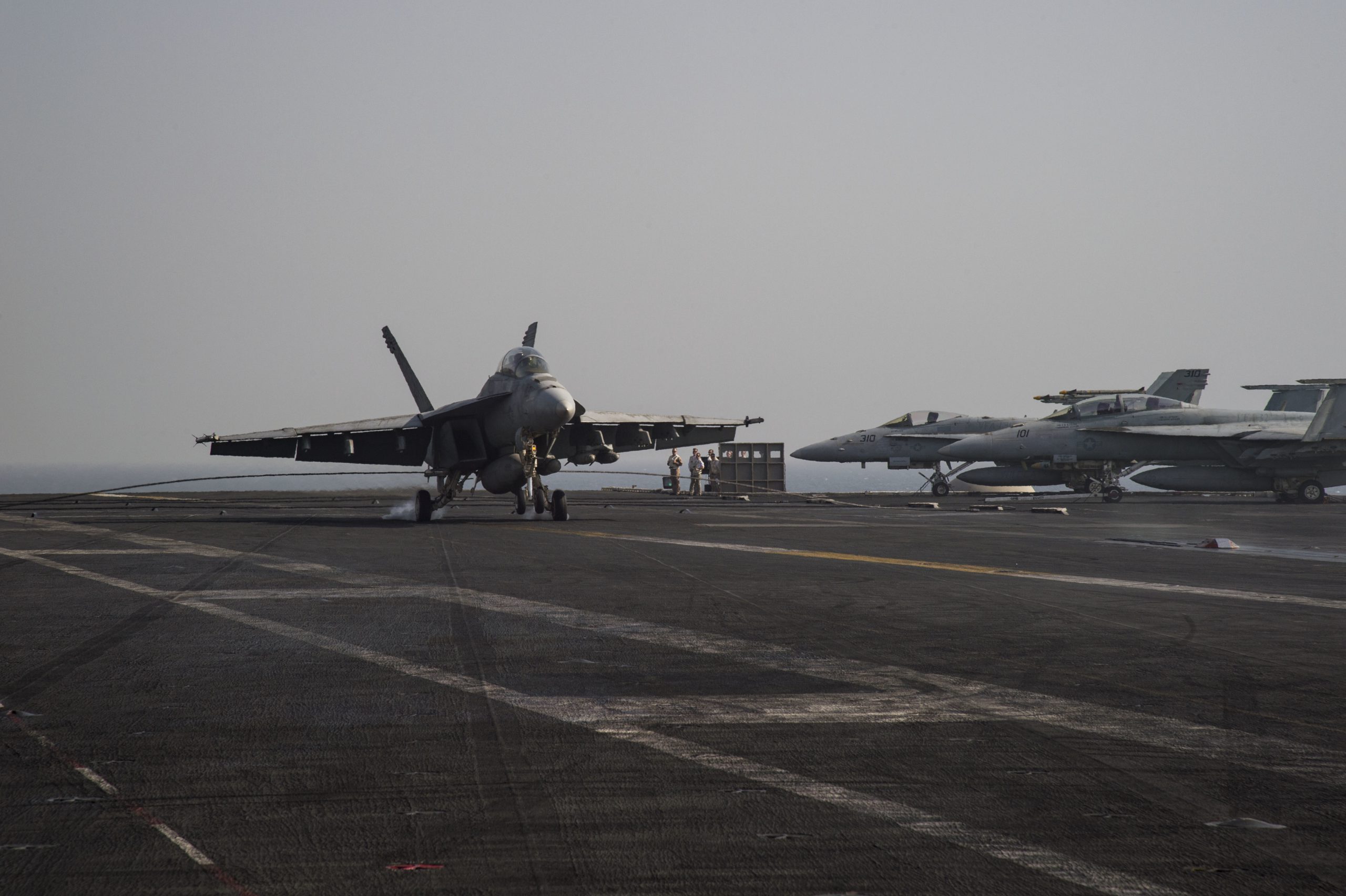 An F/A-18F Super Hornet lands on the flight deck of the USS Dwight D. Eisenhower

“The Iraqis have proven time and again they can and will conduct complex and decisive operations and that they have the will to defeat [ISIL],” Anderson said.

Plans are being finalized for Mosul’s liberation, while shaping operations, force positioning, logistics and ammunition and the relentless employment of U.S.-led coalition strikes set the stage for success in Mosul, he added.

“Following the inevitable liberation of Mosul, it will take an estimated 30,000 to 45,000 hold forces for such a large city, employing local police who will serve as the face of security for Iraq,” Anderson said.

We have stepped up our emphasis on police training and recruiting tribal forces, adding 5,000 local police and over 20,000 tribal fighters,” the general said. Those forces, he added, “will be the key to holding gains and protecting the newly liberated Iraqi citizens, and soon, over a million more to be freed from [ISIL] oppression in Mosul.”

When coalition training shifted from counterinsurgency to a combined arms maneuver approach, the Iraqis learned how to integrate infantry, armor, artillery, engineers, aviation and other combat multipliers to achieve an overwhelming advantage on the battlefield, he said.

“Each day, the government of Iraq is closer to accomplishing its goal of liberating Iraqis” from ISIL’s hold, Anderson said. “The coalition will continue to support the Iraqi government and Iraqi forces to execute their plan to liberate Mosul at the time of their choosing.”

Concurrent with the operations to liberate Mosul, Anderson said his team will continue to assist the Iraqis in developing necessary forces and training to ensure the ISF’s long-term security and success in its war on ISIL.

ISIL Fight Not Over After Mosul

“But the fall of Mosul does not mean that [ISIL] is defeated by any stretch of the imagination,” the general said. It means the organization’s defeat in Mosul will be one in its existing format, he said, adding that ISIL’s capacity to conduct conventional operations has been defeated, but not the terrorist group, itself.

Anderson said it’s expected ISIL will dissipate into urban terrain and into the population, and that the Iraqis are going to fight insurgency and counterterrorism operations “for a while.”

To date, the U.S.-led coalition has trained 45,000 Iraqi security forces, he said, equaling some 12 trained brigades, which he said includes anywhere from 800 to 1,600 troops with a varied period of instruction, depending on the type of capability that the brigade needs.

“Training of the Iraqi security forces and anti-ISIL forces includes a tailored approach based off of the needs of the unit and at the request of the government of Iraq and is informed by coalition advice,” he explained.

Critical to the Mosul liberation operation are the ISF local citizens who have been stringently vetted prior to training by the coalition. And it’s the local tribal forces that are key to the Mosul fight.

“[The fight] needs to be people from the area and of the area,” Anderson said.

Anderson noted that Mosul is likely a turning point in the war against ISIL. And liberating Mosul is linked to operations that apply pressure to retake the ISIL-held city of Raqqah, Syria, he said.

“Raqqah is under pressure, and we're continuing to make a difference in terms of their logistics, vehicle-borne bomb factories and command-and-control nodes,” he said, adding, “that's the way the coalition can keep the pressure on while we're waiting for our [Iraqi] partners to develop their plan and to launch their attack at the time of their choosing.”

Anderson emphasized, “But it is the beginning of the end. And [ISIL] knows that. We've already seen signs of leaders abandoning their posts in Mosul, because they know what's coming. They know that Mosul is going to fall.”