NATO needs to approach Russia from a "position of strength," while keeping the channels open for discussions and possible collaboration.

NATO needs to approach Russia from a "position of strength," while keeping the channels open for discussions and possible collaboration, the alliance's supreme allied commander for Europe said here yesterday. 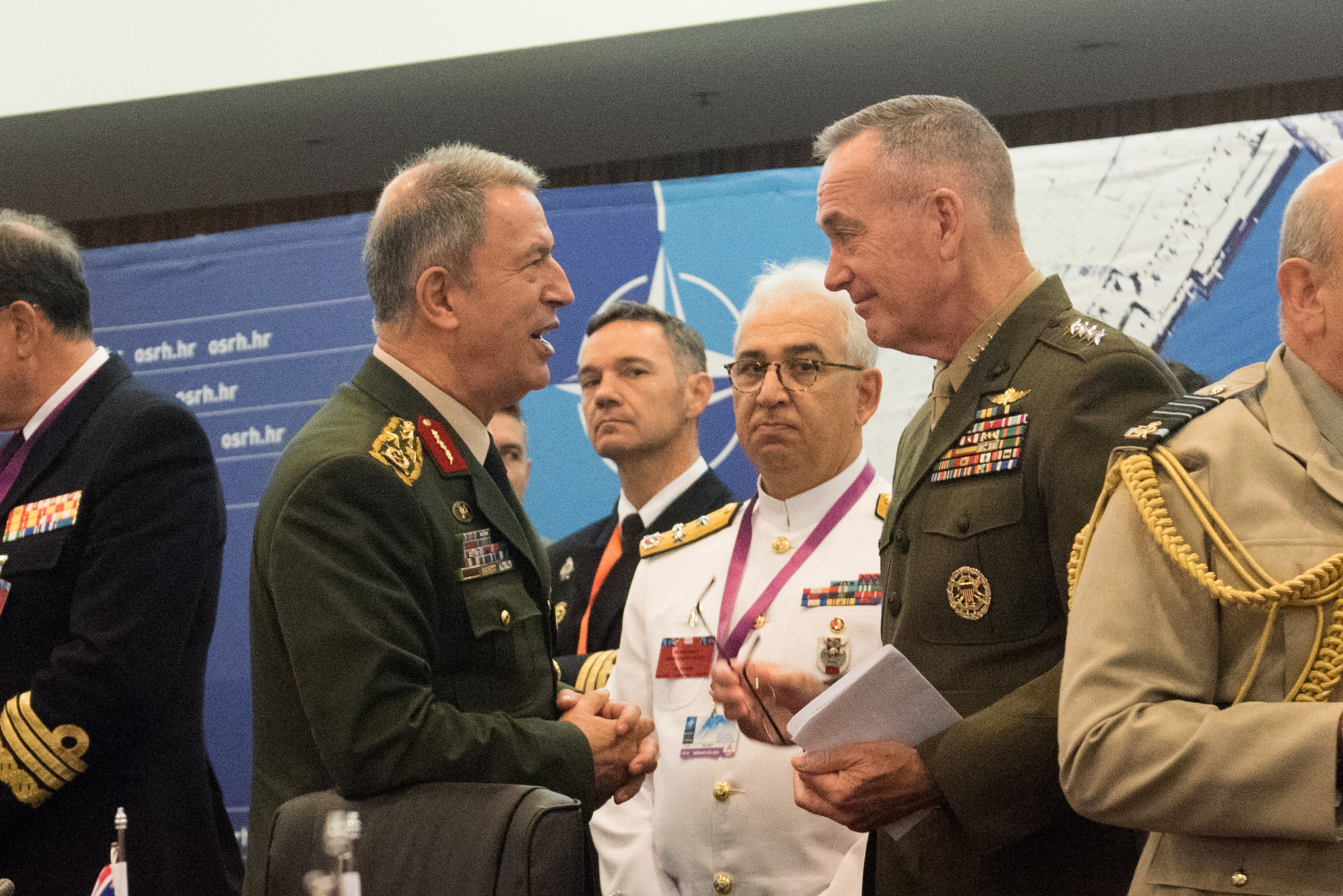 Army Gen. Curtis M. Scaparrotti, who is dual-hatted as a NATO commander and as commander of U.S. European Command, spoke to reporters after a daylong meeting here of the NATO Military Committee, the alliance's highest military authority.

"In the view of the allies, I can tell you from this conference that they recognize Russia's a challenge in many areas," he said.

However, opportunities to collaborate with Russia do exist, Scaparrotti noted. For example, he said, the United States and Russia brokered a ceasefire in Syria and a joint U.S.-Russian operations center could be established to coordinate information in the fight against the Islamic State of Iraq and the Levant.

These kinds of efforts seek to reduce the suffering of the population and find an opportunity to bring some peace, Scaparrotti said.

"To find an opportunity for the players in Syria to begin to work together to a common end, I think it's fair to say that all of us think that's a good move, and it's an opportunity that you got to take advantage of," he said.

The chairman of the Joint Chiefs of Staff, Marine Corps Gen. Joe Dunford, led the U.S. delegation at the NATO Military Committee Conference.

Pragmatic, But Firm in Dealing with Russia

Gen. Petr Pavel of the Czech Republic, the chairman of the NATO Military Committee, said alliance members must stay "pragmatic," but also "firm," in their principles in dealing with Russia.

"We simply cannot talk about and think about Russia in black-and-white format," he told reporters, echoing that there are areas of opportunity with Moscow. "The fact that we have different foundations with Russia, we have different views on many things, doesn’t mean that we can entirely exclude any cooperation with Russia," he said.

Areas of mutual concern include fighting terrorism and ending the suffering in Syria, Pavel said, even though Russian propaganda might seek to explain the ceasefire in Syria as a sign of legitimization.

"But from our side, it is clearly a necessity to facilitate the situation of the civil population in Syria that is desperately in need of humanitarian assistance," he said.

Alliance military leaders had productive discussions on addressing the instability that is threatening NATO's eastern and southern flanks, Scaparrotti said.

"They pulled it to the strategic level, and I think that's very positive and it helps us to think about not only the region itself, but where the linkages are globally," he said.

The challenges — Russia, refugees and extremism — have impacts throughout Europe and beyond, Scaparrotti said, adding that he was encouraged by what he heard at the conference.

Pavel underscored the importance of an outward-looking approach. "To protect our territory and populations, we must also project stability beyond our borders," he said.

In other topics, alliance members discussed the establishment of a NATO presence in Iraq to focus on institution building at the ministerial level and training at the troop level, Pavel said. Also under discussion was increased NATO troop presence in Eastern Europe.

In addition, the chiefs of defense exchanged views on NATO's Resolute Support mission.

There were "no surprises" with regard to the train, advise and assist mission in Afghanistan, a senior NATO official said. "They reaffirmed the approach that we had," the official added.

The NATO Military Committee conference was hosted in this picturesque town on the Dalmatian Coast by the Croatian chief of defense, Gen. Mirko Šundov. A Military Committee conference is hosted each year by an alliance nation. The alliance members examined decisions made at the NATO summit in July in Warsaw, Poland, and are providing military advice in implementing those decisions and addressing those concerns.