MORÓN AIR BASE, Spain ─ Molotov cocktails explode and tear gas fill the streets as U.S. Marines from Special Purpose Marine Air-Ground Task Force Crisis Response–Africa and French gendarmes with Mobile Gendarmerie Armored Group try to control a crowd of rioters in a city street. That is how the scenario played out as the Marines and gendarmes trained together in crowd and riot control techniques at National Gendarmerie Training Center in St. Astier, France, from Dec. 1 to 5, 2014. 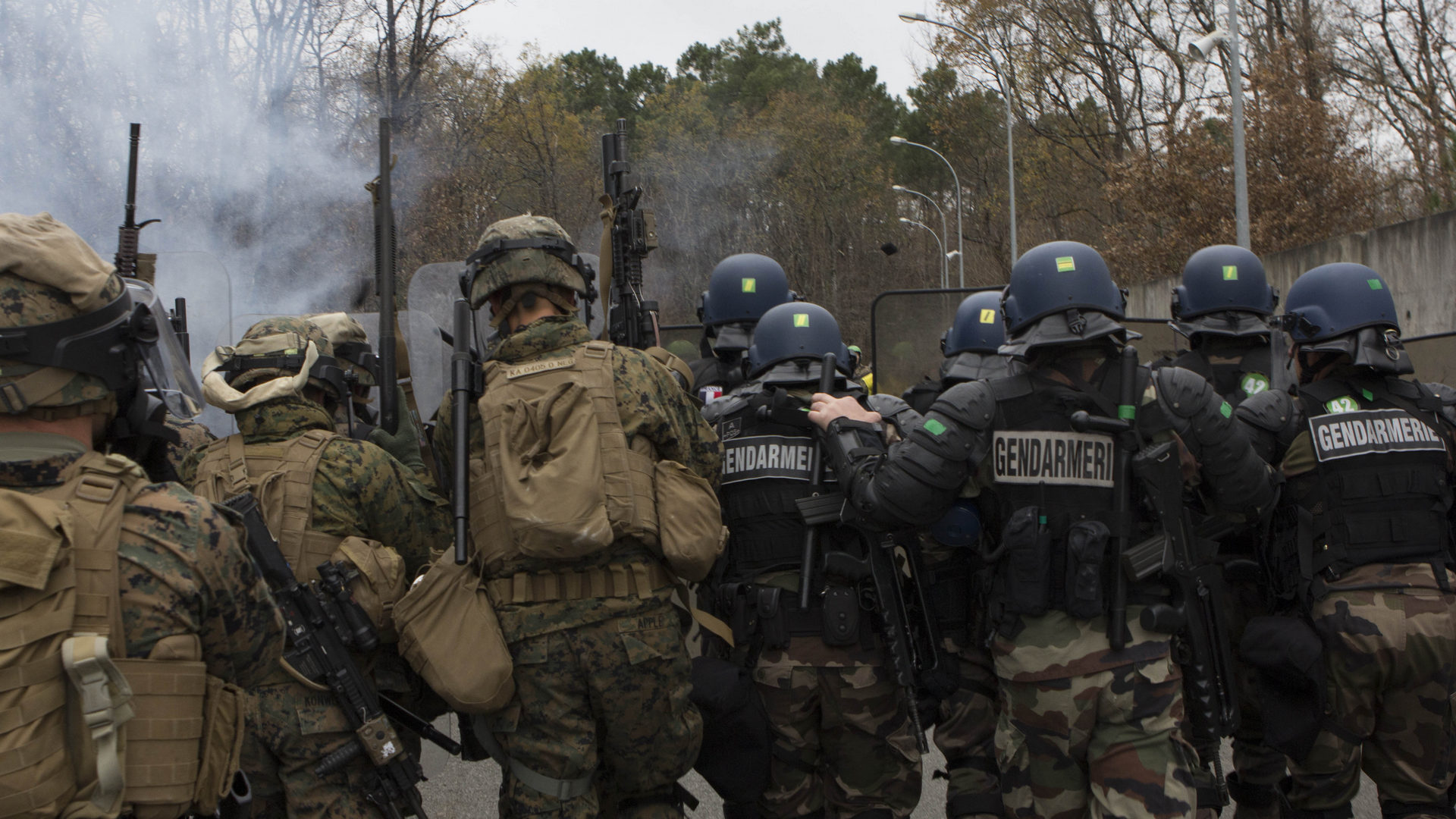 The Gendarmerie, like the Marines of SPMAGTF-Crisis Response–Africa, are called to locations of instability to restore peace and protect national interests abroad. The idea to have the Marines and Gendarmes train together came about approximately 10 years ago. Both are called by their nations to reinforce embassies in the face of a threat or an event of crisis.

During the multi-day event, the Marines and gendarmes shared historical lessons learned, trained in convoy escort and riot control procedures, conducted live-fire training, and built esprit through combined obstacle courses. The training culminated with a scenario that simulated the Marines and gendarmes conducting a partnered mission responding to a crisis in a foreign country, protecting the U.S. and French embassies, and conducting crowd and riot control. 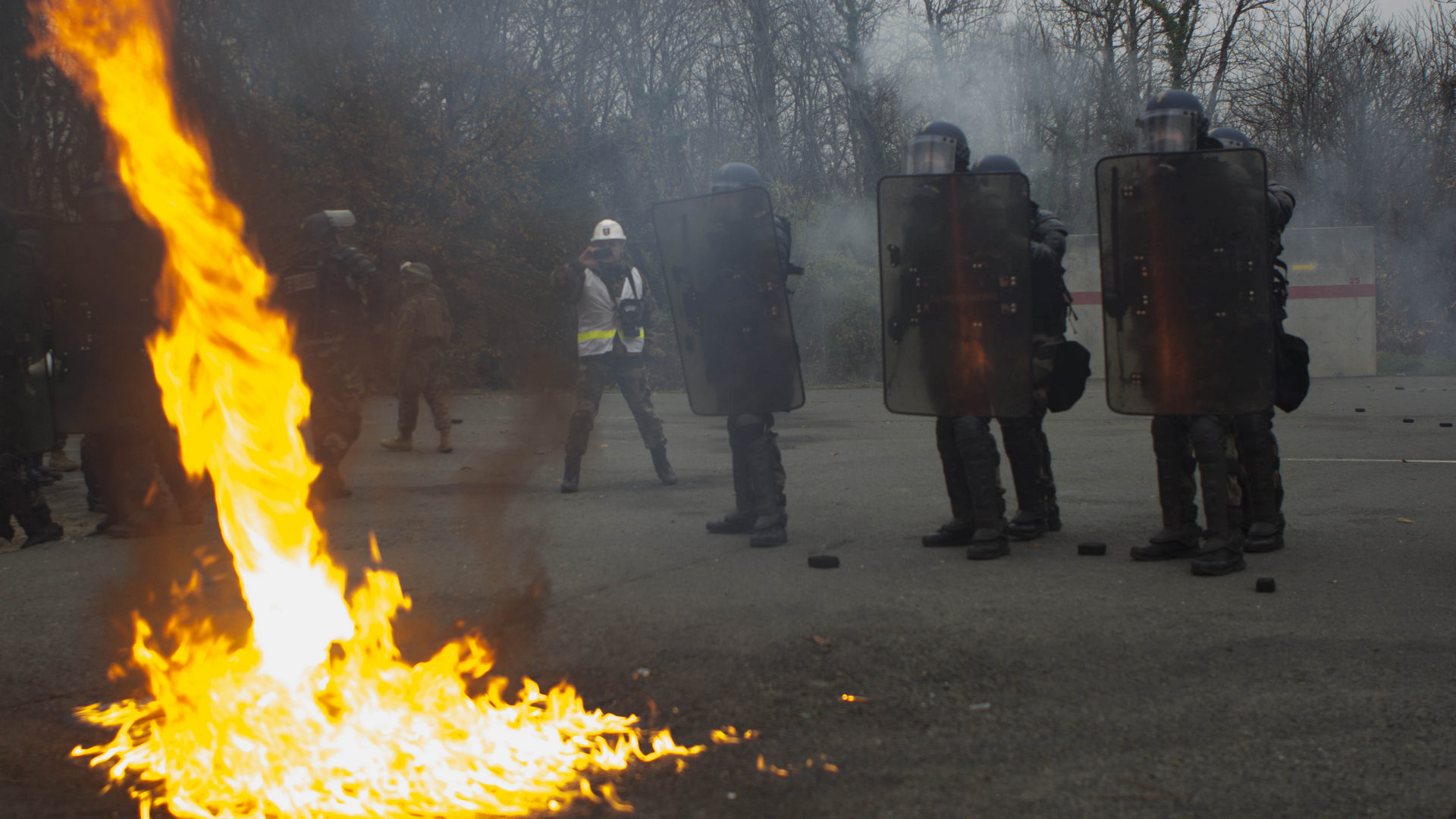 A Molotov cocktail, thrown by Mock rioters, explodes in front of U.S. Marines

“The facilities and training at St. Astier offered a unique experience that we are unable to replicate on Morón Air Base,” said Capt. Brian Green, the exercise officer in charge for SPMAGTF Crisis Response–Africa. “The ability to utilize rubber projectiles, Molotov cocktails, and CS gas during a mock riot brought a higher sense of realism to the training. The French gendarmes and U.S. Marines definitely built a lasting relationship that will continue to grow through further training in the future and will be proven strong if called to work together in Africa.”

The interoperability gained though the training evolution was invaluable as the two units may work together in the future. The exercise allowed the Marines to gain greater knowledge of non-lethal tactics, techniques and procedures while enhancing interoperability with the French Gendarmerie and strengthening the U.S. partnership with France. 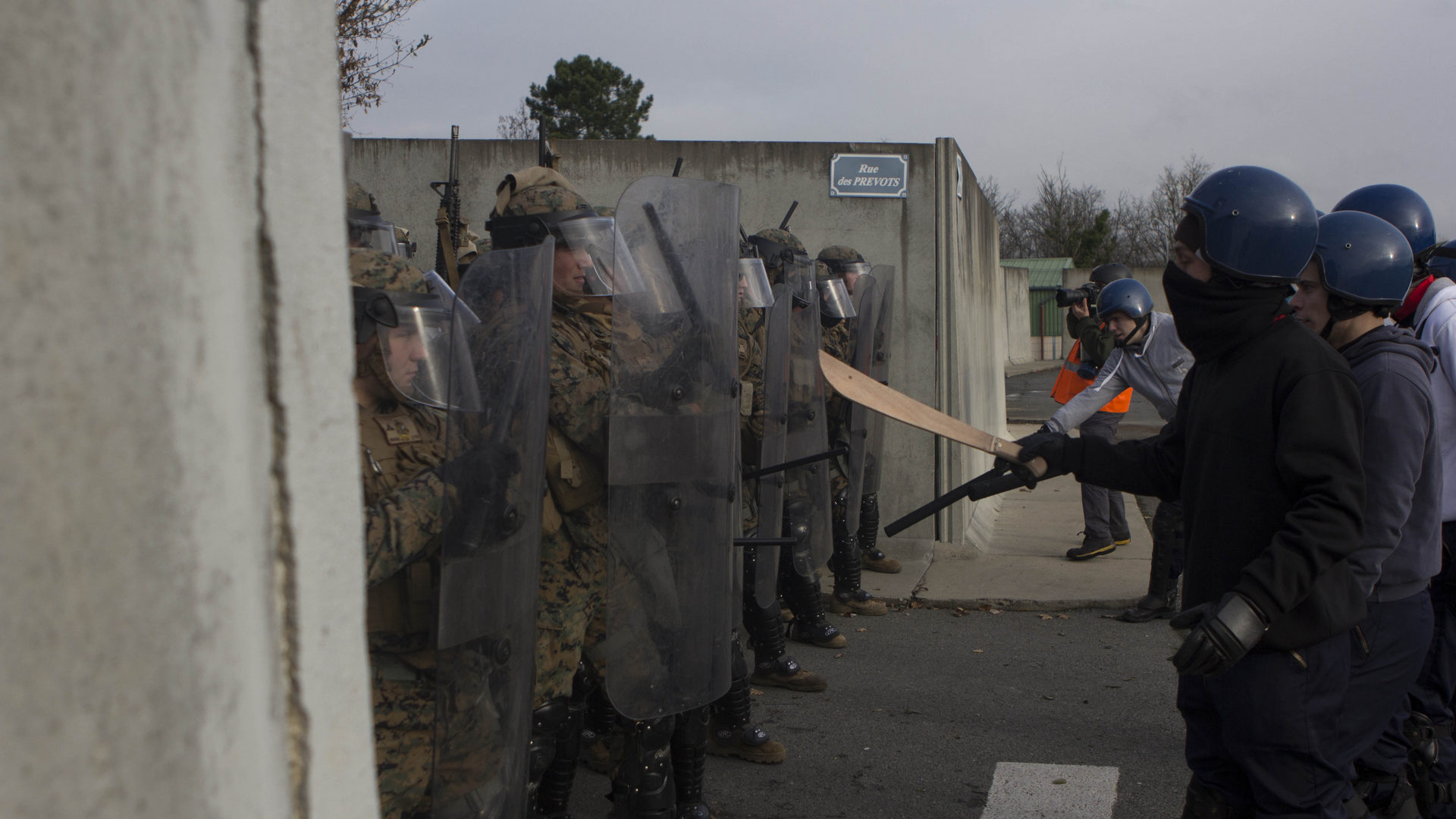 U.S. Marines are taunted by role-playing rioters during crowd and riot control techniques

“Both our nations have been allied for a long time, we even consider ourselves the oldest allies,” said French Gendarmerie Maj. Andre Rakoto, an officer with the Paris Gendarmerie Command. “It makes sense that we may want to combine our forces to conduct joint operations in Africa. In a time of crisis, the French may have to help American nationals and the Marines may have to help French nationals, making this training very good for our future.”

SPMAGTF-CR-AF is postured to respond to a broad range of military operations in the U.S. Africa Command area of responsibility, including: U.S. Embassy reinforcement, humanitarian assistance and disaster relief operations, Tactical Recovery of Aircraft and Personnel (TRAP), training with partner nations, and other missions as directed.