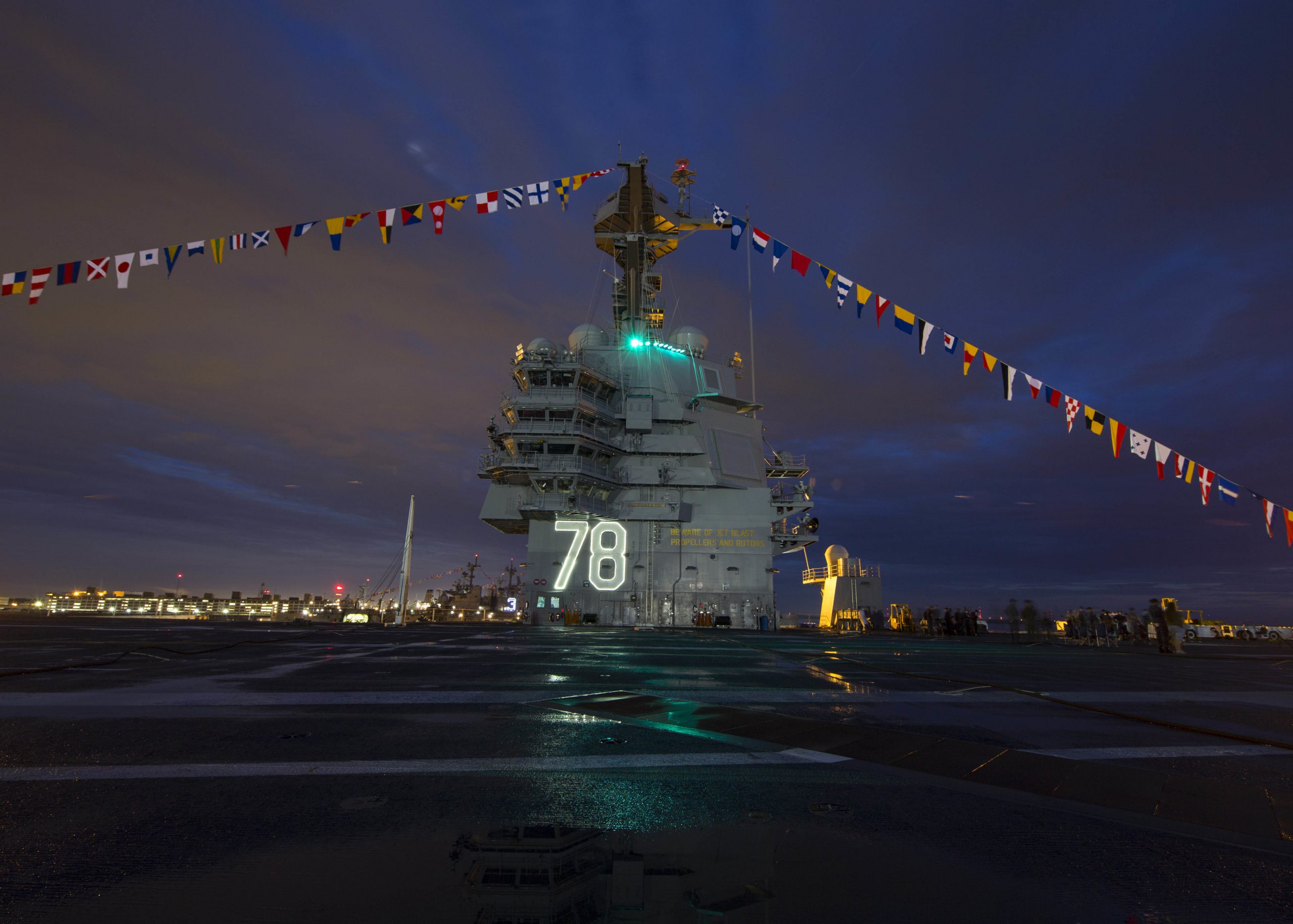 The aircraft carrier Gerald R. Ford displays "up and over" flags

Service members and their families, senior defense and military officials and other dignitaries, including Ford’s daughter and the ship's sponsor, Susan Ford Bales, were aboard the warship for the ceremony.

Gerald R. Ford enlisted in the Navy following the attack on Pearl Harbor and was commissioned as an officer in the Naval Reserve in 1942. He served aboard the aircraft carrier USS Monterey and participated in actions in the Pacific Theater, including at Makin Island, Kwajalein and the Battle of the Philippine Sea. Ford served for 25 years as a U.S. Representative before his appointment to the vice presidency. He became president in 1974, following the resignation of Richard Nixon.

The ship named for Ford is the lead ship of a new class of supercarriers and the first new carrier design in the Navy since the USS Nimitz was commissioned in 1975. The Ford is also the first aircraft carrier to join the fleet since USS George H. W. Bush in 2009. Ford is expected to be in operation in 2020.

The Navy received the Ford on May 31 after the carrier successfully completed acceptance trials on May 26. It features a new nuclear power plant, a redesigned island, electromagnetic catapults and an enhanced flight deck capable of increased aircraft sortie rates. Ford-class carriers will operate with smaller crews than their predecessors in the Nimitz-class.

Mattis called the ship a “magnificent warship [that] joins the best Navy in the world. It is named after a tried-and true member of the Greatest Generation, and that spirit will permeate this ship so long as it sails on the seas, as well as the U.S. Navy spirit of ‘We have just begun to fight,’” he said.

Addressing Trump, Mattis said, “Mr. president, you will send this ship in harm’s way and [it] will happily sail in harm’s way for you, for our nation and for what we stand for.”

Trump called the ship an American symbol of power and prestige wherever it sails in the world. 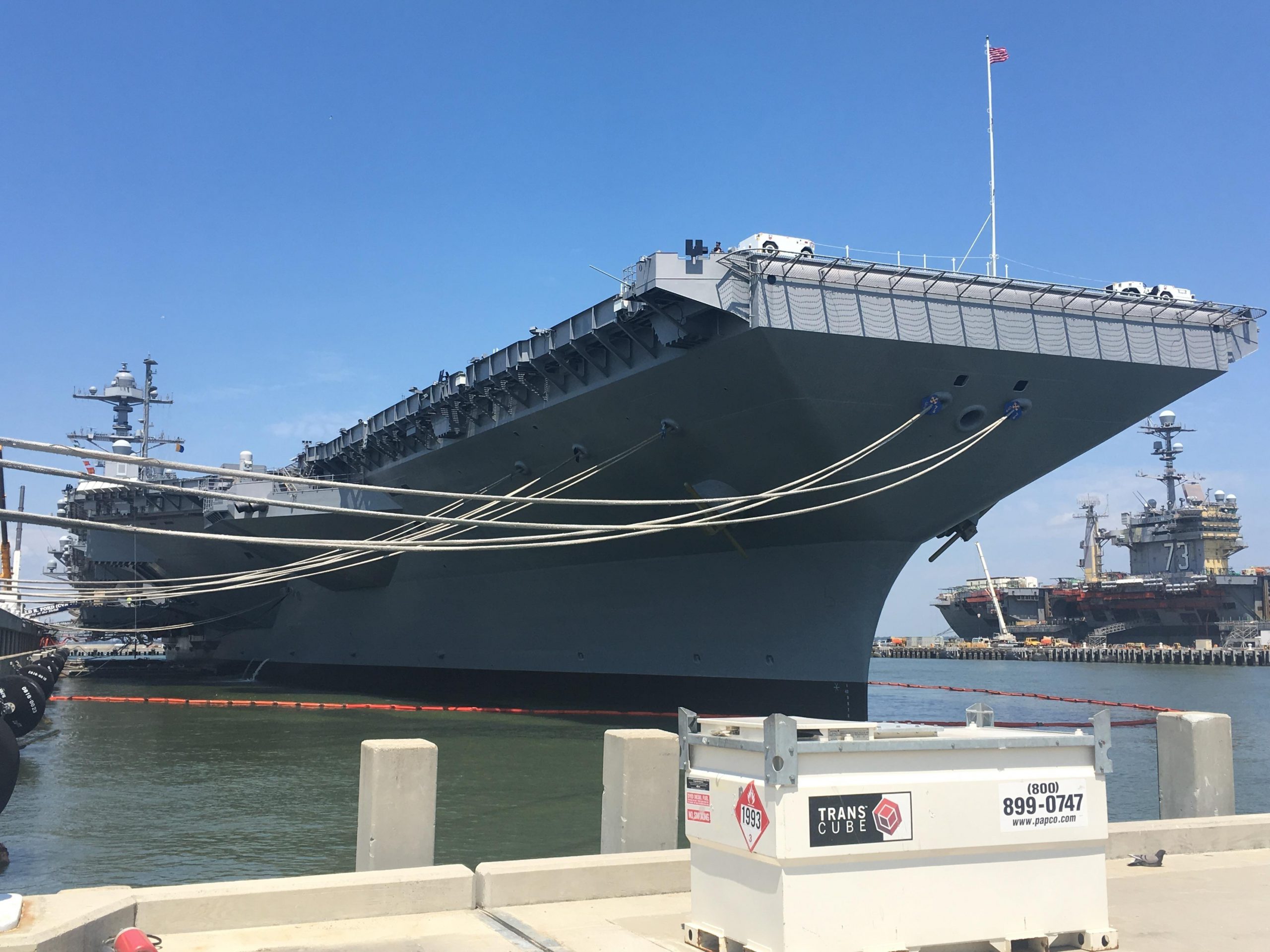 “This ship is the deterrent that keeps us from having to fight in the first place,” Trump said. “But this ship also ensures that if a fight does come, it will always end the same way. We will win … we will never lose.”

Nation’s Strength is its People

Having the best technology and equipment is only one part of the American military dominance, he said. “Our true strength is our people. Our greatest weapon is all of you.”

America is fortunate to have warriors who are willing to serve the nation in the greatest fighting force in history, Trump said, adding, “Today, this ship officially begins its role in the noble military history of our great nation.”

He implored Congress to pass a defense budget that “provides for higher, stable and predictable funding levels for our military needs, that our fighting men and women deserve … and you will get [it], believe me,” Trump told the audience.

At the ceremony's conclusion, Ford Bales gave the order, “Man our ship and bring her to life.”