Los Angeles-class attack submarine USS Oklahoma City (SSN 723) returned to its homeport of Apra Harbor, Guam, after conducting routine patrols throughout the Indo-Pacific region in support of maritime security operations with allies across the region. 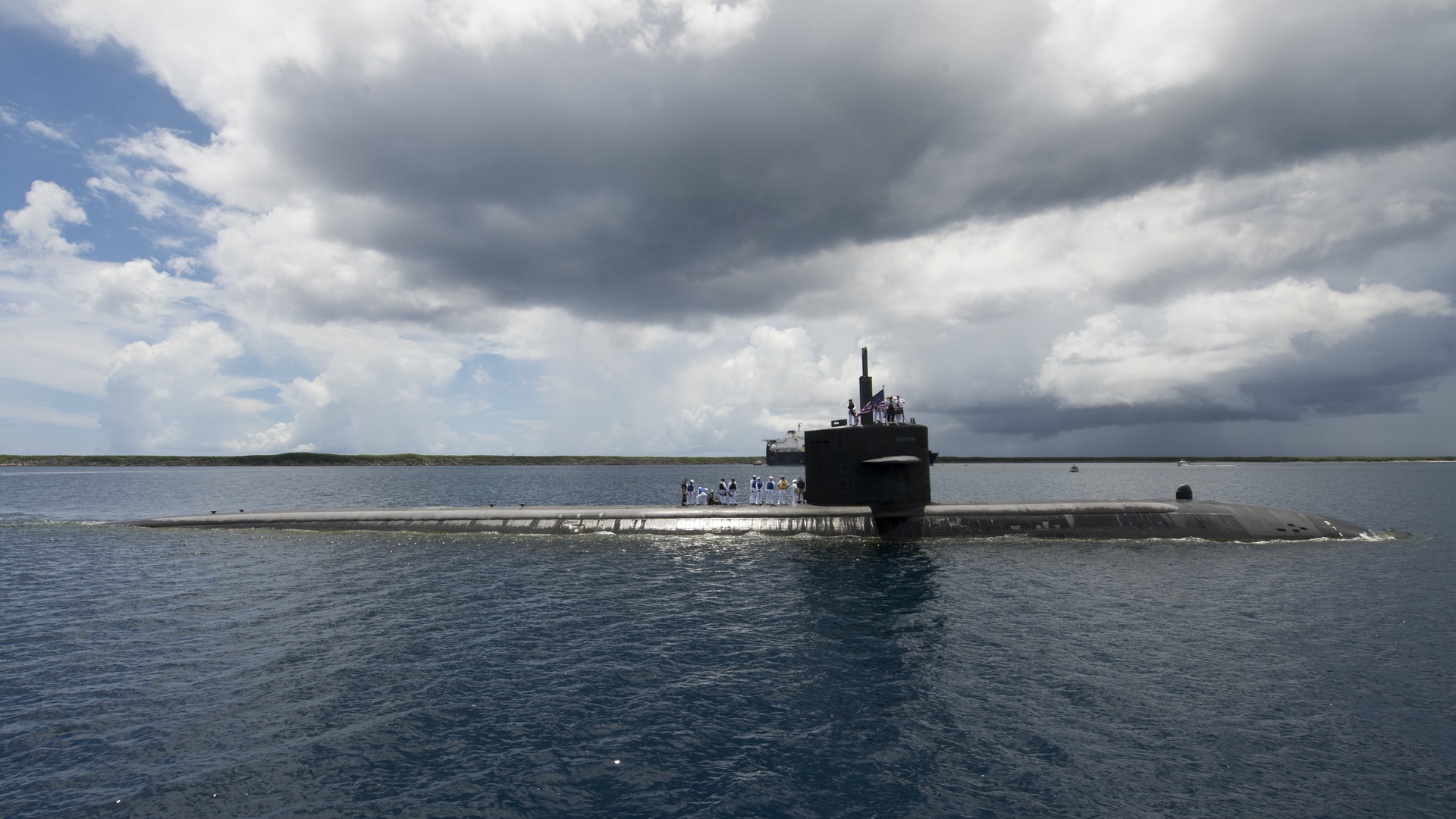 Oklahoma City conducted routine patrols throughout the Indo-Pacific region in support of maritime security operations that promote stability while maintaining key partnerships with allies across the region.

Family and friends were on the pier to greet their Sailors and welcome them back to Guam following their period at sea. Winner of the ceremonial "First Kiss" was Senior Chief Electrician's Mate (Nuclear) Travis Radzyminski's wife Tenille, and Chief Electronics Technician (Navigation) Michael Levy and wife Crystal won the ceremonial "First Hug," which was given by their children.

"I was super excited to win the first kiss," said Tenille. "My husband's always last off the boat, and we are excited to spend quality time as a family."

Oklahoma City, under the command of Cmdr. Thomas O'Donnell, is returning from the Indo-Pacific, where the crew executed the chief of naval operations' maritime strategy in supporting national security interests and maritime security operations.

"We trained hard to ensure we were more than ready to accomplish any mission," said O'Donnell. "I am incredibly proud of my crew's hard work and dedication, and I know everyone is glad to be back home and spend time with family and friends 'TSTB' – The Sooner, The Better!"

Oklahoma City celebrated the various achievements of its crew members in their professional development.

"We had 16 Sailors and three officers become submarine qualified, and 16 Sailors were frocked and four officer were promoted," said Master Chief Fire Control Technician Brandon Edmiston, Oklahoma City's chief of the boat. "The crew continues to challenge themselves professionally and personally, striving to always be better."

Oklahoma City was commissioned July 9, 1988, and is the second ship of the U.S. Navy named for Oklahoma City, Oklahoma. Measuring more than 360 feet long and displacing more than 6,900 tons, Oklahoma City has a crew of approximately 140 Sailors. Oklahoma City is capable of supporting various missions, including anti-submarine warfare, anti-surface ship warfare, strike warfare and intelligence, surveillance and reconnaissance.

Oklahoma City is assigned to Commander, Submarine Squadron (COMSUBRON) 15, which is located at Polaris Point, Naval Base Guam, in Apra Harbor, Guam, and consists of four Los Angeles-class attack submarines. The COMSUBRON 15 staff is responsible for providing training, material and personnel readiness support to these commands. Also based out of Naval Base Guam are submarine tenders USS Emory S. Land (AS 39) and USS Frank Cable (AS 40). The submarines and tenders are maintained as part of the U.S. Navy's forward-deployed submarine force and are capable of meeting global operational requirements.

For more news from Commander, Submarine Squadron 15, visit our official Navy website at http://www.csp.navy.mil/css15 and be sure to 'Like' our official Facebook page, which is located at http://www.facebook.com/SubmarineSquadron15/.

Are you considering Guam as a duty station? Check out the official 'Go Guam!' website at http://www.csp.navy.mil/go-guam/ and the downloadable '1st Fifteen' pamphlet to learn more about assignment to Guam and the unique opportunities here!