The expedition crew aboard the late Paul G. Allen’s research vessel (R/V) Petrel discovered wreckage from USS Wasp (CV 7), which was sunk on Sept. 15, 1942, by two, possibly three, torpedoes from the Japanese submarine I-19 while escorting transports. 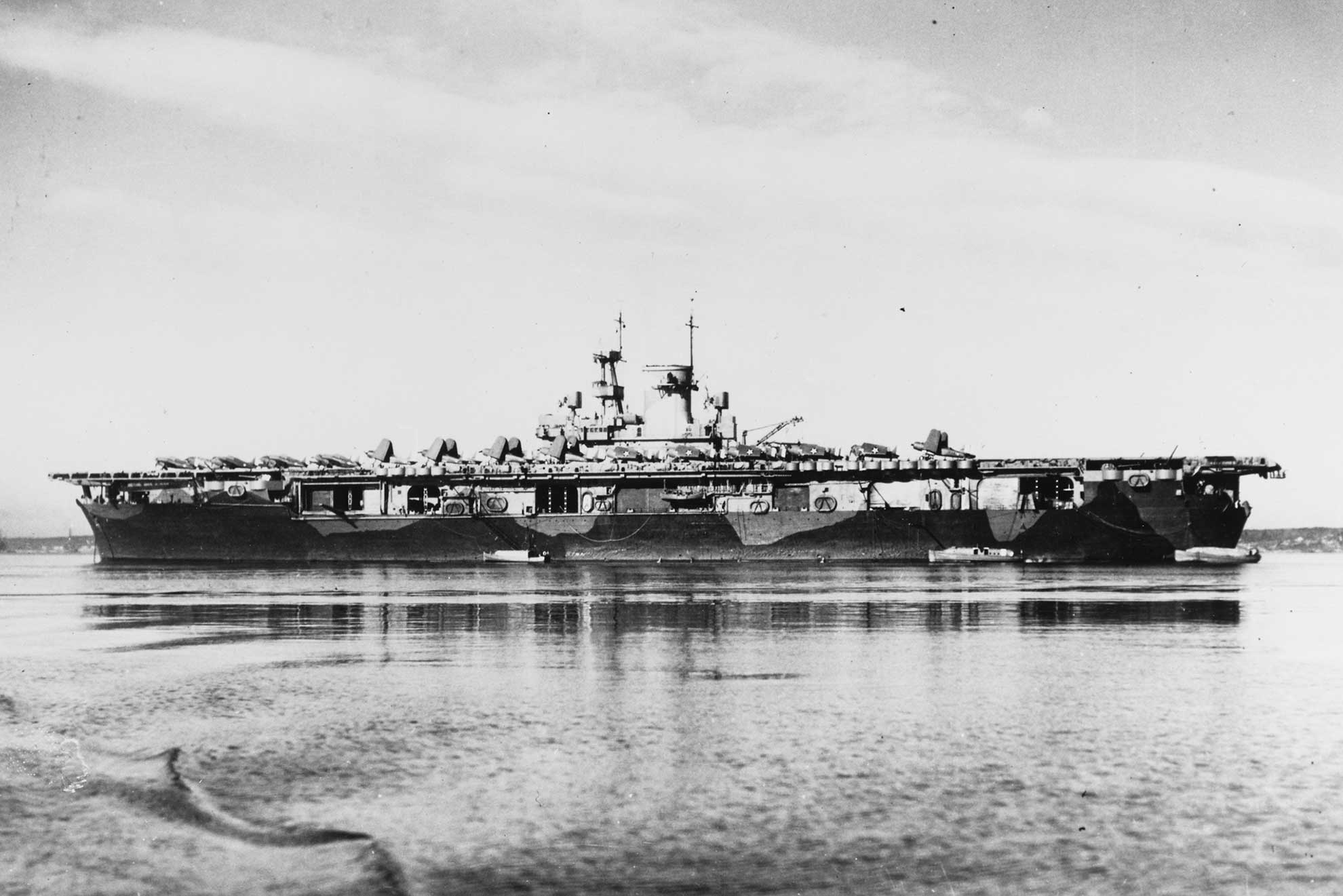 Wasp was sunk on Sept. 15, 1942, by two, possibly three, torpedoes from the Japanese submarine I-19 while escorting transports carrying the Seventh Marine Regiment to Guadalcanal as reinforcements. Of the 2,162 on board, 176 were killed as a result of the attack. 76 years later, the sunken aircraft carrier was found Jan. 14 in the Coral Sea, 4,200 meters (nearly 14,000 feet) below the surface.

“Paul Allen’s passion for U.S. history lives on through these missions. He was dedicated to honoring the brave men who fought for our country,” said Robert Kraft, director of subsea operations for Vulcan Inc. “Paired with the discovery of USS Hornet announced in February, we’re excited to start out the year with these momentous discoveries.”

In 1941, Wasp was assigned to ferry vital army planes to Iceland, supplementing for a lack of British aircraft to cover American landings. The P-40 planes that Wasp carried provided the defensive fighter cover necessary to watch over the American forces. Wasp also aided two very important missions to Malta, a location being hit daily by German and Italian planes. After Wasp’s first mission to Malta, Prime Minister Winston Churchill, fearing that the nation would be "pounded to bits," asked President Roosevelt to allow Wasp to have "another good sting." Aside from providing vital enforcements in WWII, Wasp was the first ship to launch U.S. Army planes from a U.S. Navy carrier, paving the way for future collaboration between the armed forces.

“Wasp represented the U.S. Navy at the lowest point after the start of WWII. Her pilots and her aircrew, with their courage and sacrifice, were the ones that held the line against the Japanese when the Japanese had superior fighter aircraft, superior torpedo planes and better torpedoes,” said Rear Adm. (Ret.) Samuel Cox, director of the Naval History and Heritage Command. “The first year of the war, it was touch and go. Those who served at that time deserve the gratitude of our nation for holding the Japanese back.”

In its final battle, Wasp was hit in arguably the most effective spread of torpedoes in history by a Japanese submarine I-19, which fired six torpedoes. USS North Carolina and USS O’Brien were hit, and either crippled or sunk as well. 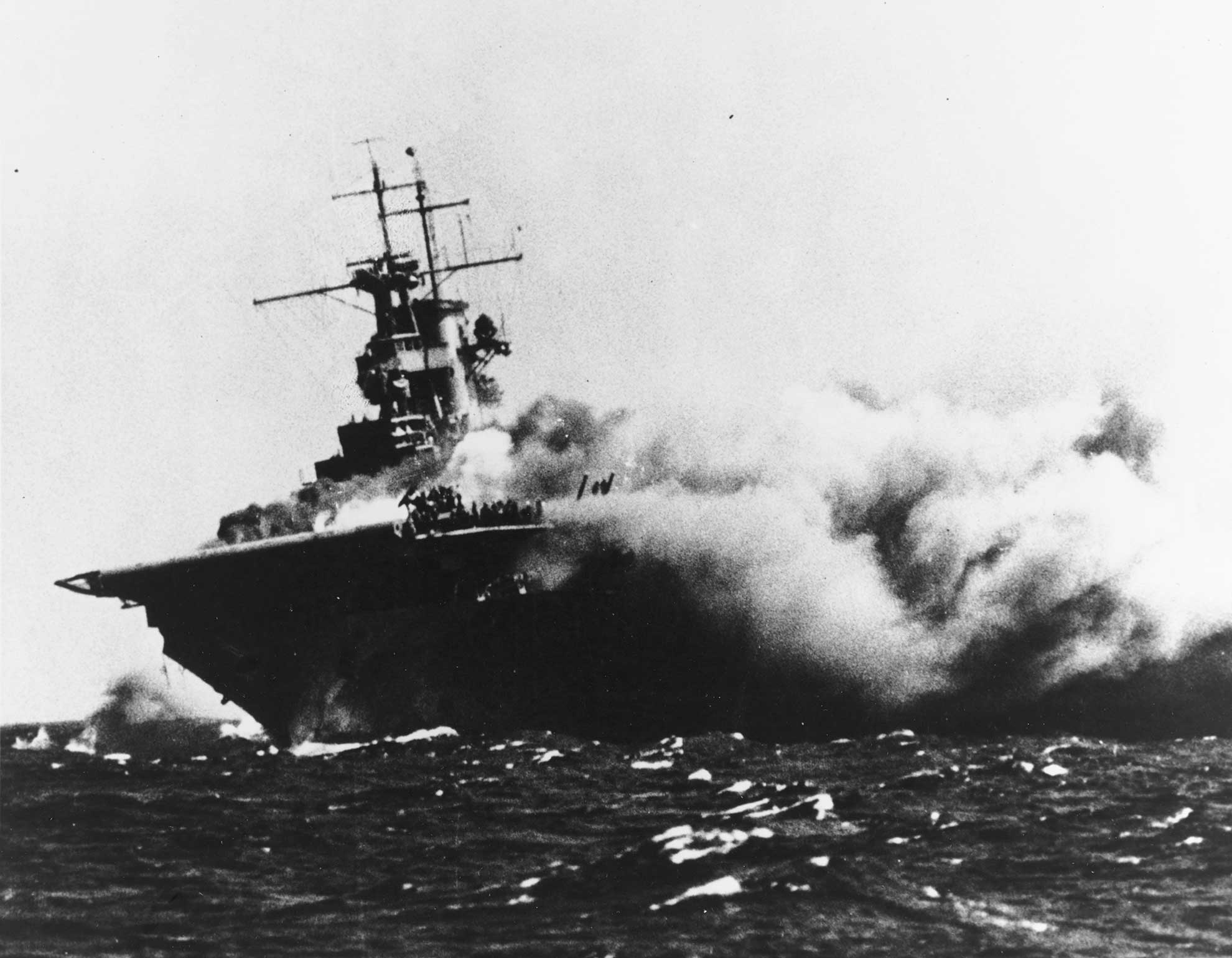 Although the torpedoes that hit Wasp caused a massive inferno on the ship, men showed reluctance to leave until all remaining crewmates were safe. Only when satisfied that the crew had been evacuated did Capt. Forrest P. Sherman abandon the ship. He later became the youngest Chief of Naval Operations to ever serve in the position. Another survivor, Lt. David McCampbell went on from being Wasp’s signal operator to becoming the number one navy ace pilot flying the hellcat fighter.

"The crew of the WWII Wasp exhibited the bravery, toughness and resolve that our crew today strives to emulate. We are humbled by the sacrifice of those Wasp Sailors, especially those who paid for our freedom with their lives,” said Capt. Colby Howard, commanding officer of USS Wasp (LHD 1). “We hope this discovery gives remaining survivors and their families some degree of closure. I would like to sincerely thank the entire R/V Petrel crew, whose commitment and perseverance led to the discovery."

The crew of R/V Petrel has also found the wreckage of USS Hornet, USS Juneau, USS Ward, USS Lexington, USS Helena and perhaps most famously, the USS Indianapolis over the past few years. PBS aired Jan. 8 this year a new documentary titled, “The USS Indianapolis: The Final Chapter,” which highlights the 2017 shipwreck discovery by the crew of the R/V Petrel of what remains the US Navy’s single greatest loss at sea.

Additional past Allen-led expeditions have resulted in the discovery of USS Astoria, the Japanese battleship Musashi and the Italian WWII destroyer Artigliere. His team was responsible for retrieving the ship’s bell from the HMS Hood for presentation to the British Navy in honor of its heroic service.

U.S. Pacific Fleet note: The namesake Wasp (LHD 1) is currently forward deployed to the U.S. 7th Fleet area of operations in support of security and stability in the Indo-Pacific region. The determination and sacrifice of Pacific Fleet ships like USS Wasp (CV 7) in WWII have helped secure more than seven decades of relative peace and prosperity in the region. Today, the U.S. Navy and the Japan Maritime Self-Defense Force (JMSDF) work closely together. In January, the Wasp Amphibious Ready Group (ARG) joined the JMSDF amphibious transport dock ship, JS Kunisaki (LST 4003), for a cooperative deployment. The ARG is comprised of the USS Wasp (LHD 1), amphibious transport dock USS Green Bay (LPD 20), and amphibious assault ship USS Ashland (LSD 48). During the cooperative deployment, ARG ships and JS Kunisaki conducted communication and maneuvering drills. While underway there, the crew of the Wasp joined with the 31st Marine Expeditionary Unit (MEU) in conducting live-fire exercises to hone their lethality as a joint fighting force.