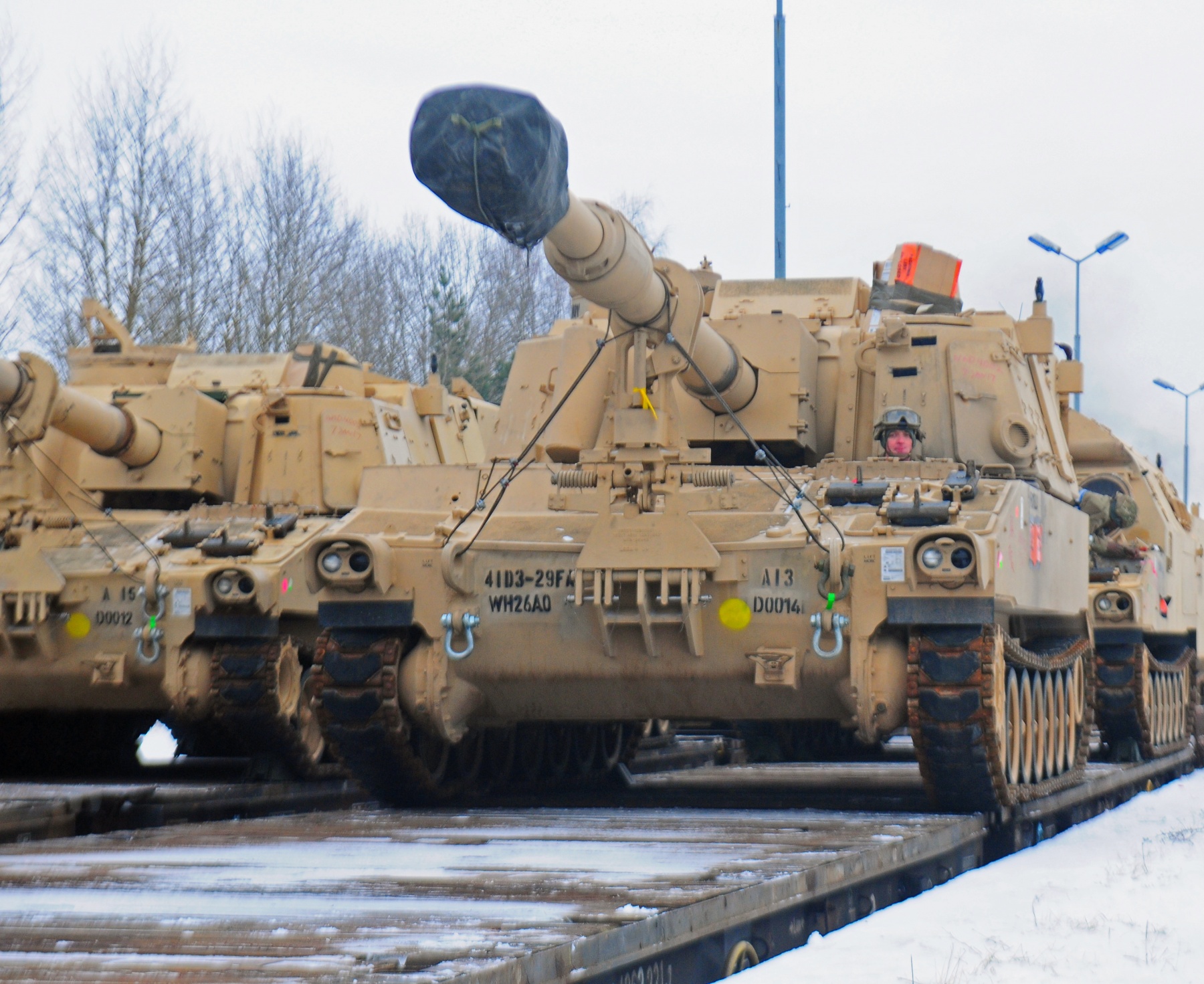 An American soldier drives a M109 Paladin self-propelled howitzer off

In the release, Scaparrotti, who wears a second hat as NATO supreme allied commander-Europe, commented on the Fort Carson, Colorado-based brigade’s movement from Germany into Poland for Operation Atlantic Resolve.

"I would like to thank our allies and commend them on this historic moment, Scaparrotti said. “The European infrastructure and integrated support has enabled our force to rapidly be ready and postured should they need to deter Russian aggression.”

The American brigade “joins regional forces already committed to responsiveness and security; it is great to see our Army at the front, integrated with the combined and joint air and naval forces of the United States, our allies and partners," the general said.

The arrival of the 3rd ABCT’s 3,500 soldiers and its equipment marks the beginning of the presence of such a unit and back-to-back rotations of U.S. troops and equipment in Europe, Pentagon Press Secretary Peter Cook told reporters at a Jan. 5 news briefing.

“This effort is part of our European Reassurance Initiative to maintain persistent, rotational presence of air, land, and sea forces in Central and Eastern Europe,” Cook said.

From Bremerhaven, Germany, the brigade moved by rail, commercial-line haul and military convoy to Poland. Troops and equipment will later be relocated throughout the region for training and exercises with European allies.

Operation Atlantic Resolve is a bilateral security commitment; it is not a part of NATO and its efforts, according to the Eucom release.

According to its website, Atlantic Resolve is a demonstration of continued U.S. commitment to collective security through a series of actions designed to reassure NATO allies and partners of America's dedication to enduring peace and stability in the region in light of the Russian intervention in Ukraine.

Since April 2014, U.S. Army Europe has led land forces efforts on behalf of the U.S. military, by conducting continuous, enhanced multinational training and security cooperation activities with allies and partners in Eastern Europe, according to the Atlantic Resolve website.

Atlantic Resolve demonstrates the U.S. commitment to the security of NATO allies on air, land and at sea, according to the website. To ensure its own security, NATO must have strong, committed and capable allies, which is why the United States has fought, exercised and trained with its European allies for the past 70 years.

The U.S.-European strategic partnership is built on a foundation of shared values, experiences and commitment to a Europe that is stable and prosperous, according to the Atlantic Resolve website.

Eucom is one of the United States' two forward-deployed geographical combatant commands whose area of focus covers almost one-fifth of the planet, including all of Europe, large portions of Asia, parts of the Middle East and the Arctic and Atlantic Oceans. The command is responsible for military relations with NATO and 51 countries with a total population of close to a billion people.