Members of the New York ANG's 106th Rescue Wing head to Hawaii to participate in a joint NASA and DoD mission to evaluate recovery techniques and gear used to recover NASA's Orion spacecraft.

Forty-five members of the New York Air National Guard's 106th Rescue Wing are heading to Hawaii, Feb. 27, to participate in a joint NASA and Defense Department mission to evaluate recovery techniques and gear that will be used to recover NASA's Orion spacecraft, the next generation of American space vehicle. 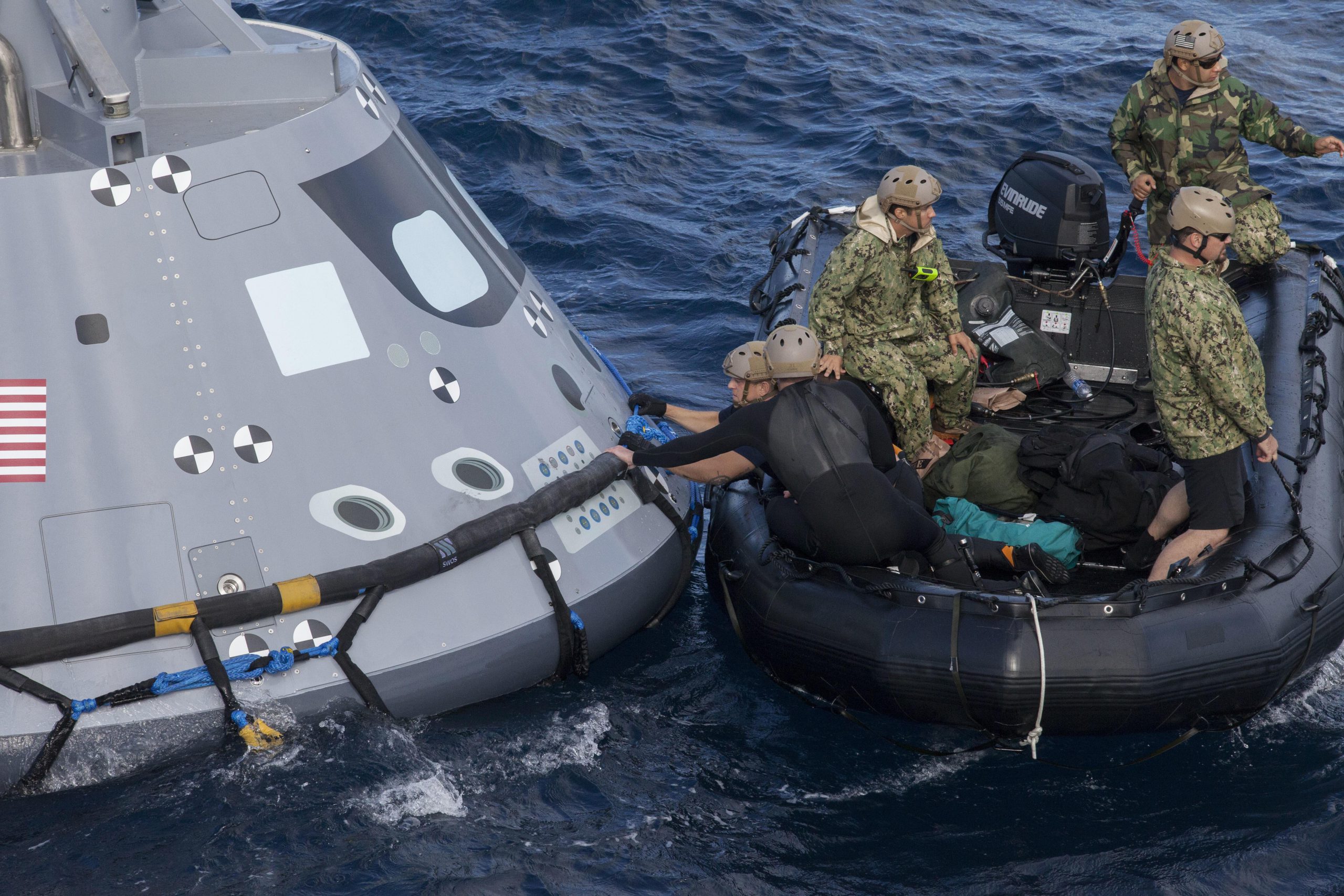 The team of 45 airmen is made up of pararescuemen; combat rescue officers; survival, evasion, resistance and escape specialists; and other support airmen assigned to the 106th Rescue Wing's 103rd Rescue Squadron based here.

Pararescuemen are trained to rescue downed aviators behind enemy lines and from land and water environments. Each pararescue airman undergoes two years of training that includes extensive medical training as well as training in parachute jumping, scuba diving and survival skills.

The pararescuemen are experienced in dropping fully stocked rescue boats to recover personnel.

The New York Air National Guardsmen will work with experts from NASA, the Air Force and the Department of Defense Human Spaceflight Support Office in developing techniques for air-dropping gear needed to recover the crew from an Orion screw module and fit the floating spacecraft with special equipment.

The New York airmen will conduct airdrops and practice helping astronauts out of the spacecraft, providing medical assistance if necessary. The jumps will help NASA and the military test a number of systems and procedures for future launches.

While the 106th airmen will be testing recovery equipment, they will not be working with an actual or simulated Orion capsule.

This is not the first time the New York Air National Guard has been involved in a spacecraft recovery mission.

The 106th Rescue Wing provided a rescue support package at Patrick Air Force Base, Florida, which is located adjacent to the Kennedy Space Center, for 109 of the Space Shuttle missions. The mission of the National Guardsmen was to rescue astronauts who were forced to abandon their spacecraft during the launch sequence.

"We are pleased to be partnering once again with NASA and the Department of Defense on manned space travel. This exercise is one of many steps the 106th will take to ensure the successful recovery of our nation's astronauts should the need arise. This will further demonstrate the versatility and tremendous capability the Airmen of the 106th possess," said Air Force Col. Michael Bank, the commander of the 106th Rescue Wing.

"The personnel of the 106th Rescue Wing are professionals who have proven themselves in both combat and here at home, "said Air Force Maj. Gen. Anthony German, the adjutant general of New York. "We're pleased that they can lend their expertise as NASA plans for the continued exploration of space."

To the Moon and Beyond

Orion is designed to take Americans back into deep space — defined as the moon and beyond.

The spacecraft resembles a larger version of the Apollo space capsule which took men to the moon in the 1960s and 1970s. Like the Apollo command module, the Orion spacecraft is designed to 'splash down" in the ocean instead of landing on a runway like the Space Shuttles, which flew 135 times between 1981 and 2011.

Unlike the Apollo capsules, the Orion crew module is designed to be reusable and will house two to six astronauts instead of three.

An unmanned Orion flew in 2014. The next launch of the spacecraft is due in September 2018. That three-week long mission to the moon and beyond was originally to be unmanned by NASA has announced they are studying whether or not a crewed mission can be conducted.

The deployment of the 106th personnel is part of the Sentry Aloha series of air operations exercises hosted by the Hawaii Air National Guard each year.

NASA's objectives for the mission are to:

— Test the best way to mark the spacecraft's location in the water;
— Test configurations for airdropping recovery equipment;
— Practice the inflation of a "front porch" which would be used by astronauts exiting the spacecraft; test the stabilization collar which will be placed on the Orion capsule before recovery; and
— Test storage capacity for equipment on land.