The Rochefort Group was formed at U.S. Naval War College in August 2018 after associate professor Erin Meehan and Cmdr. Matthew Griffin, both career cryptologic warfare officers, surveyed the information-warfare landscape and concluded that a new effort was needed. 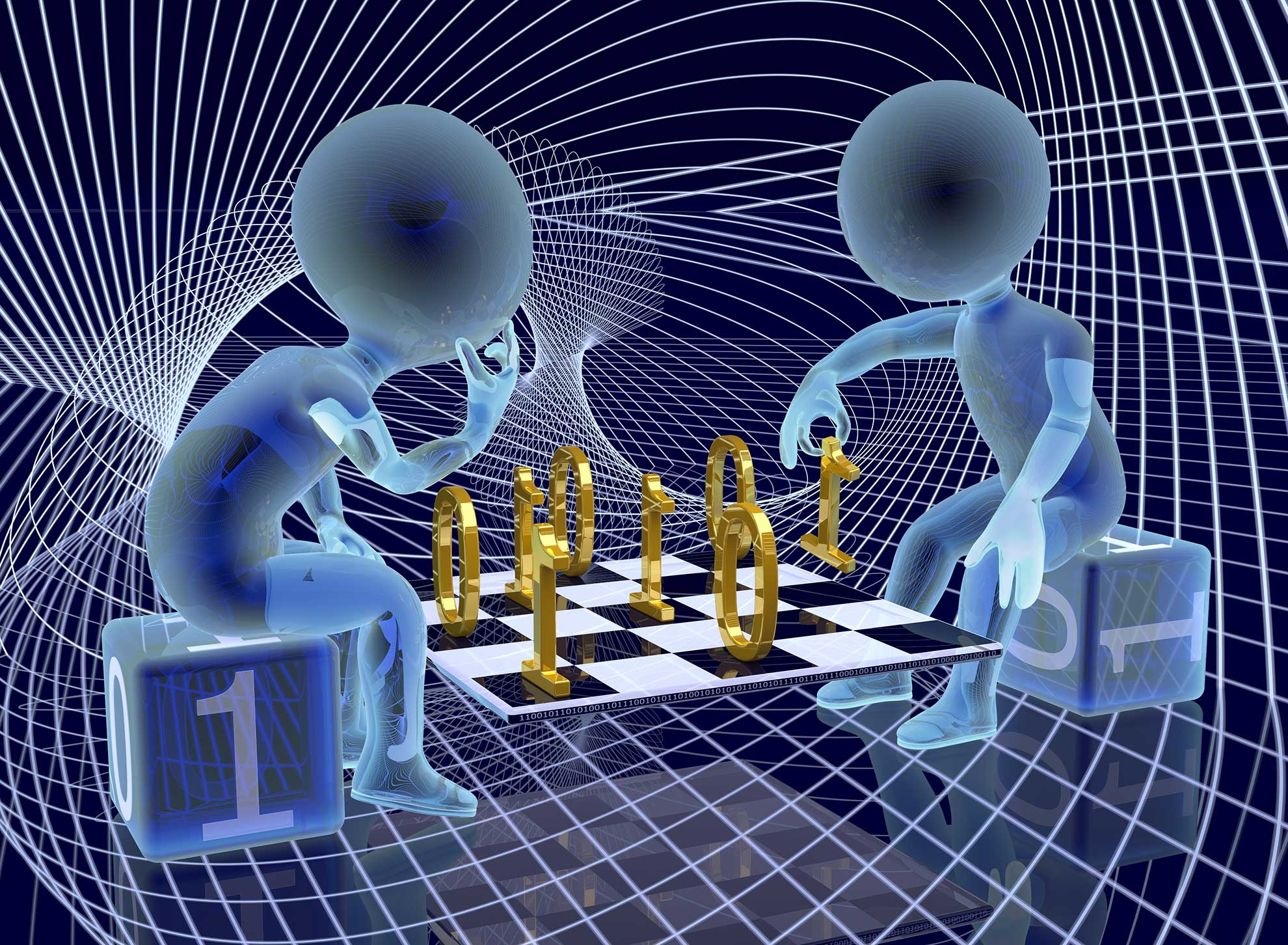 “Critical mass over our careers has shifted so deliberately to information warfighting,” Meehan said.

“Technological advances in warfare, and certainly the great-power competition, have caused us to relook at the threats that are out there,” said Griffin. “Information warfare is at the core of all that.”

News headlines are full of hacking attacks by foreign governments, but the Rochefort Group is focused on information threats at the level of armed conflict – in other words, the localized digital environment that U.S. ships, aircraft and troops face every day when dealing with adversarial nations and factions.

“We need to become as comfortable in the electromagnetic spectrum as we are on the sea,” said Michael White, dean of the College of Maritime Operational Warfare, which includes the new group. “The Rochefort Group is helping us understand and develop that skill.”

The group consists of six Naval War College faculty members with expertise from cybersecurity to submarines, aided by 29 adjunct members. It's a mix of practical and academic knowledge.

They held their first workshop in March, bringing together senior representatives from the information warfare staffs of every Navy fleet. Retired Pacific Fleet Commander Scott Swift moderated the discussion.

“Talking about the challenges that they face at their fleet with their counterparts and colleagues was a big win,” Griffin said.

The Navy’s Information Warfare community is still fairly young. It was created in 2009 by the merger of four areas of Navy expertise: cryptology, the Navy’s traditional codebreakers; meteorology and oceanography, the people who monitor the weather and the seas; intelligence, the people who analyze information; and information professionals, the administrators of computer networks.

These subject-matter experts are still figuring out how to integrate their skills, and events like the one in March are intended to help, said Meehan and Griffin. Rochefort members plan to hold two workshops a year, with the next in August.

At the Naval War College, Meehan and Griffin said they saw a niche where they can help address the gap that has opened between traditional warfare and the digital battlefields of today: education and support of the fleet. 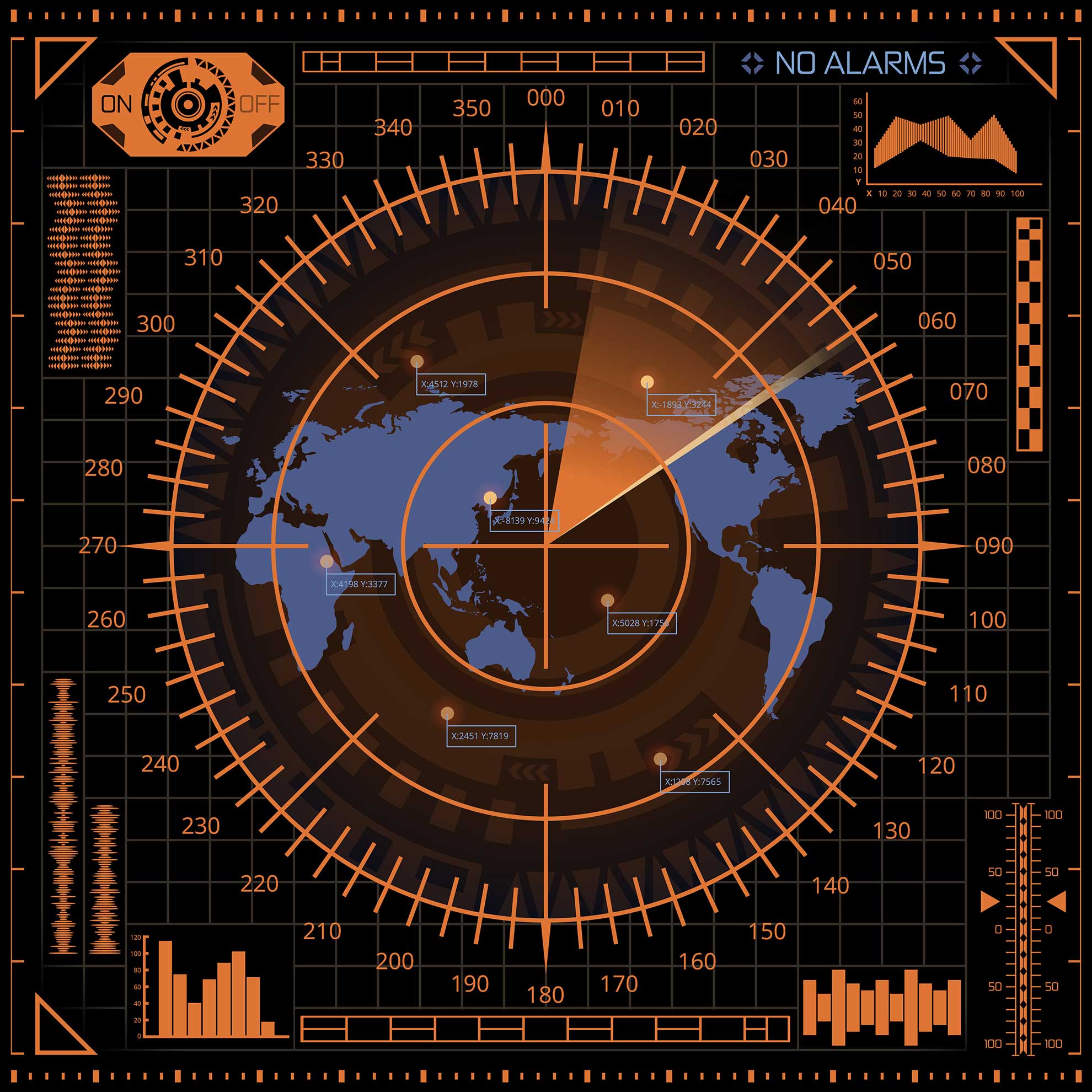 For example, a commander might contact them with a problem along these lines: How do I help my staff members — who are highly trained at flying aircraft or fighting ships – integrate the new field of information warfare operations into their expertise?

The group would make an assessment. Do they put together a team of experts and send them to the commander’s staff for a week-long workshop on that topic? That’s a very likely answer, Meehan and Griffin said.

The broader response to that kind of query has been a series of fleet-oriented classes offered throughout the year on campus, focused on incorporating information warfare into the fight.

“We’re allowed that kind of freedom of thought with a very scientifically heavy subject,” Meehan said. “Being able to do that in an academic environment, I think, is not duplicated anywhere in the fleet.”

Rochefort is not a research group, Griffin said. It doesn’t have students assigned to it, and its members don’t conduct much academic-style research.

The college coined a new term for it: advanced warfighting group.

Its namesake is Capt. Joe Rochefort, the WWII cryptological officer whose codebreaking is credited with helping win the Battle of Midway in June 1942. He was posthumously awarded the Presidential Medal of Freedom in 1986 for his role.

“At that time, the naval force was enamored with battleships, carriers and traditional, conventional warfighting. You had this guy, Rochefort, with a small group of people going after energy and the radio frequency spectrum,” Griffin said.

“It was kind of a sideline effort, and it proved critical. That’s how our community relates to him.”

In five years, the Rochefort members want to be known as a center of excellence — for both the Navy at large and individual information-warfare officers. They’d also like to see the group’s core membership grow, with more faculty members assigned to Rochefort as a full-time project.

“We’d like to institutionalize being a kind of ‘belly button’ for the faculty, the students and the fleet commanders’ staffs,” Meehan said. “Having something clearly defined for this warfare area is important to us.” 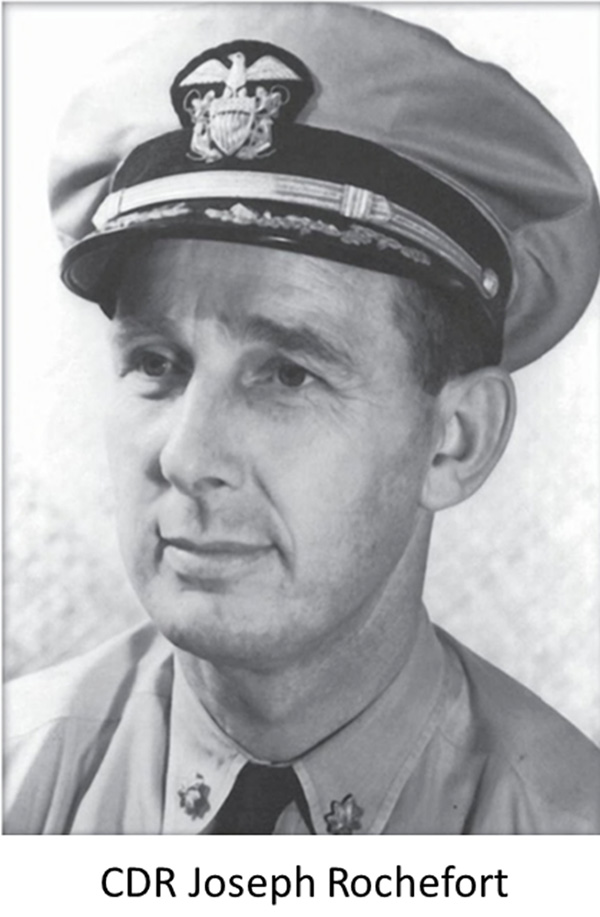 Just months before the infamous attack on Pearl Harbor, in the summer of 1941 a small collection of intelligence analysts, linguists and code-breakers would set up the newly renamed Combat Intelligence Unit in the nondescript basement of building 1, the administrative headquarters of the 14th Naval District.

The unit was also known by the code name Station Hypo. Hypo was charged with the collection and analysis of Japanese radio signals by which the United States hoped to keep a wary eye on the expansionist designs of the Japanese Empire.

The basement, affectionately known as the “dungeon,” was described as a large windowless space crammed with tables full of boxes containing cards and printouts from tabulating machines that would continually spit out messages intercepted from the various receiving stations around the Pacific. There was one entrance in and out guarded at all times by an armed Marine.

Hypo was led by a brilliant officer named Cmdr. Joseph Rochefort who worked tirelessly with his small staff to keep abreast of Japanese intentions. However, in 1941 the American code-breakers were still unable to read the Japanese operational code known as JN-25 and instead were forced to rely on diplomatic traffic, the inconclusive observation of ship movements and routine radio correspondence. As a result, the United States was caught by surprise when Japan launched their raid on the morning of Dec. 7, 1941. But Hypo’s finest hour was yet to come.

By March of 1942 the JN-25 code had been broken and Rochefort and his staff were determined to keep close tabs on Japan’s military forces and stay one step ahead of the enemy’s intentions. From the “dungeon” it was determined that the Japanese would launch an invasion of an undisclosed location known only as “AF.”

Rochefort reasoned that “AF” was Midway Island and that the Japanese would attempt an invasion around June 4. Many in Washington remained convinced that Japan’s next move would be toward the Aleutians, leaving Adm. Chester W. Nimitz with the difficult decision of determining how to best use his limited forces.

Once again the answer came from the basement of building 1 when a brilliant scheme was devised to expose the enemy. A message was sent out across the undersea cable instructing U.S. forces on Midway to send a false radio message in the clear stating that Midway’s fresh water system had malfunctioned.

The Japanese took the bait and soon Hypo intercepted a Japanese message stating that “AF” was having trouble with its fresh water system. Soon Nimitz gave the order to send his available carriers north of Midway to intercept the Japanese strike force and a decisive battle was won, as much by the intelligent exploitation of perceived Japanese intentions as it was by the pilots and crew who sunk four of Japan’s fleet carriers.

In April 1943 the Combat Intelligence Unit would move out of its cramped facilities at building 1 and move into a new home at Makalapa near the Pacific Fleet headquarters. The “dungeon” would lie vacant, serve as storage spaces or administrative offices for the next several decades until its legacy was rediscovered in the last few years. There are now two entrances into the space and a plaque hangs outside each stairway to mark the important events that happened in the darkest days of America’s struggle against Imperial Japan. (Source : CNIC)