Fully restoring the jet will require 550 personnel across multiple maintenance disciplines and cost about $30 million, according to guidance released by Air Force Global Strike Command. The aircraft is expected to be completely restored by early 2021.

Barksdale Air Force Base, Louisianna ─ (AFNS) ─ 14 May 2019. In the cockpit of “Wise Guy,” a B-52H Stratofortress which had been baking in the Arizona sun at the 309th Aerospace Maintenance and Regeneration Group since 2008, is a note that reads: “AMARG, this is 60-034, a cold warrior that stood sentinel over America from the darkest days of the Cold War to the global fight against terror. Take good care of her….until we need her again.” 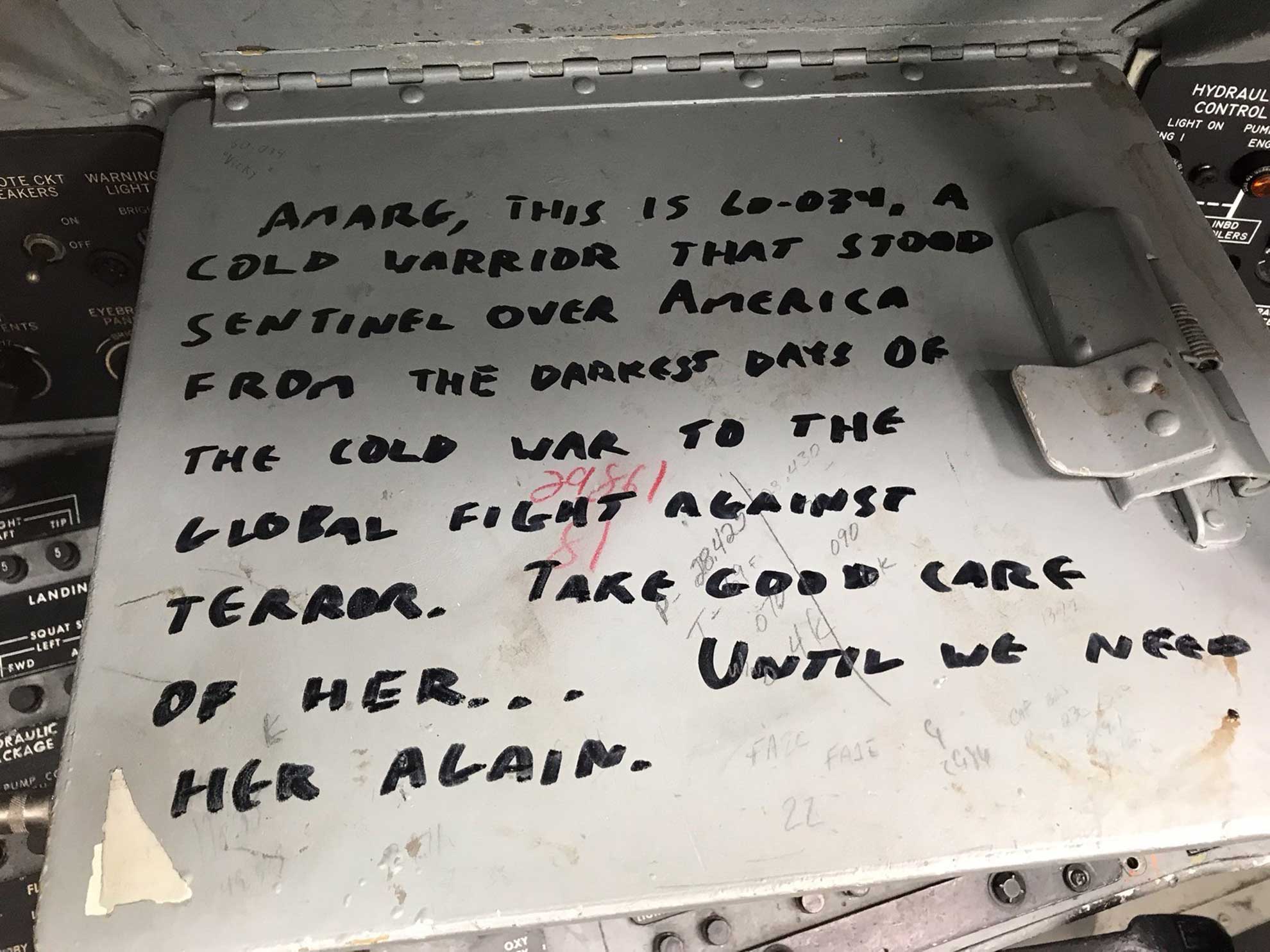 The plea, scrawled on a metal clipboard in black marker, proved to be prophetic when both Reserve and active duty Airmen flew the jet to Barksdale Air Force Base May 14 to begin the next phase of its life protecting U.S. interests at home and abroad. 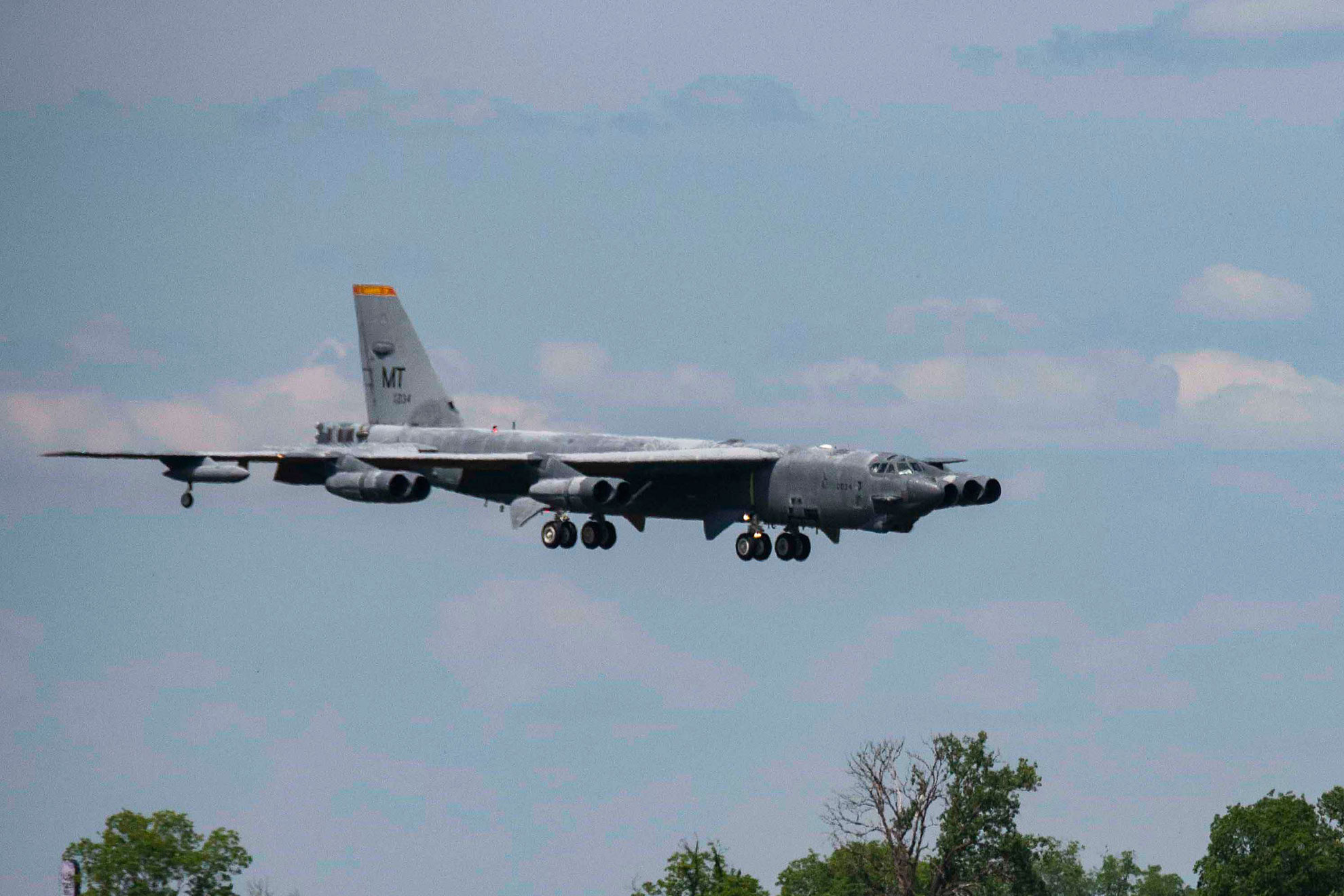 The note’s unknown author probably knew the bomber’s chances of returning to active service were slim. AMARG is often referred to as the “Boneyard” because aircraft sent to the desert environment are normally picked over for parts. Most B-52s sent there never fly again. 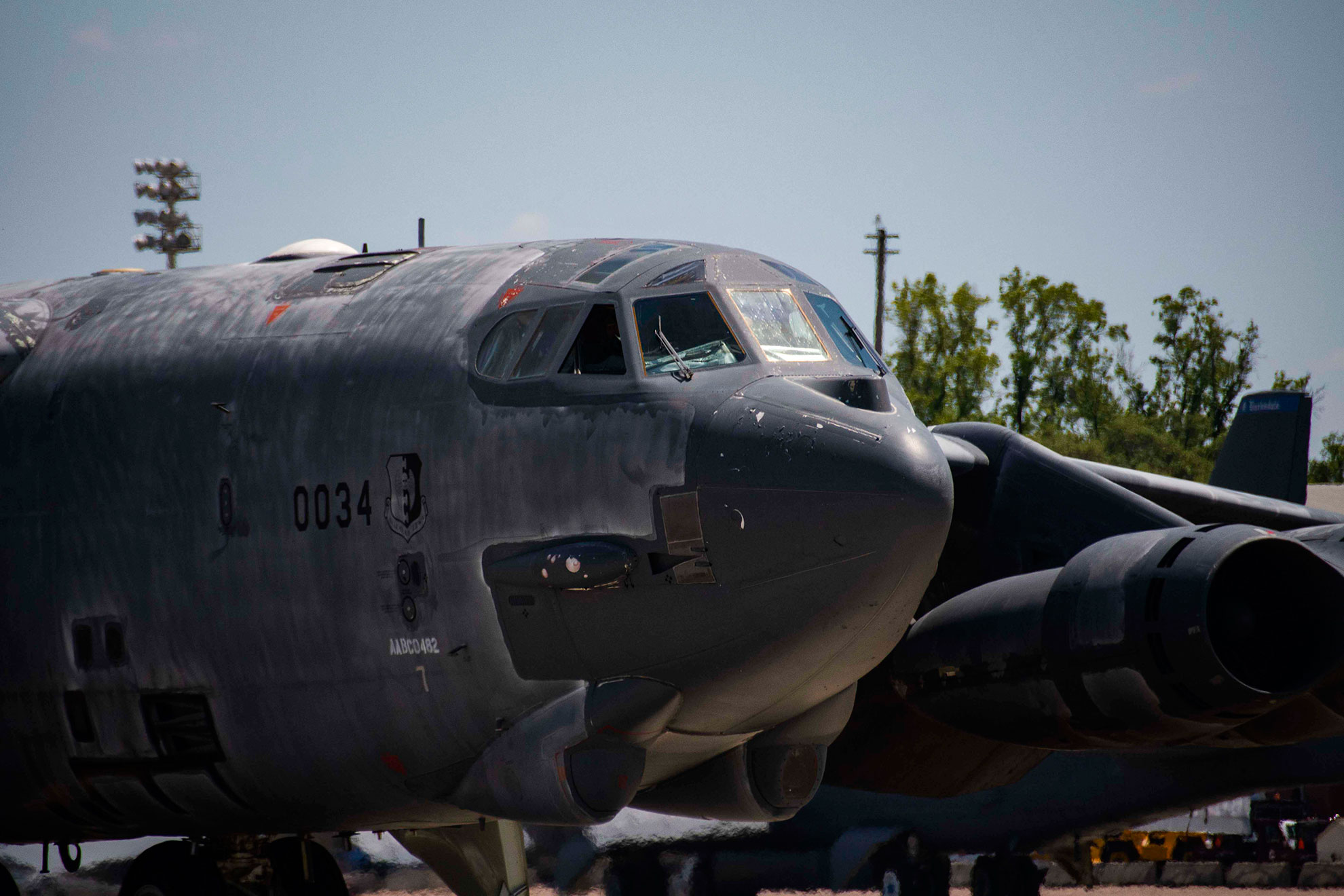 But when the Air Force lost one of its bombers in 2016, it started a chain of events that made “Wise Guy” only the second B-52H ever to be taken from the 309th AMARG for active service. The first, nicknamed “Ghost Rider,” was brought to Barksdale AFB in 2015, also by members of the 307th and 2nd Bomb Wings.

With more than 17,000 flight hours in its history and more than a decade baking in the desert, getting “Wise Guy” airworthy required help from multiple sources. 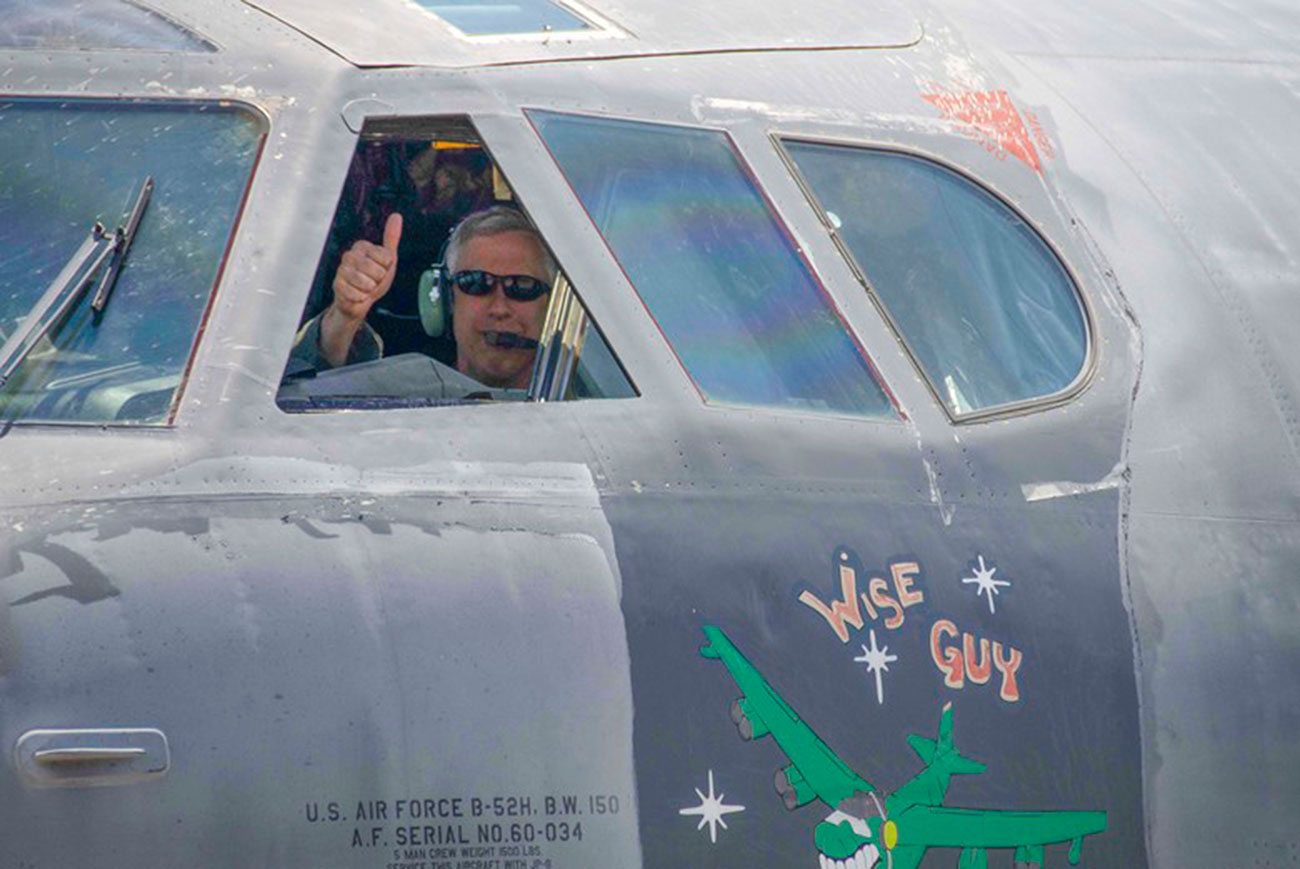 “This was a command wide effort, with reservists and active duty offering a great deal of experience,” said Col. Robert Burgess, 307th Operations Group commander and pilot for the flight. “It took four months to get ready, so it was really a small effort on the aircrew side and a major effort on the maintainer side.” 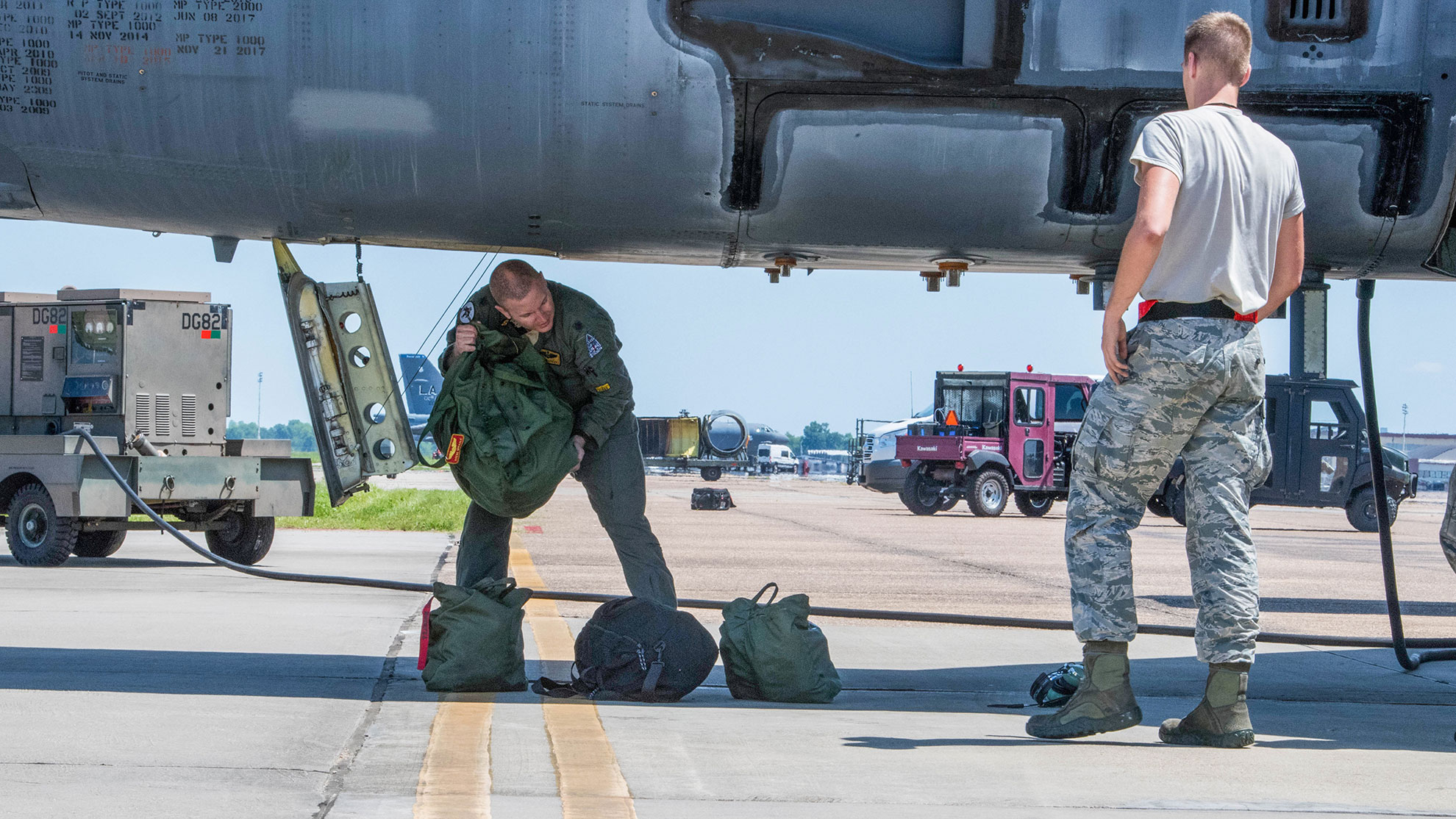 The bomber had a team of 13 to 20 maintainers working on it at any given time, said Master Sgt. Steven Sorge, a 307th Maintenance Squadron fuels system mechanic.

“The jet had cracks in the rear landing gear and was missing two engines,” he said. “It also needed all its fuels cells and hoses replaced, as well as its tires.”

“All of our parts for repairing the ejections seats were basically in a five-gallon bucket,” he said. “It was like putting together a jigsaw puzzle.”

Fortunately, maintainers like Sorge and Barnhill have a deep well of experience, having worked on B-52s for more than two decades. They also had the advantage of the total force integration system, which combines the experience of Reserve Airmen from the 307th BW with active-duty Airmen from the 2nd BW.

“TFI worked great out there for us,” Barnhill said. “The active-duty Airmen in our shop and those from 2nd BW worked well as a team and were a big help.”

Once the maintainers completed the necessary repairs, they ran multiple tests on the engines, landing gear, fuel and egress systems to ensure the jet was flight worthy.

From there, it was all up to the air crew to get the bomber to Barksdale AFB. The three-man crew, with more than 10,000 flying hours between them, flew the B-52 low and slow all the way to Louisiana.

With the bomber safely at Barksdale AFB, Barnhill had time to reflect on his role in saving “Wise Guy” from becoming a historical footnote.

“Bringing a bomber out of AMARG is a once in a lifetime chance and I have been able to do it twice,” he said. “It’s just an honor to bring it back into service.”

Fully restoring the jet will require 550 personnel across multiple maintenance disciplines and cost approximately $30 million, according to guidance released by Air Force Global Strike Command. The aircraft is expected to be completely restored by early 2021.