A spectrum of state and nonstate actors across multiple regions and domains calls for a new way of harnessing the maritime domain, the commander of U.S. Southern Command said at the Surface Navy Association’s 29th National Symposium here today.

A spectrum of state and nonstate actors across multiple regions and domains calls for a new way of harnessing the maritime domain, the commander of U.S. Southern Command said at the Surface Navy Association’s 29th National Symposium here today. 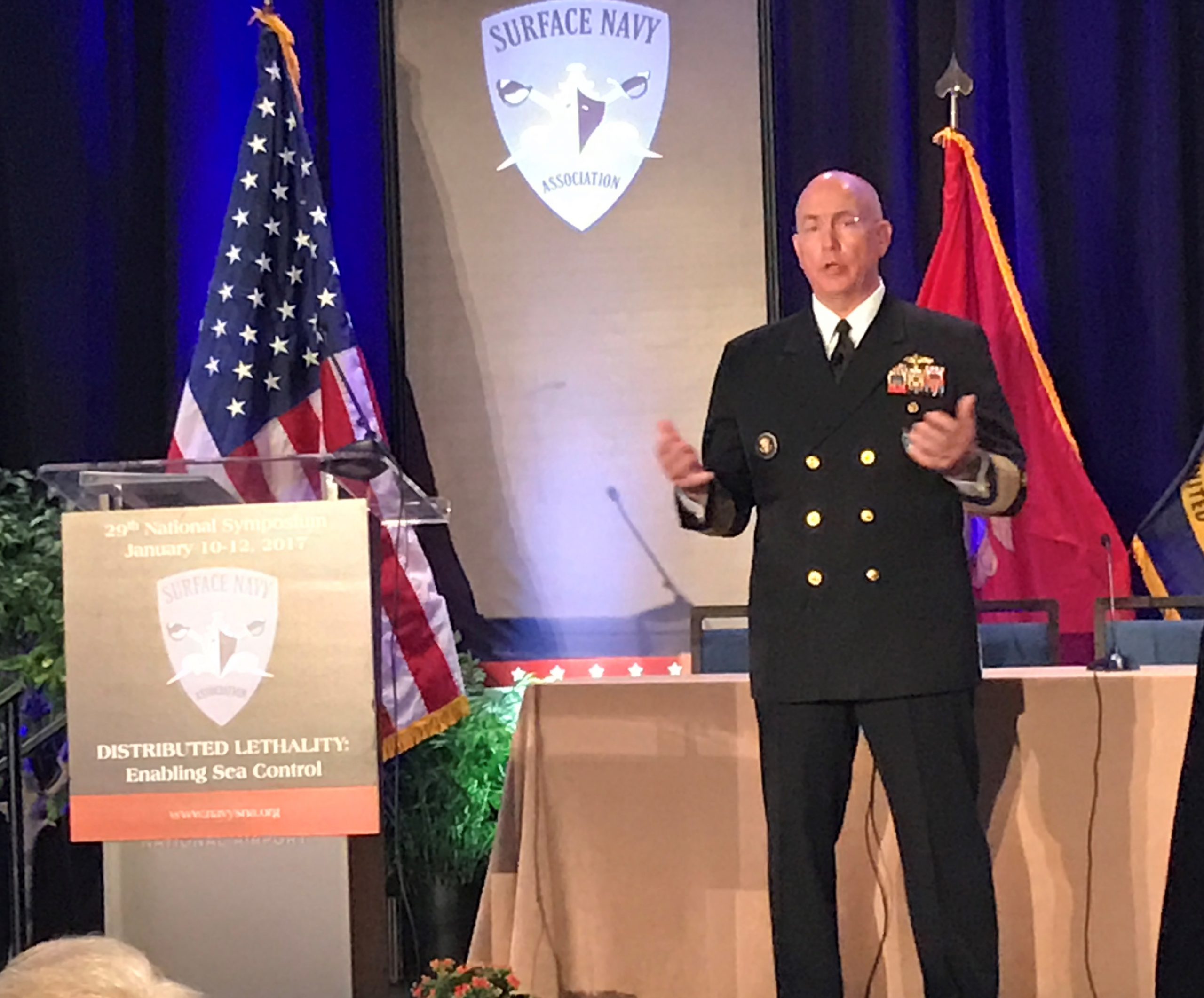 At the three-day conference focusing on surface warfare, Navy Adm. Kurt W. Tidd said hybrid and complex threats are here to stay on land, sea and every domain, globally.

“What this requires [is] a different way of thinking in how we control and dominate in the maritime domain,” Tidd said. “If we’re going to be relevant, our thinking should be shaped by the realities of today’s multipolar world, and it should reflect today’s transnational and transregional threats.”

Tidd said U.S. security interests are not challenged by a single adversary in one region, but by a range of actors in multiple regions across multiple domains, simultaneously.

Such incidents, the admiral said, are part of broader campaigns and strategies of state and nonstate actors using the full range of military and paramilitary activities: information operations, cyber, sea, air, space and political manipulation to achieve economic leverage and coercion and the exploitation of civil society.

“We see a whole host of nonstate actors exploiting the maritime global commons to traffic in people, weapons, and illicit drugs,” he said.

“It is so intermixed — and often so subtle — that some fail to recognize these activities in the gray zone as belligerent and frankly of any concern,” the admiral said. “Yet they form layers of a coherent strategy, compressed and interwoven … it all should be seen as multiple strands of a single woven tapestry.”

In the context of complex, hybrid, unrestricted competition, nonstate actors are within networks that move people, weapons and drugs in a range of ever-evolving maritime conveyances such as fishing vessels, semi-submersibles, and full-submersibles, he said.

“Each illicit conveyance that reaches its destination further erodes maritime and border security and sovereignty, not just of our partners, but of the United States, as well,” the admiral said.

In years past, combatant commands took on regionally compartmentalized roles to monitor and face threats in China, Russia, Iran, and with nonstate actors and narcotics control, Tidd said.

“We need to be thinking about how these competitors, both state and nonstate, view, use, and exploit the maritime domain,” Tidd said. “We need to assess the full hybrid toolkit at their disposal and how they’re able to work against our Navy and our nation.”

This, he said, mandates a closer look at how domains are connected, and how different forms of distributed lethality inherent in naval forces can pressure and attack networks of adversaries from the sea.

“These illicit networks operate unrestrained by laws, unimpeded by morality and fueled by enormous profits,” Tidd said. “They prey on weak institutions, transcend international borders, and exploit the interconnected nature of our modern financial transportation and technological systems.”

“All the right players are talking to each other,” he said, “but there doesn’t seem to be a common awareness or a shared way of seeing and acting on these problems.”

“We need to think bigger. We need to dream bigger,” Tidd said. “How can we grow and … incentivize innovation-minded junior officers to challenge traditional naval paradigms through mentally agile approaches and to emerging problems?”

Providing the U.S. military with the right tools to examine and assess massive quantities of classified and publicly available data to mitigate threats and exploit identified opportunities is key, Tidd said.

And that, he added, is best achieved and sustained not through any single platform, capability or service, but by an application of integrated effects from multiple instruments of national power.