President Donald J. Trump today announced a new national security strategy rooted in a whole-of-government approach that stresses the economic might of the United States. « With every decision and every action, we are now putting America first »…

President Donald J. Trump today announced a new national security strategy rooted in a whole-of-government approach that stresses the economic might of the United States. 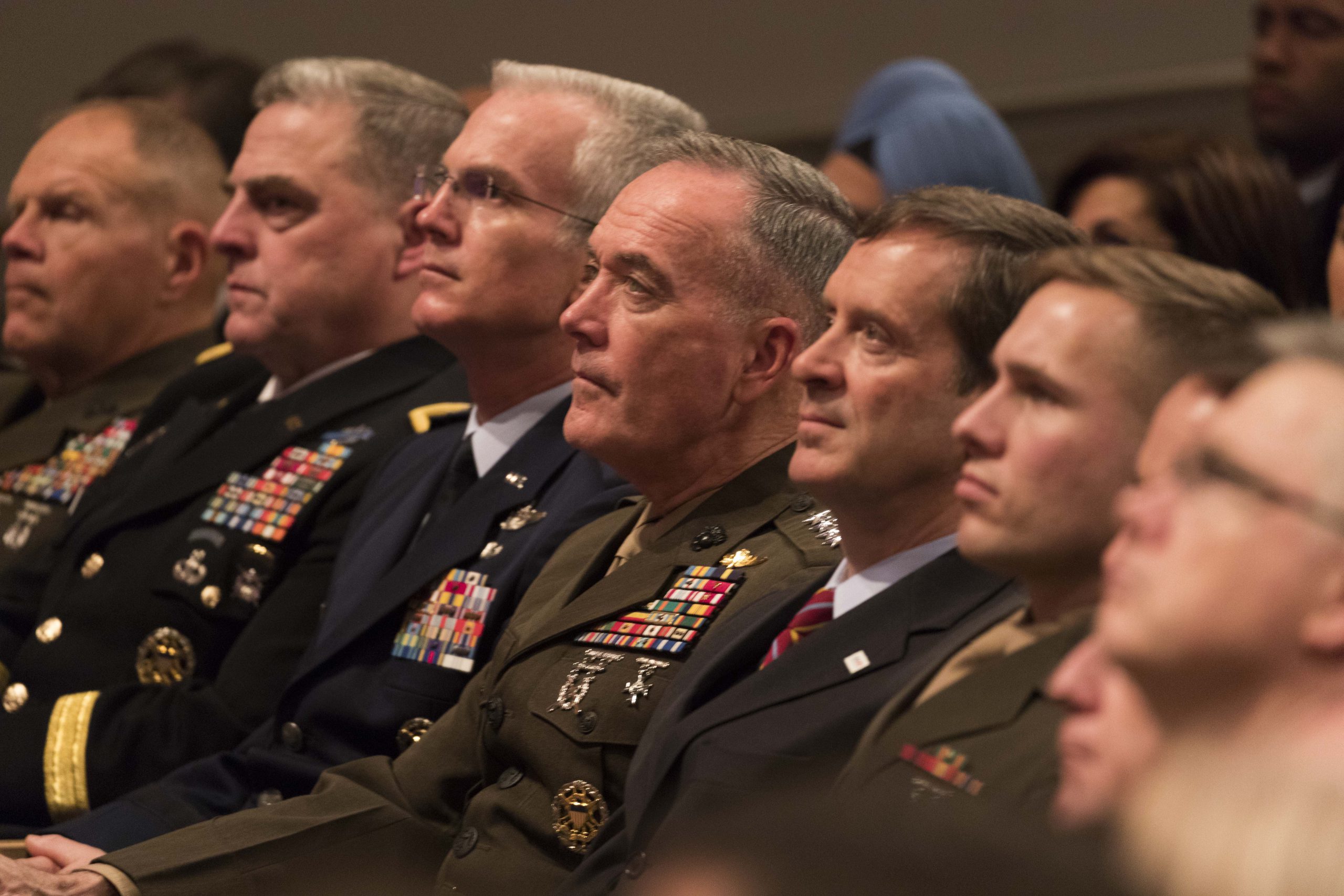 Chairman and members of the JCS listen to President Donald J. Trump

« As the world’s most lethal armed force, the men and women of the United States military ensure our diplomats always speak from a position of strength, » he said. « Supported by our allies and partners, we will continue to defend our common security interests as we protect America from those seeking to threaten the freedoms we enjoy. »

Trump announced the new strategy during a speech at the Reagan Building near the White House. The national security strategy sets the stage for the national defense strategy and the national military strategy.

“With every decision and every action, we are now putting America first,” the president said. “We are rebuilding our nation, our confidence and our standing in the world.”

“We are demanding extraordinary strength, which will hopefully lead to long and extraordinary peace,” he said. “We are giving our courageous military men and women the support they need and so dearly deserve.”

ISIS and Other Threats

Trump also spoke about specific threats such as Iran, North Korea, Russia and China, and he touted efforts against the Islamic State of Iraq and Syria.

“Following my trip to the Middle East, the Gulf States and other Muslim-majority nations joined together to fight radical Islamist ideology and terrorist financing,” he said. “We have dealt ISIS one devastating defeat after another. The coalition to defeat ISIS has now recaptured almost 100 percent of the land once held by these terrorists in Iraq and in Syria. Great job.”

To keep this momentum moving, the United States must integrate every dimension of national strength, “and we must compete with every instrument of our national power,” the president said. “With the strategy I’m announcing today, we are declaring that America is in the game, and America is going win.”

The strategy advances four vital national interests. The first is to protect the American people, the homeland and the American way of life. “We cannot secure a nation if we do not secure our borders,” Trump said. “So for the first time ever, an American strategy now includes a serious plan to defend our homeland.”

In addition, the strategy also calls on America to confront, discredit and defeat radical Islamic terrorism and ideology, and to prevent it from spreading into the United States. “We will develop new ways to counter those who use new domains, such as cyber and social media, to attack our nation or threaten our society,” he said.

The second pillar is economic. “For the first time, American strategy recognizes that economic security is national security,” the president said. “Economic vitality, growth and prosperity at home is absolutely necessary for American power and influence abroad. Any nation that trades away its prosperity for security will end up losing both.”

Preserving peace through strength is the third pillar of the new strategy. “We recognize that weakness is the surest path to conflict, and unrivaled power is the most certain means of defense,” Trump said. “For this reason, our strategy breaks from the damaging defense sequester. We’re going to get rid of that.”

Trump said the strategy calls for a total military modernization, and reversing previous decisions to shrink the force. “It calls for streamlining acquisition, eliminating bloated bureaucracy, and massively building up our military, which has the fundamental side benefit of creating millions and millions of jobs,” he added.

New military domains of space and cyberspace have key roles in the strategy, the president said. “This strategy outlines important steps to address new forms of conflict, such as economic and political aggression, and our strategy emphasizes strengthening alliances to cope with these threats,” he said. “It recognizes that our strength is magnified by allies who share principles and our principles, and shoulder their fair share of responsibility for our common security.”

Finally, the strategy seeks to advance American influence, which begins with building wealth and power at home. “America will lead again,” Trump said. “We do not seek to impose our way of life on anyone, but we will champion the values without apology.”

The United States values strong alliances and partnerships, based on cooperation and reciprocity, the president said. “We will make new partnerships with those who share our goals and make common interests into a common cause,” he added.

“We will pursue the vision we have carried around the world over this past year, a vision of strong, sovereign and independent nations that respect their citizens and respect their neighbors, nations that thrive in commerce and cooperation, rooted in their histories and branching out toward their destinies.”