Exercise Northern Edge 2019 is the largest joint military training exercise on and above central Alaska ranges and the Gulf of Alaska, which prepares joint forces to respond to crises in the Indo-Pacific. 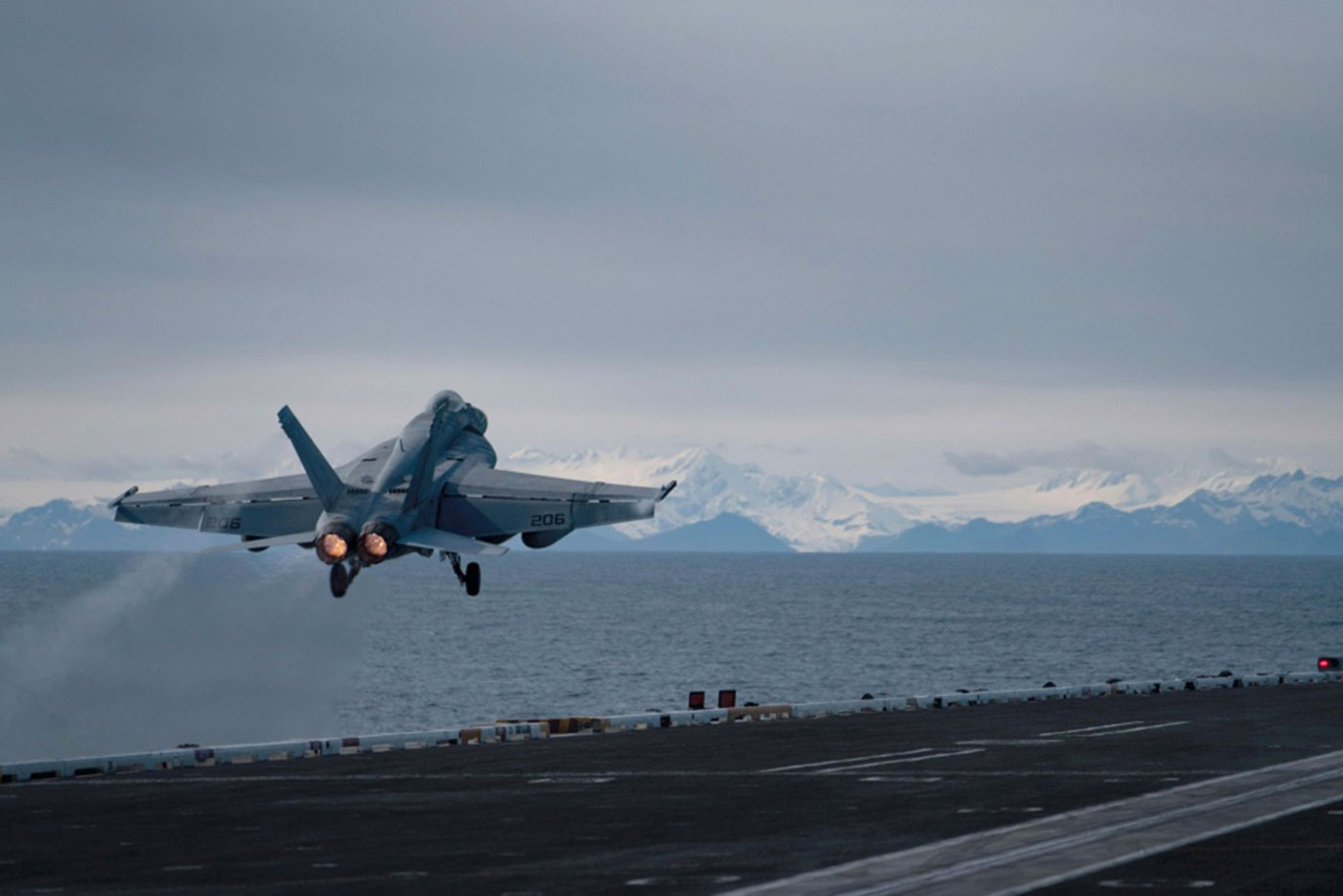 NE19 is the largest joint military training exercise on and above central Alaska ranges and the Gulf of Alaska, which prepares joint forces to respond to crises in the Indo-Pacific.

“We are excited to be in the Gulf of Alaska, especially since this marks the first time in 10 years that a U.S. Navy aircraft carrier is participating in Northern Edge,” said Rear Adm. Daniel Dwyer, Commander, Carrier Strike Group 9. “Alaska is a strategic location, and joint operations and exercises here are essential to the nation’s commitment to maintaining a free and open Indo-Pacific region.”

The exercise, hosted by U.S. Pacific Air Forces, will be conducted in the Joint Pacific Alaska Range Complex, which encompasses more than 60,000 miles of airspace throughout Alaska, and includes support infrastructure from two Air Force bases.

“We’re going outside of our working area. It’s a little colder than we’re used to, but it’s a good thing,” said Cmdr. Silas Bouyer, operations officer of Theodore Roosevelt. “We’ve got to be fully operational, not just when it’s sunny in San Diego.”

The exercise will consist of approximately 10,000 active, reserve, and National Guard, Army, Navy, Air Force, and Marines, and will include scenarios for defensive air combat, close air support, and aerial deterrence of maritime forces.

“Our role in this exercise is to bring multi-capable national assets to an exercise that will improve joint warfighting capabilities,” said Lt. Roger Kim, tactical action officer of Theodore Roosevelt.

NE19 provides Theodore Roosevelt personnel and Carrier Air Wing 11 an opportunity to sharpen their skills and to practice operations and techniques. Also, it allows the Theodore Roosevelt Carrier Strike Group a chance to strengthen relationships with non-Navy commands and to develop cooperative plans and programs with these organizations.

Participants of NE19 will serve as part of a joint task force, which provide support to multi-service integration and exercise a wide range of joint capabilities.

“It’s important because when we deploy, no matter where we deploy, it’s not just a Navy event,” said Bouyer. “We’ll operate with the Air Force airmen, soldiers from the Army, and Marines. If you never spend any time working with those services and then we deploy, it makes having that conversation a whole lot harder if you haven’t trained with them at some point in time.”

Bouyer also acknowledged the importance of Roosevelt Sailors being mission-ready on a moment’s notice.

“If something were to happen, we’ll be ready for it,” said Bouyer. “There’s no second guessing or second thoughts. We’ll be fully prepared and ready and I think it’s because we’re doing something operational.”

The additional time at sea also gives Roosevelt’s crew more opportunities to obtain qualifications and time to get more comfortable in their roles.

“Sometimes you can only perform operational checks while we’re underway,” said Cmdr. Robert B. Beeman, combat direction center officer of Theodore Roosevelt. “Being underway helps with grooming our systems and making sure they’re up to speed.”